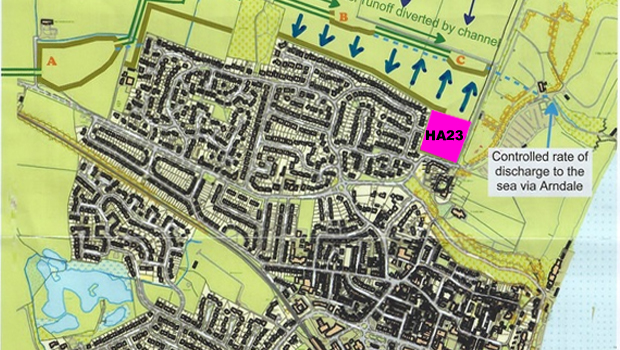 A Letter to the Editor from 80 residents of Filey, protesting bias and incompetence at Scarborough Borough Council Planning Department.

Would you please consider publishing the issues raised in this letter?

There are serious questions of transparency, good governance and questionable practices undertaken by officers and members concerning planned developments in Filey. This concerns the planning permission for housing in the town, with specific reference to the proposed development of land off Church Cliff Drive (Housing Allocation Site HA23).

Scarborough Borough New Local Plan examination in public for housing and other developments in the area has come to a conclusion with the appointed planning Inspector – Mr William Fieldhouse, issuing his final report. The Inspector’s duty was to consider whether the document complies with the legal requirements and ensure that the document is sound and complies with relevant rules and regulations. Copies of the Scarborough Borough New Local Plan (2011-2032) can be found at http://uploads.scarborough.gov.uk/localplanexamination/index.html

80 residents around the proposed site objected to the proposal and the way the site was mis-assessed in the Housing Land Selection Methodology and Assessment (HLSMA). Residents used outside qualified professionals to compile reports and assess the HLSMA and related documents and policies and set up a website to collate information at www.siteha23filey.weebly.com

The arguments against the proposal were substantial but these have been ignored by Scarborough Council forward planning officers and the inspector. Consequently there is the prospect of 30 houses being built on the site. Other housing allocation sites within Filey have also been given permission which means that the housing stock will increase significantly.

The inspector and officers refused to recognise the following points:

At the Filey Town Council planning meeting held 1st September 2014. The minutes from this meeting state that the forward planning officer said that the land in question (then HA21, now HA23) “was at the present time a Flood Zone 3 and until the flood alleviation scheme is in situ there could be NO development on this site until then.”

Filey Town Council submitted a statement at the proposed consultation stage that NO development on this site until Flood Alleviation is completed.

Evidence presented at the examination in public was not accepted that the area is also identified and classified in the Strategic Flood Risk Assessment (SFRA) as a Critical Ground water and Surface water runoff area and a Critical Drainage area; in addition it stands within a Flood Management area.

These extra identified areas on top of a flood zone 1 in the flood risk assessment process qualify the site to follow The Sequential and Exception Tests as recommended in the Strategic Flood Risk Assessment (SFRA), National Planning Policy Framework (NPPF) and Planning Practice Guidance (PPG) for flood zones.

The Sequential and Exception test is to steer new development to areas with the lowest probability of flooding following the ‘Precautionary Principles’ for identified flood zones, whether they are Fluvial, Sea or Ground water/ Surface water zones.

The council have a legal obligation to follow these policies.

All these points have been ignored by council officers.

These two important pieces of information DO NOT appear on the council’s examination in public website.

This example highlights that SBC or the Inspector have not been fully open and transparent with all the information they have received in the examination in public.

Cllr Cockerill stated to residents that all proposed developments are separate and will be dealt with separately. Yet even after the construction of the FFAS and according to the data generated by the plans (Lidar map) it clearly shows that the proposed site HA23 will still be at risk of flooding. Yet SBC officers and the Inspector still feel the site is suitable for housing development.

The website www.siteha23filey.weebly.com contains all the information that has evolved over the Local Plan period, it is accessible to anyone who wants to know more.

People can use the information to support objections for a proposed development on this site.

Residents in principle are in favour of the Filey Flood Alleviation Scheme only.

NOT a housing development within a flood management zone, site HA23.

These issues raise some uncomfortable questions:

To their credit, some members of FTC have raised concerns about some of these projects. But they are not identifying the key common denominators between the projects and not addressing these issues with external and independent bodies whose statutory duty is to examine forensically the planning, implementation and execution of such projects. Given that several projects are taking place within a limited geographical area, within a specific time frame and involving common key players should raise questions. At the very least issues of impartiality, conflicts of interest, management competence and deficits in supervisory frameworks should be addressed. Given the litany of ‘bad and questionable practices’ that have come to light with SBC, then the concerns raised about the events in Filey should not come as a surprise and should be addressed with the utmost haste.

The frustration and growing hostility towards decision makers and the officers employed by the council is becoming more evident amongst residents. The recent vote of no-confidence by Whitby and Filey Town Council was a clear recognition that there are fundamental problems. Residents are being treated in a shameful and disrespectful manner and being failed by their representatives and council officers. Perhaps it is time for residents to make them accountable rather than being ignored?

It is at this at stage that residents feel they should make reference to the Letter to the Editor of the North Yorks Enquirer  from Mr Bob Roberts, titled “Change” on the 12th February 2017 .

“When the voters will undoubtedly hold this council to account for all the miscalculations, the poor decision making and the obnoxious arrogance, etc”

“Who seem to manipulate the system to their own advantage, ignoring established protocols and laws…”

We could not put it better ourselves.

From the 80 Filey residents and objectors to the proposed housing allocation site HA23 Filey.