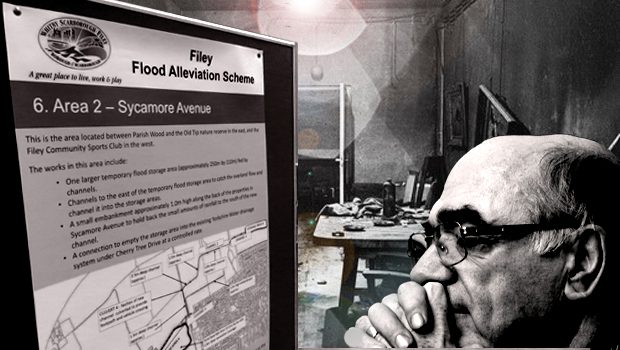 Who oversees the overseer? Who monitors the monitor?

Not to mention crossing the I’s and dotting the T’s.

The latest on The Filey Flood Alleviation Scheme (FFAS); some readers will already be aware of the FFAS; some will not. So a bit of background to start with.

The permissions gave a three-year period for construction to commence, which basically means works had to start before or on Thursday 21st March 2019.

Yorkshire Coast Radio News has featured past statements from SBC highlighting the issues and difficulties with negotiations with one of the Land Owners, on 7th January 2019 and 16th January 2019.

“Negotiations with one of the landowners have reached an impasse that has lead to me authorise an alternative construction option to be explored along a small section of the scheme.

The delays in finalising the land procurement are having a knock on effect on construction procurement, the result of which is that the current planning permission is likely to expire prior to commencement on site, therefore a new planning application will be submitted.

Construction is still expected to be complete this year.”

Then, in the next press release, Cllr Mike Cockerill stated, on the 16th Jan 2019:

Filey’s Flood Alleviation Scheme can now go ahead, after a disagreement with landowners has been resolved

“I am pleased to be able to announce that last Friday, 11th January, I received information that agreement had been achieved with the last of the owners of land on which we expect to construct the Filey Flood Alleviation Scheme, this was confirmed at the meeting of the Major Projects Board.

It is almost three years since planning permissions was granted for the Filey Flood Alleviation Scheme with the final funding being secured late in 2016.

It was hoped to undertake the project in 2017 but the work to secure the detailed agreement from all the owners of the land on which we expect to construct Filey Flood Alleviation Scheme has taken longer than expected.

At one stage, due to the protracted discussions, it was felt prudent to undertake work on a slightly alternative design to ensure that the project could be undertaken in 2019.

It is two years since the discussions commenced and in that time it is likely that there has been an escalation in the costs of construction, we are currently awaiting a revised cost from our potential contractor and this information is expected later this month.

Providing the revised costings are found to be justified and acceptable the contractor could be engaged shortly afterwards with a view to commencing work as soon as possible.”

Great news, all sounds good. Everything agreed, signed and sealed, with two months to implement the FFAS plans before they expire and the residents of Filey finally do get the flood defences to protect their properties.

What can have gone so wrong in this two-month period?

AND WHAT HAPPENS NOW?

SBC has missed the start date of Thursday 21st March 2019 and planning approval has now expired. The FFAS Major Projects team headed by Cllr Mike Cockerill, and including the Planning Services Officers and the Legal Department have collectively missed the boat.

The FFAS will not go ahead due to the expiration of the approved plans. It now appears that the application process will have to start again, from scratch, as Officers and Legal Services have failed in the process to have critical documents completed with the agreements and signed off by the relevant parties. It looks like the mistakes could not be rectified before the approved planning applications deadline date for works to commence, leading to disarray.

So the situation at present is there are NO Approved Filey Flood Alleviation Plans in place; they have expired.

This raises questions over the FFAS Grant Monies given by Central Government and the Environmental Agency. SBC currently hold the grant monies to the value of £5.425 million and have done so for over two years now.

Surely, questions have to be asked over the due diligence and competency of all involved in this case. If this failure had been made by a private company, it would be perceived as a commercial and financial disaster. Would the head of the project and subordinate managers keep their positions?  Probably Not.

Considering the amount of man/woman hours spent and the cost in monetary terms, how much taxpayers’ money has been unnecessarily wasted on this undelivered major project?

You would think three years is an adequate timescale to bring the project to fruition, especially when the scheme had full planning approval in place.

Maybe it’s time for the Borough’s residents to vote for new members, who will get things done within set and appropriate timescales. It is also overdue to question the professionalism and competence of Officers.