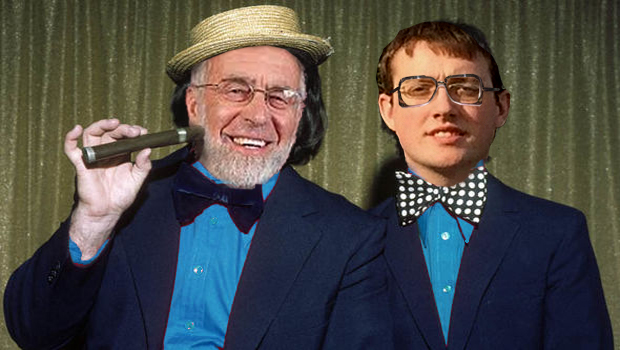 A gloriously acerbic Letter to the Editor from SBC Councillor Michelle DONOHUE-MONCRIEFF [Ind.Ind.] (Hertford), letting some gas out of the desperate Tory pairing in the Hertford (Hunmanby) Ward – Councillor Godfrey ALLANSON and ex-Kipper, ‘Tweeting’ Tom SESTON – who, respectively, appear to have accomplished little and nothing. Laugh? We nearly bought a round!

Over the last couple of weeks I have travelled around the new Hunmanby Ward delivering a newsletter about my work on behalf of residents.  Several things have struck me during this period.

Traditional Conservative voters are not hesitating to express their displeasure at the performance of the Government. They are also unimpressed by Cllr. Derek Bastiman’s and Chief Executive, Jim Dillon’s taxpayer funded trip to Paris. This is a type of extravagance that Conservative voters really despise. It epitomises their belief that national and local politicians are out of touch with voters.

More interestingly, I get a lot of recognition for the articles I publish on the North Yorks Enquirer. Four years ago, I would have dismissed the NYE in terms of its impact on voters and relied on traditional media to get my message out. This is no longer the case as the failure of both the Scarborough News and Yorkshire Coast Radio to report on my exclusion last year has led Hunmanby Ward residents to the NYE in order to find out what SBC does not want them to know. It also means that the local Conservatives have lost control of the narrative when it comes to the local elections on 2nd May.

One phrase has been repeatedly used by residents about our local Conservative Councillor. They describe him as a SBC Yes-Man. They believe that SBC is full of Yes-Men and Yes-Women who are not standing up for residents, even when the Council is clearly in the wrong. How many of you throughout the Borough think the same about your Councillor? Well you are not alone. There is a strong desire for Councillors who “ruffle feathers” at our Town Hall. I think I fall into the ruffling feathers category.

I was awaiting the Conservative response to my newsletter. They need two seats in Hunmanby Ward to have a majority on SBC. After all, the Thirsk & Malton constituency is one of the safest Tory seats in the country. This should be easy territory for local Conservatives.

On Saturday, as I was driving home, I saw the Tory election machine (Cllr. Heather Phillips, Cllr. David Jeffels, a male activist and a young activist who I knew from previous campaigns) out leafletting on the street where I live. Imagine local Conservatives risking life and limb to be in close proximity to my home.

When I read the leaflet, I was somewhat surprised as it was full of basic errors and claims that simply aren’t true. Let me give you an experienced political campaigner’s review of the Conservative’s ‘Intouch’ leaflet for Hunmanby Ward.

First, we have the candidate photographs. The second candidate, Tom Seston, is so enthusiastic about winning the election that part of his face is missing. I cannot think of any circumstances in which this photograph would be allowed to go to print. Could they not have taken a proper photograph? Clearly standards at Scarborough and Whitby Conservative have dropped drastically.

Under the heading of “Village Halls – The lifeblood of our communities”, there is a totally unrelated piece about the candidates. Cllr. Allanson states that he was responsible for “preventing a traveller’s site in Hunmanby”. Now he wanted to use this in our 2015 election leaflet. I have to admit I cringed when I saw it back then. The main reason is that the aforementioned “traveller’s site saga” is at least 25 years old. Now I don’t dispute that Cllr. Allanson may have been involved but most residents who remember that period always say it was the late Cllr. Denis Peddar who led the charge on that particular issue.

Allanson goes on to claim that he was responsible for speed limits in our villages. Conveniently forgetting that the then County Councillor John Blackburn also claimed credit for these improvements. As this is a County Council responsibility, the latter probably has the greater claim to the credit.

As for Tom Seston, whom I have met a few times and find him to be a likeable young man. The claim that he “has worked on a number of local issues” is simply not true. Seston has no connection with Hunmanby or its surrounding villages and has done nothing for our local area. Local residents are already asking who he is and I am only too happy to oblige.

We then have a piece on defibrillators. Now no one could disagree with this noble cause. Yet, our local councillor claims to have “supported” Parish Councils in this endeavour. However, as one resident told me on Saturday, Godfrey says he “supports” you but doesn’t actually do anything. Now, I know that the defibrillators in Hunmanby and Flixton were installed without either myself or Cllr. Allanson having to do anything as the Parish Councils did all the work. So Cllr. Allanson, is the resident right about your “support” being words not action?

We then move into the out of touch element of the “intouch” leaflet. Apparently there was a “recent survey”. Only problem being I can’t find a resident who received a survey. So who did they survey? People in Outer Mongolia?

Yes there is a lot of concern about speeding in villages. The Conservatives mention Community Speed Watch scheme. However, our out of touch Councillor doesn’t seem to know that Hunmanby Parish Council only recently tried to set up a Community Speed Watch but North Yorkshire Police said they didn’t qualify. Surely Cllr. Allanson knows this?

Turn over to the other side to the news that “42miles of Yorkshire Coastline Protected”. There is a major problem with this. The coast line in the old Hertford Ward is not part of the scheme. Now this is getting really embarrassing.

There is a brief mention of the new residents’ parking scheme but they fail to tell readers where to apply.

If finishes with, “Your Conservative Voices” for the local area. Strangely, only Cllr. Allanson is featured in the photograph. I wonder have Allanson and Seston actually met? Tom Seston doesn’t even give his home address. The reason being that he doesn’t live in the ward.

There also be another ulterior motive behind the shy Seston’s candidacy. I suspect that Seston is being used by Allanson as a sacrificial electoral shield. In 2011, he did the same with a young Conservative activist, Melissa McDonald telling her he would do all the work in the campaign. Allanson was openly admitting that the Green Party Councilor, Nick Harvey would be re-elected and he would settle for a “good second”. I do hope young Tom Seston has had his role explained to him by the local party.

As we approach the 2nd May SBC elections, there will be many more of these so-called “intouch” leaflets arriving through letterboxes across our Borough. I ask you to consider why is it so hard for serving Councillors like Allanson to produce a leaflet with real achievements for their residents? It certainly explains why Kevin Hollinrake MP does not have one issue he can give local Conservative Councillors credit for. Even he has found solace in the arms of an Independent.

Afterall, speaking up for voters is not rocket science. It is time to say No to the SBC Yes-men. Make the 2nd May your Independents’ Day.