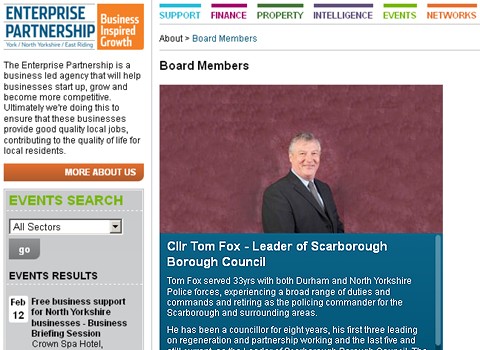 It is also alleged that the local Police in Scarborough knew what was going, on but left them alone because of Savile’s celebrity status and Mr Jaconelli’s position as Councillor and Mayor.

The official position of North Yorkshire Police was:

This was despite the fact that in 2003, North Yorkshire Police conducted a major paedophile investigation in Scarborough.

Two men were jailed for abusing girls in the ‘Eighties – John Thomas White was jailed for 20 sex offences. Another man, Brian Rutter, was later cleared on appeal.

According to press reports, Savile’s name was constantly mentioned to police in connection with their enquiries, but they completely ignored this line of enquiry and Savile was never even interviewed by North Yorkshire Police although they had received allegations concerning his offending .

The Metropolitan Police investigation into Savile (Operation Yewtree) has now been published and it gives a geographical distribution of Savile’s offending, which (predictably) is centered around the locations he was associated with.

It reveals that offences were committed in twenty eight police force areas.  In order of offending these are:

A detailed summary may be found here:

In fact, it is now quite clear that a local connection did exist, as Corruption Busters originally alleged and Operation Yewtree has now confirmed.

It was obvious to Real Whitby investigative-journalists, from studying Savile’s modus operandi, that his offending was centered around locations familiar to him and we therefore fully expected him to have committed offences in Scarbrough and Whitby.  Hence our decision to commence our investigation, despite the fact that North Yorkshire Police were keeping remarkably quiet about Savile. They did not even search his flat in Scarborough.

Detectives from Operation Yewtree identified Savile’s peak period of offending as between 1966 and 1976; the period he was living in Scarborough and visiting schools and clubs there, and visiting Whitby.

We suspect that the pattern of offending was much worse in Scarborough and Whitby than has yet emerged, because of the reluctance of victims to come forward and the itinerant nature of some of Savile and Jaconelli’s victims who were young, unemployed and/or disadvantaged people drawn to the seaside town.

Clearly this latest information from Operation Yewtree has completely vindicated our concerns.

Savile and Satanism in Whitby

In a separate strand of our Savile investigation, Nigel Ward uncovered evidence of Satanism, linking Savile to Satanism in Scarborough and Whitby associated with a location in Whitby that had a rituals room with a whipping-post in it called “the Chamber”.

The Express has now run a story confirming Nigel’s disclosures that Savile was involved in Satansim associated with serious sexual offences, as Nigel had originally indicated.

Finally, we developed a third line of enquiry concerning the activities of Mr Alan Franey, a close friend of Savile’s from the Leeds General Infirmary where he was a member of the management, thought to be part of his Scarborough set and also the General Manager at Broadmoor who allowed Savile complete access to the patients, some of whom he abused.

Mr Alan Franey knew Jimmy Savile through their joint membership in a running club based in Scarborough.

A member of the public contacted Corruption Busters and pointed out that Savile’s close friend Mr Jaconelli (who is also alleged to be a member of the Scarborough vice-ring)  was on the “Jimmy Savile: This is Your Life Show” at which Mr Alan Franey, described as ‘a close friend’, was also present.

All of the above information has been passed to Operation Yewtree and the NHS enquiry led by Ms Kate Lampard QC, which has yet to report.

So what is the response of the North Yorkshire Police to all of this?

Despite apparently having received information that Savile and Jaconelli were abusing young people in Scarborough and Whitby, North Yorkshire Police apparently did nothing.

North Yorkshire Police have continued this policy, thereby attracting national press criticism for not even searching his Scarborough home.

Nor have they searched the whipping-post “Chamber” in Whitby. Other than the above press release, they have remained silent and have offered no explanation or expression of regret for failing to intervene and arrest Savile.

Well, why should this be?

Savile was an experienced and capable man and is alleged to have routinely bribed Police Officers.

Inspector Mick Starkey of West Yorkshire Police worked as a bodyguard and driver for him, and was one of eight serving/retired police officers who met regularly with Savile at his home in Leeds, for his self-styled ‘Friday Morning Club’ for over 20 years.

We do not yet know who the other seven were, or if any were from North Yorkshire Police.

Savile was closely associated with the Mayor of Scarborough Mr Peter Jaconelli, who has been alleged to have been one of the paedophiles who operated in the paedophile-ring in Scarborough of which Savile was a member, but it is alleged they were left alone by the police because of their celebrity status.

The former Chief Inspector who commanded policing in Scarborough for part of the Savile period was Tom Fox, now Councillor Tom Fox, Conservative Leader of Scarborough Borough Council, who, with his wife ex-Councillor Ros Fox, is deeply implicated in the recent double-dipping scandal.

It was Councillor Tom Fox that recommended Savile to be honoured as a Freeman of the Borough, such was his popularity and importance there.

Clearly these revelations are embarrassing for the North Yorkshire Police and for Councillor Tom Fox.

Further revelations could lead to more embarrassment or even criminal charges.  Nevertheless North Yorkshire Police still has a duty to investigate crime and misconduct, and consider if any lessons can be learned.

In this context, Corruption Busters wrote to North Yorkshire Police on the 28th of October 2012 with a Freedom of Information Request as follows:

1.        Did Mr Peter Jaconelli of Scarborough (died 1999) ever come to the attention of North Yorkshire Police, in connection with sexual offences?

2.        Did Mr Jimmy Corrigan (deceased) of Scarborough ever come to the attention of North Yorkshire Police in connection with sexual offences.

3.       The name and rank of the officers who commanded North Yorkshire Police at Scarborough from the period 1970 – the present.

4.       The name and rank of the officers who commanded North Yorkshire Police at Whitby from the period 1970 – the present.

5.       The date that North Yorkshire Police had access to computer/paper/card index records of investigations involving other forces.

6.       The number of unsolved sexual offences against children in Scarborough from 1970 – present.

7.       The number of unsolved sexual offences against children in Whitby from 1970 – present.

8.       If any member of North Yorkshire Police has ever been arrested and/or charged in connection with sexual offences against children.

9.       If any member of North Yorkshire Police has ever come to the attention of the Police, in connection with sexual offences.

10.   Force policy in relation to protecting vulnerable young people at seaside towns in the period 1970 – the present.

I received no response, although this is contrary to the Freedom of Information Act.

And why are they admitting to only two complaints about Savile on their website, when the current total is at least eight?