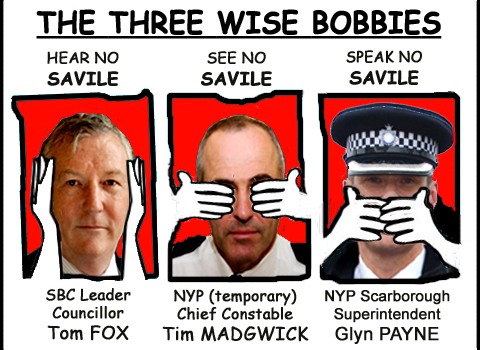 Following the furore over Jimmy Savile after his exposure by the former Surrey Police Detective Mark Williams-Thomas in the ITV programme “Exposure:  The Other Side of Jimmy Savile”, Real Whitby investigative-journalists have been conducting an investigation into Jimmy Savile and his activities in Scarborough and Whitby, locations largely ignored by the national media.

In his follow up programme, shown on Wednesday the 21st of November, Mr Williams-Thomas commented on Savile’s activities at Broadmoor Secure Mental Hospital, Leeds General Infirmary and Stoke Mandeville Hospital.

Savile is alleged to have committed a variety of offences at Stoke Mandeville, ranging from indecent assault to rape, which were reported to staff and ignored.

At the time of writing, there is no mention of the abuse allegations on the hospital website. The only mention of Savile posted after the 3rd of October (when Mr Williams-Thomas’ allegations were first made public) praises his fundraising activities and refers to him as Sir Jimmy Savile.

However, it is the incredible revelations about Broadmoor and the link to his “Scarborough and Whitby set” that principally concern this article:

Mr Franey was interviewed on the ITV programme and (incredibly) confirmed that he allowed Mr Savile access to every part of the supposedly secure hospital except patients bedrooms.

It therefore seems to me that Mr Franey’s decision to allow Savile’s access was extraordinary; particularly as former members of staff – many of them experts in recognising psychiatric disorder – have alleged it was well known that Savile was a threat and have also alleged that complaints about him were routinely ignored.

So why should Mr Franey ignore procedures to restrict access, which were designed to protect patients and staff and which it was his duty to uphold?

And why would Jimmy Savile sponsor Mr Franey’s appointment to a sensitive and specialist rôle requiring extensive experience in security, mental  health and the criminal justice system when he had no experience in any of these critically important fields?

Mr Franey, was a very close personal friend of Savile and they maintained this lifelong friendship long after they had both departed from Broadmoor, right up until Savile’s death.

They first met at the Leeds General Infirmary when Savile worked there as a volunteer porter and where Mr Franey was a member of the management team from 1975 to 1985. They socialised together and he was a close member of Savile’s set. It has been alleged that Mr Franey’s used to drive Savile around nightclubs in Leeds in the 1980s, although Mr Franey denies this.

The programme alleges that Savile requested Mr Franey for appointment to Broadmoor and was present when the rôle was discussed with Mr Franey by civil servants at Savile’s private club in London (the Athenium).

Mr Franey had no experience in secure hospitals, the mental health system or criminal justice system, but was nevertheless appointed to a senior role in Broadmoor in 1988 – where this experience would normally have been a pre-requisite – at Savile’s own request, and stayed there for nine years.

According to the Telegraph, Mr Franey took early retirement from Broadmoor following an inquiry into the hospital in March 1997. The inquiry followed claims made in newspapers that a child pornography-ring was operating at Broadmoor.

Although the full report was never published, a summary found no evidence to support the allegations but made some criticisms of lax security while pointing out the hospital had actually improved under Mr Franey’s management; this despite the fact that Savile could “come and go as he pleased”.

Mr Franey is vehement that he only resigned because he wished to write a book and was ready to retire.

An inquiry into Ashworth Special Hospital in 1999 found serious concerns about security and abuses that came about from poor management and as a result, the security at all secure mental hospitals was reviewed. In 2003, the BBC reported that there had been allegations of high levels of sexual abuse of female patients at Broadmoor and that reports of abuse were routinely ignored.

The Scarborough and Whitby connection

Mr Franey, along with Mr Jimmy Corrigan, Mr Neil Littlewood and Mr Howard Silverman, gave a tribute to Jimmy Savile on “This is Your Life”, and they were collectively described as ‘special mates’ who all ran marathons together with Jimmy Savile. A clip is available here, where they are all shown (at 5m39s) wearing their uniform club running strip.

How can it be right for someone whose friendship for this man was so close to be put in charge of him at Broadmoor? How could he be expected to maintain detachment and exercise impartial control over him?

Could it be that Jimmy Savile – a highly intelligent, ruthless and cunning man – selected Mr Franey for the post precisely because he knew he could not? We will never know.

One of the Real Whitby articles on Savile contains a photograph of Jimmy Savile and his close friends from his running-club, running in Scarborough, including the late Mr Jimmy Corrigan. They are all shown wearing their uniform club running-strip.

Mr Franey’s friends, Mr Corrigan and Jimmy Savile, have been alleged in the national press to have been ‘persons of interest’ to North Yorkshire Police during an investigation into a paedophile-ring in Scarborough in 2003.

This ring is alleged to have included a number of highly influential people, including His Worship the Mayor of Scarborough Mr Peter Jaconelli (also of interest to the Police in 2003) and, of course, Jimmy Savile himself. As a result of the 2003 investigation two other men were convicted of abusing girls in Scarborough; John Thomas White was jailed for 20 sex offences. Another man, Brian Rutter, was later cleared on appeal.

Real Whitby investigative-journalist Nigel Ward has independently established that some members of Savile’s “Scarborough and Whitby set” including Jaconelli were active in Whitby in a group they called “the club” which it is alleged had access to a room with a “whipping post” in it.

According to press reports, there were allegations about Savile made during the 2003 police investigation, yet they ignored this line of enquiry and Savile was never even interviewed by North Yorkshire Police.

The North Yorkshire Police position on Savile is:

Although it is absolutely clear that a prominent local connection did exist and according to at least one Real Whitby reader/commenter the Police must have known about it:

There is a pattern emerging here; a pattern of complaints about Savile being universally ignored by the various authorities at the major Saville locations because of his status and connections.

Esther Rantzen appeared on the ITV Exposure documentary, responding to the allegations about Jimmy Savile’s sexual assaults on young girls, and admitted she had known of the rumours and had not done anything. As a consequence the dedicated campaigner against child abuse was removed as one of The National Association for People Abused in Childhood (NAPAC) patrons, after a lifetime of devoted service to the protection of children.  Another of Savile’s victims, who at least had the honesty to confirm what was actually going on.

The ITV programme aired on Wednesday last alleges that although complaints were made about Savile to the Police in Leeds, they were ignored and associates of Savile have alleged that he routinely bribed police officers there.

Mr Savile’s PA has alleged that Savile’s fundraising was so important to Stoke Mandeville Hospital and complaints would have been ignored because of his celebrity status and because his fund-raising activities were too important to the hospital.

Mr Franey stated that he has no recollection of Mr Rowden’s complaint at Broadmoor and that it was not Mr Rowden’s place to raise these concerns anyway. This, of course, is incorrect. All members of staff have a duty to report anything which endangers patient safety or the security of the hospital.

Further, if Mr Franey had ensured that the normal security procedures for a secure unit had been observed, or Mr Rowden’s concerns had been addressed, the vulnerable patients Mr Franey was responsible for would have been protected and perfectly safe from his close and dear friend Mr Savile.

The former Chief Inspector Tom Fox commanding policing in Scarborough even recommended Savile to be an Honorary Freeman of the Borough when, as Councillor Tom Fox, he was also Leader of the Council!

It appears that North Yorkshire Police and the press backed off from investigating Savile because of his prominent position and friends, as everyone else did. The then Chief Inspector Tom Fox, who commanded policing in Scarborough at that time, even recommended Savile to be an Honorary Freeman of the Borough, when as Councillor Tom Fox he was Leader of the Council, after Savile had been the subject of police interest in 2003!

To be fair, North Yorkshire was probably no different in relation to Scarborough and Whitby.  Jaconelli was a prominent local business man, Scarborough Councillor, County Councillor and the Mayor of Scarborough. Jimmy Saville was a major media-personality connected at the highest levels in Yorkshire, nationally and internationally, who cultivated close relations with the Police and is alleged to have routinely bribed Police Officers.

Although Real Whitby has developed a lot of fresh information on Savile and his associates in Whitby, which was previously unknown and have formally passed this information to North Yorkshire Police through the force website, in response North Yorkshire Police have not acknowledged it or confirmed what action they have taken over it, nor have they contacted us or shown any interest in responding or aggressively investigating this matter.

In short, they appear to be adopting exactly the same ineffective response now, that they did when Savile was alive, presumably to escape any criticism over their failure to arrest him.

Councillor Fox is refusing to comment on what he knew when he was responsible for policing in Scarborough. Neither the Chief Constable or the then Chief Inspector Fox (Retired) have offered any explanation for the failure of their force to protect local people by breaking up a paedophile-ring that was operating fairly openly in the area, or indeed any apology or expression of regret for their failure.

They have confined their actions to removing all traces of Savile from Scarborough, and although we continue to hope for a full statement, as it currently stands their position remains the ridiculous and blatantly untenable:

One detects here the pungent tang of bullshit in the rarified atmosphere surrounding Chief Inspector Tom Fox (Retired) at his new office at the Town Hall.

It is time for Chief Inspector Fox (Retired) and Chief Constable Madgwick to clear the air with a full statement.