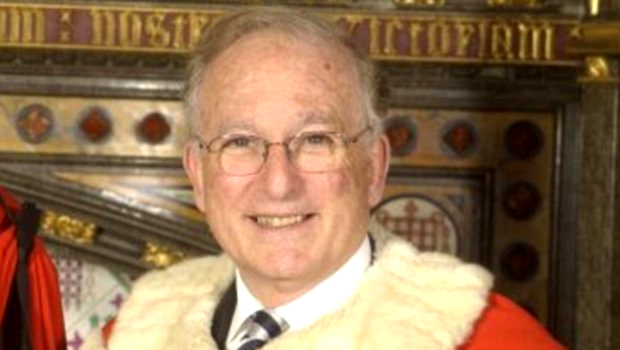 Janner:  Leicestershire Police Refers Itself To The IPCC

Despite ample evidence of crime, Lord Janner of Braunstone was allowed to escape prosecution for raping and abusing children. Excellent article from the Daily Mail here, giving the full incredible details.

Briefly, it is alleged that Janner abused and raped children from about 1969 onwards. He befriended another rapist Frank Beck, who ran a children’s home in Leicestershire, to obtain access to vulnerable children in the home, whom he could abuse. Although there was enough evidence to charge Janner and a realistic chance of a conviction, Beck got five life sentences and died in prison. Janner was never charged.

So despite three previous investigations, the Labour politician and Queen’s Counsel, who served as an MP between 1970 and 1997, was never charged. Hardly surprising given that he was being protected by the Police and CPS, the same as Cyril Smith, Peter Jaconelli, Jimmy Savile, Lord Boothby and Jeremy Thorpe. It also emerged that the DPP at the time was not informed.

Lord Macdonald, DPP from 2003-2008, has been quoted on the BBC as confirming that any case involving a prominent person should have been handled in the CPS Headquarters in London, not in Leicester:

In short, it was all kept nice and local within Leicestershire, where as an MP and prominent lawyer, Janner may have known the Police and prosecutors who were deciding his case. How very cosy.

Although there is enough evidence to arrest and charge Janner, no further action is to be taken, because he is suffering from Altzheimer’s disease and not, therefore, fit to stand trial. The decision not to charge Janner was made by the Director of Public Prosecutions Dame Alison Saunders, and it is reported that she rejected the advice of a leading sex abuse authority to prevent charges being preferred.

“Thanks primarily to the courage of 25 victims who have made a complaint and the complete professionalism of the investigation team, we have built a case that the DPP has acknowledged is the result of a thorough investigation, evidentially sufficient and gives rise to a realistic chance of conviction. There is credible evidence that this man carried out some of the most serious sexual crimes imaginable over three decades against children who were highly vulnerable and the majority of whom were in care. I am extremely worried about the impact the decision not to prosecute him will have on those people, and more widely I am worried about the message this decision sends out to others , both past and present, who have suffered and are suffering sexual abuse.  We are exploring what possible legal avenues there may be to challenge this decision and victims themselves have a right to review under a CPS procedure.”

Mrs Saunders’ decision is currently being reviewed by a senior lawyer.

Request for investigation of this fiasco

So many times now, we have learned of high-profile paedophiles escaping justice, because of MI5, the Police and the CPS. The Peter Jaconelli/Jimmy Savile ring – which operated openly in Scarborough for forty years, with the full knowledge and protection of North Yorkshire Police – Jeremy Thorpe, Lord Boothby and Cyril Smith.

Yet no Policeman or CPS lawyer has ever stood trial for misconduct.

The North Yorks Enquirer believes that so long as there are no consequences for protecting a wrong-doer, cover-ups will continue to happen. It is essential that we get to the bottom of what happened and who covered it up – so they can be prosecuted in the public interest, to act as a deterrent to other officials tempted to conduct cover-ups in the future.

To this end I wrote to the Director of Public Prosecutions on the 19th of April 2015 asking her to commence an investigation into the CPS lawyers that failed to follow CPS procedures and failed to prosecute Janner, although they had enough evidence to do so.

The response of the CPS

I received no response from Mrs Saunders at all, not even an acknowledgement.

For some time, the North Yorks Enquirer has been pursuing an even older and more serious alleged establishment cover up, that of Jeremy Thorpe, who was acquitted of conspiracy to murder, in the 1970’s. It has been alleged that he may have had one of his lovers murdered. It has also been alleged that the Police suppressed evidence to protect Thorpe. We have received no response from Mrs Saunders to our correspondence on this enquiry either. So Mrs Saunders’ refusal to respond to correspondence – although she has a duty to do so – was no surprise.

It now appears that, under her leadership, the CPS will expend unlimited resources on prosecuting journalists and celebrities, but it will not address issues of misconduct in its own ranks.

The response of Leicestershire Police

The response of Leicestershire Police was even more astonishing.

I received a letter from the force Professional Standards Department essentially confirming that because I was not a victim under Section 12 of the Police Reform Act 2002, I could not make a complaint against Police Officers concerned and therefore Leicestershire Police did not need to take any action. This was despite the fact that there was credible and overwhelming Police evidence in the public domain that there had been misconduct by Leicestershire Police Officers in the investigation of serious crimes committed by Lord Janner.

I was not surprised by this response.

It was exactly the same initial response that I had from North Yorkshire Police when I made a complaint against Assistant Chief Constable Sue Cross, following our exposure of her disgraceful investigation into Peter Jaconelli and Jimmy Savile.  Of which, more later . . .

Being both determined to get to the truth and persistent, I then wrote to the Chief Constable Simon Cole of Leicestershire Police, bringing his attention to the evidence of Chief Constable Creedon, who has admitted that he succumbed to unlawful pressure from senior Officers in Leicestershire Police to block a criminal investigation into Lord Janner.

I pointed out that the then Detective Sergeant Creedon’s duty was to disobey these orders and to see the investigation through to conviction. It therefore appears that Chief Constable Creedon may also have committed an offence, whilst serving as a junior Officer in Leicestershire Police, the consequence of which was that a dangerous criminal escaped justice.

Having written to Assistant Chief Constable Bannister, asking him to initiate a criminal investigation into this aspect of Operation Enamel and having my request rejected, this nevertheless did not change the fact that his force had credible evidence from Chief Constable Creedon of crime, committed by Police Officers, and he had a clear duty to investigate it.

Having had many years of experience with North Yorkshire Police, I settled down to await another brush off.  I was therefore genuinely and pleasantly surprised by Chief Constable Cole’s response:

Thank you for your email dated 10 May 2015, in which you have referred to Operation Enamel and the role of Police Officers within that investigation.

I am responding on behalf of Chief Constable Cole.

Leicestershire Police have referred this to the Independent Police Complaints Commission (IPCC), who have confirmed that they are conducting an independent investigation into the matter.

Now this decision has been taken it would be inappropriate to make comment on any of the issues to be investigated until the IPCC has completed its work.”

Clearly an appropriate and principled response; better late than never.

The wider implications of this referral

This is the second time that a Police force has voluntarily referred itself to the IPCC as a result of pressure from the North Yorks Enquirer.

In both cases it was blatantly obvious from the start that there was sufficient evidence of misconduct for the IPCC to be called in but both forces initially stone-walled to resist it.

In the first case, following information from the NYE, the IPCC directed North Yorkshire Police to investigate what it knew about Jimmy Savile. The result was the now completely discredited investigation by Assistant Chief Constable Sue Cross , denying all knowledge of any offending by Peter Jaconelli or Jimmy Savile. Although their offending in Scarborough was well known to Police and public.

Subsequently, following a BBC Inside Out Documentary featuring the NYE team, NYP was forced to re-open the Jimmy Savile and Peter Jaconelli enquiry.

In a shameful and humiliating climb-down, North Yorkshire Police was then forced to refer itself to the IPCC – less than two months later. 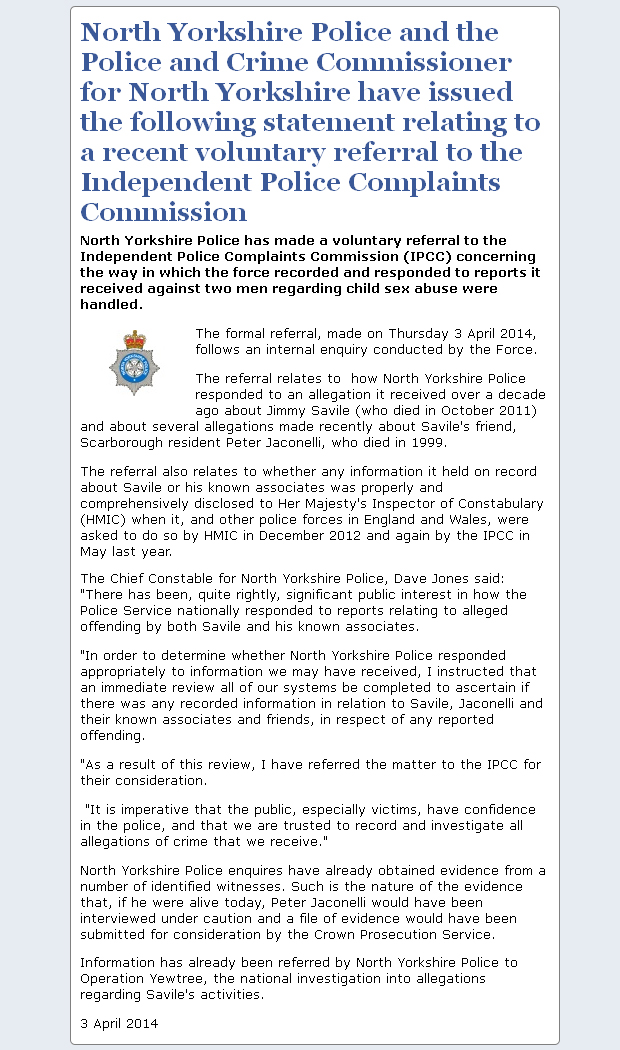 In December 2014, following the conclusion of the investigation, North Yorkshire Police issued another statement admitting that “the police missed opportunities to look into allegations against these men (Savile and Jaconelli) whilst they were still alive” – essentially admitting that the allegations that the NYE team and others had been making for two years were true, despite repeated public denials from North Yorkshire Police.

Whilst we suspect that this may not have endeared the North Yorks Enquirer or its style of investigative journalism to North Yorkshire Police, the reality is that public bodies like the Police and the CPS simply will not investigate allegations of misconduct in their ranks impartially. Only by being determined, persistent, pointed and relentless was the North Yorks Enquirer able to overcome the inertia and power of public bodies to stone-wall legitimate concerns.

Hence, the need for the style of investigative journalism that the North Yorks Enquirer practices and similar media pressure from a free press, to overcome the bureaucratic intransigence of public bodies and their determination to avoid admitting to misconduct.

Under these circumstances, it is essential and in the public interest that journalists are free to hold public bodies to account, to force them – where necessary – to take the action that they should themselves take impartially as a matter of course.