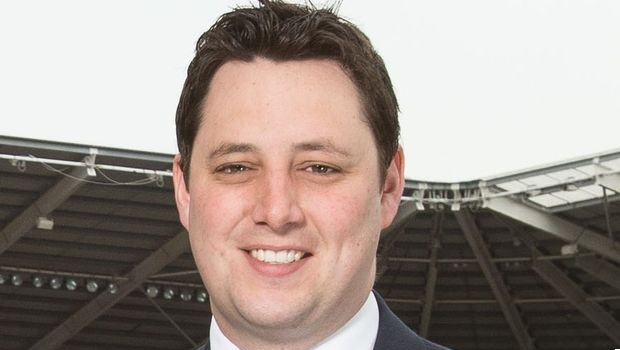 Readers of the Enquirer from the Scarborough area and points south may not be especially familiar with the name Ben HOUCHEN (36), Tees Valley Mayor [Con.] (pictured above), the North East’s new ‘Golden Boy’ of Conservative opportunism. He has been glowingly described as the protégé of the Rt.Hon. Sir Robert GOODWILL [Con.], the former Minister of Fisheries and incumbent MP for Scarborough & Whitby, whose support for the shellfish industry has been conspicuous by its asbence in recent weeks.

Mr HOUCHEN certainly has some brass; but ‘Golden Boy’ may be about todiscover that only fools take brass for gold.

I came across Mr HOUCHEN on the back of my interest in, and support for, the “Reclaim Our Sea” WAVE campaign for a proper and exhaustive investigation into the cause of the staggering mortality rates amongst crabs, lobsters and other crustaceans along the coast from Seaham down to Whitby. Linked to the highy abnormal die-off of unknown thousands of crustaceans, seabirds too have been washed ashore in disturbing numbers. The ‘official’ explanation for the die-off – algal bloom – has been dismissed by two independent investigations and the real culprit seems to be high concentrations of the toxic chemical pyridine, released from seabed sediment by the massive dredging operations carried out in preparation for the proposed Teeside Freeport.

The Enquirer has featured two appeals recently (well worth revisiting) in support of the “Reclaim Our Sea” WAVE campaign to suspend dredging until the cause of the sealife mortalities has been positively identified and necessary mitigation devised and implemented:

Mr HOUCHEN is a fervent proponent of the proposed Teeside Freeport – he no doubt wishes to turbo-charge his political ambitions by staking claim to being “the man who brought prosperity back to the North East”. (The Tees Valley area comprises the five Boroughs of Middlesbrough, Stockton-on-Tees, Darlington, Hartlepool, and Redcar & Cleveland).

This may be laudable – but it does not justify using dirty smear and slur tactics against campaigners? Probably not. So when I saw Mr HOUCHEN’s horrid little Tweet (see below), I decided to ask him what his game was.

Having seen the Royal Society for the Protection of Birds (RSPB) statement to which Mr HOUCHEN refers, I wrote to him to give him his ‘Right of Reply’ ahead of publication of this article:

My name is NIGEL WARD. I am a regular contributor to the North Yorks Enquirer. I also provide evidenced background material to Private Eye magazine.

I write to request a comment from you (your ‘Right of Reply’) in respect of a comment published on social media under your name: 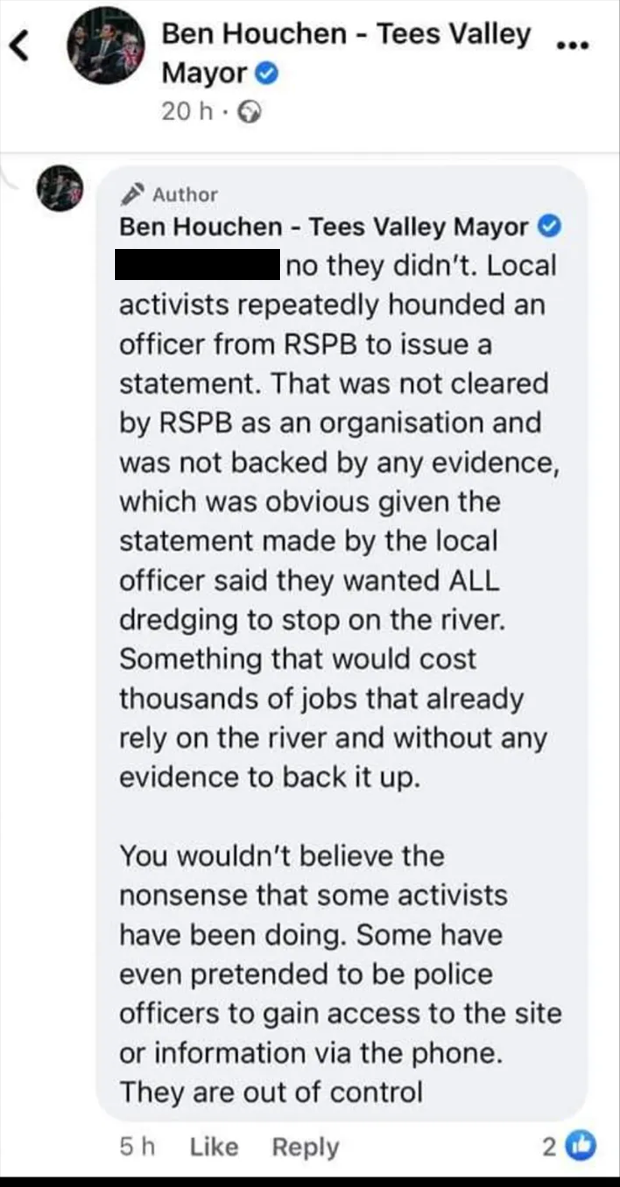 In the interests of openness and tranparency, I can inform you that the North Yorks Enquirer has had sight of a more recent RSPB email contradicting your comment.

Specifically, it denies any attempt at ‘hounding’, bullying or coercion and re-iterates unqualified support for the Wave campaign.

Before reporting on the matter, I wish to give you the opportunity to qualify or withdraw your allegations. Or provide an appropriate apology to the campaigners. You may wish to substantiate your allegation that “some” campaigners have impersonated a Police Officer – a criminal offence.

Please provide your response (not exceeding 250 words) either directly to me or to the North Yorks Enquirer at:

My report will include such comment as you are willing to provide, or the fact that you have failed to respond, whichever is the case.

Please be so good as to provide, in e-format, a current image of your likeness, in landscape aspect, not smaller than 620 x 350 pixels. Thank you.

My regards to you for a fine and relaxing weekend. I look forward to hearing from you.

Mr HOUCHEN has not responded. But an inside source assures me that he did indeed read my email – and forwarded it to his Legal Department (from whom I have also heard nothing).

Now let us take a look at the official RSPB statement on this vitally important issue:

On request, RSPB Head Office has since confirmed:

“ This is an official statement and did come from us – it was issued by the England comms team with support from local staff.”

A local RSPB Officer has also confirmed that:

“We’ve had no contact with Ben Houchen so he’s just making assumptions on his own…There’s been no bullying. I guess he just doesn’t like what we’ve said…Our position is clear and has not changed.”

I subsequently discovered (courtesy of BBC Radio 4) that Mr HOUCHEN had been running off at the mouth about the campaigners being “conspiracy theorists” who propagate nonsense:

“It’s not just pyridine, they think it’s Agent Orange apparently from secret factories in the Second World War. We’ve also been told that it’s Russian submarines trying to cause problems for the UK government.”

We seem to have on our hands a politician who habitually tells porkies in service of his own agenda – hardly a novelty. Yet it seems fair to say that Mr HOUCHEN has gone to some lengths to infuse himself with every available byte of information about untreated waste. One could say he has internalised it.

One might even say he is full of it.

It turns out that there is quite a back-story to Mr HOUCHEN – and who better to tell it than our old chums at Private Eye? 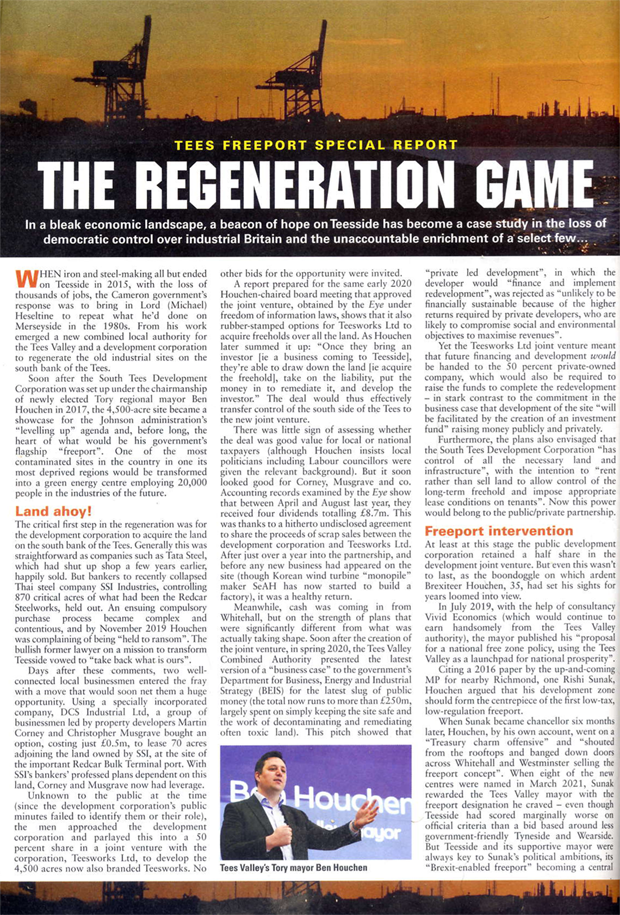 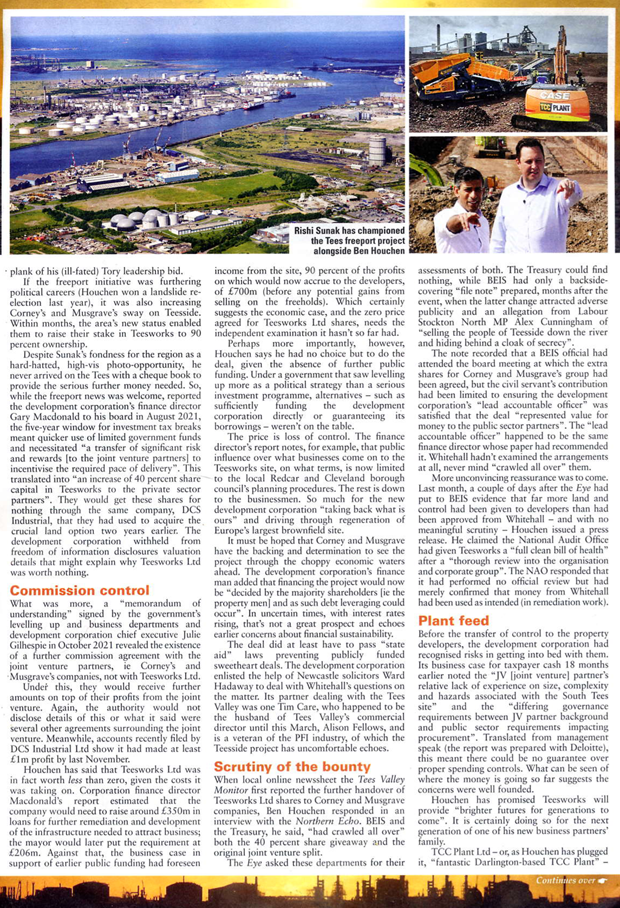 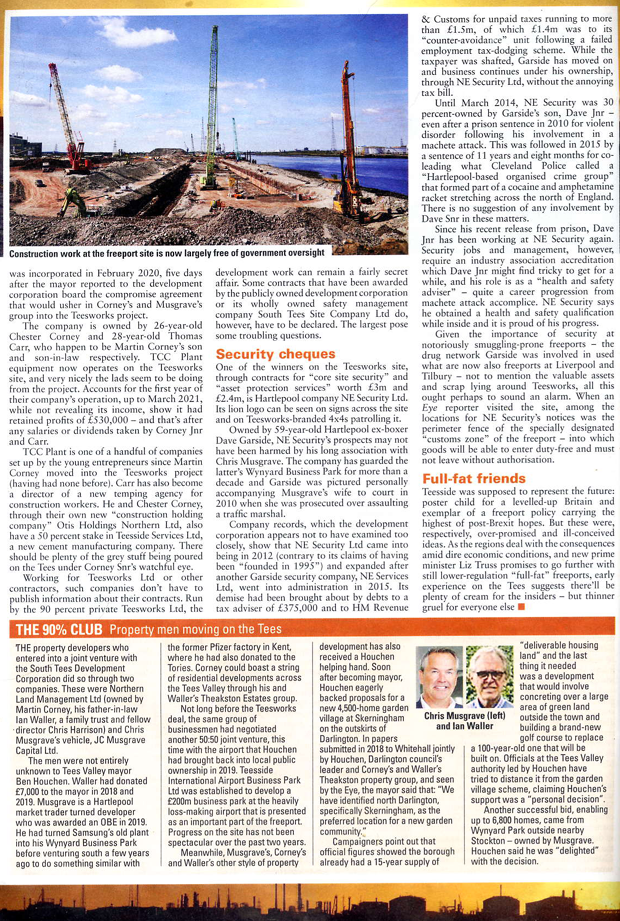 (Readers who struggle with the small font size may wish to download the article in PDF-format, here).

It needed only a very swift Google to elicit the following headline from the Mirror, casting further aspersions on the integrity of Mr HOUCHEN, to lower my opinion a further notch: 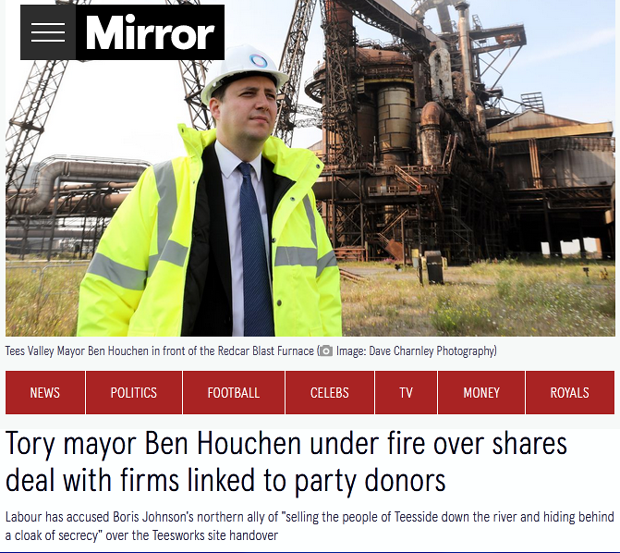 Mr HOUCHEN’s determination to be a ‘mover and shaker’ in the North East seems to have been hampered along the way by some ‘absolute beginner’ mistakes.

The following report from The Times shows him in a very poor light indeed. 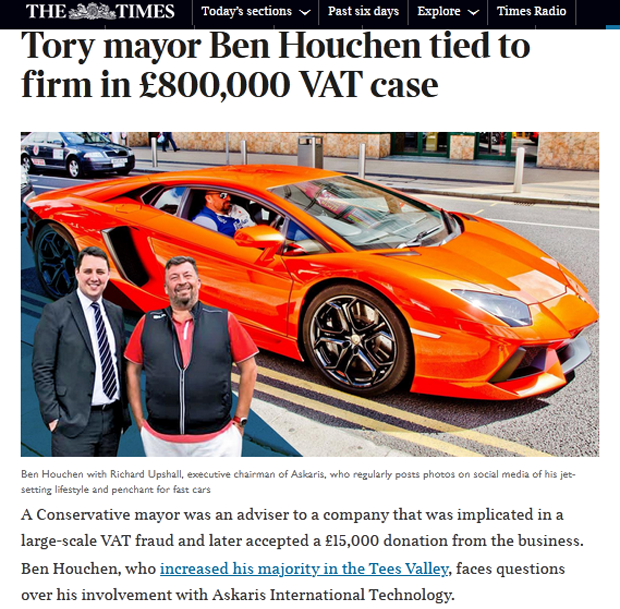 Second lesson: the simple courtesy of a response is often the best policy.

Meanwhile, turning to topics of far greater importance than the aspirations of just another Tory greasy-pole climber, the Enquirer will presently be publishing details of the next WAVE “Reclaim Our Sea” event – a human WAVE spanning the shorelines and riverbanks of the entire UK.

Campaigners are asking supporters to download (HERE) and print out (in black-and-white or colour) the following generic poster in which local details may be added, in marker-pen, for display in local shops and homes in A2, A3, A4 or A5 format. 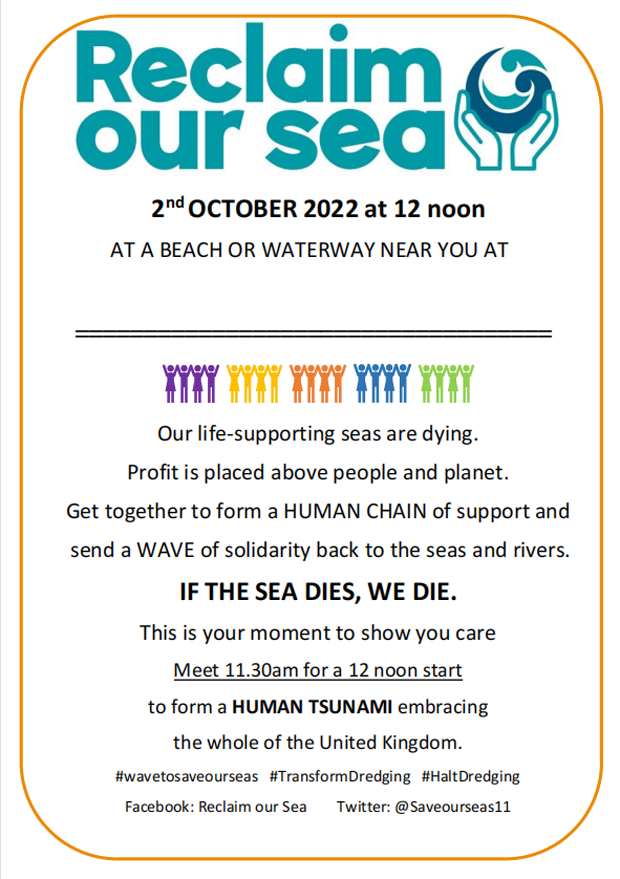