Retired Cottingham developer Mr Peter ROBINSON has published the latest in his continuing series of attempts to have his allegations against ERYC Leader Councillor Stephen PARNABY [Con.] properly addressed.

Without further ado, here follows his letter of 13th June 2017 to ERYC Chief Executive Ms Caroline LACEY, followed by her letter to him of 12th June 2017, to which Mr ROBINSON’s letter responds.

Following these two letters (embedded in the PDF format in which they arrived), is a pertinent comment from a serving ERYC Councillor who clearly supports Peter ROINSON’s interpretation.

For readers’ convenience of reference, the Open Letter to Councillor PARNABY from Councillor Andy STRANGEWAY [Ind.], referred to in Mr ROBINSON’s letter, is reproduced below: 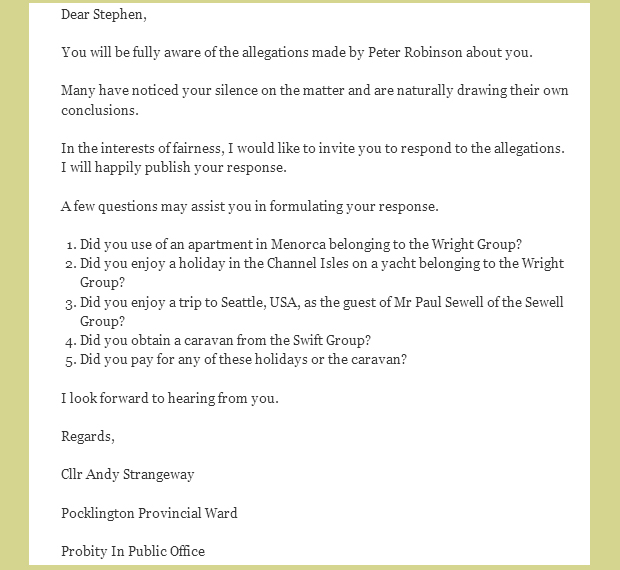 The Localism Act 2011 created a a new criminal offence for failing to declare or register pecuniary interests. The new arrangements reflect the Government’s policy that elected representatives should continue to declare financial interests in an open and transparent way, to avoid conflicts of interest especially on issues such as planning applications or financially benefiting from the issuing of council contracts.

A neat trick: Cllr Parnaby is not a director of the company that provided services to ERYC, but is a director of it’s parent company which has a 75% holding so is listed under the new ‘persons of significant control’ regulations. POSC was created specifically to stop people from hiding like this.  The contract may have ended, but the company still exists, and he is ‘active’ as a director, therefore it needs to be declared.

That, to me, reads like a clear statement of the belief that Councillor PARNABY has committed a criminal offence.

Given that the information, first published on the Enquirer in my article “PARNABY: The Questions Multiply” on 25th April 2017, that Councillor PARNABY is a director of Arvarto Government Services Ltd and, as we have seen, Councillor PARNABY did not declare his interest in Arvarto Government Services Ltd, it is difficult to understand why Ms LACEY has not referred the matter to the Humberside Police.