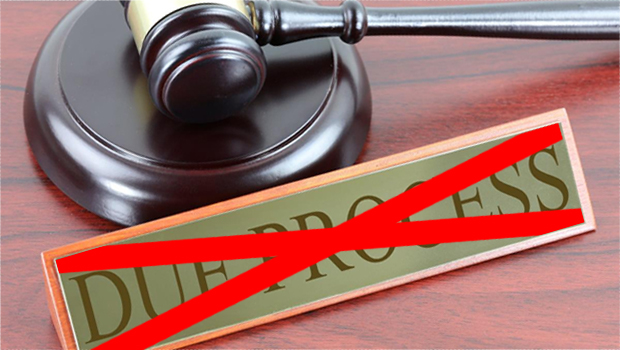 On Thursday 15th August 2019, the Scarborough News published an article about Scarborough Borough Council’s record in dealing with complaints from members of the public. The SN showed that over the past two years, the Local Government Ombudsman (LGO) upheld an average of 63.5% of Complaints against Scarborough Borough Council, stating that ‘similar’ Councils averaged ‘only’ 43%. However, of the 24 Complaints against the Council last year, only five complainants bothered to take their unresolved issues to the LGO – such, one may infer, is the low level of public confidence in the LGO.

Turning now to a case which Enquirer readers have had an opportunity to observe for themselves, readers will recall the appalling threatening ‘red mist’ email sent to me by the Council’s then Data Protection Officer, Mrs Alison JOHNSON, on 26th July 2019, using her official SBC email address. I immediately lodged a Formal Corporate Complaint, reporting on the matter on 29th July, and setting out the grounds for my Formal Corporate Complaint in some detail. (Quaintly, Mrs JOHNSON has since removed her likeness from her Facebook presence).

Scarborough Borough Council has, of course, adopted a Corporate Complaints Procedure. As we have seen above, courtesy of the Scarborough News, it is at best only 2/3rds as good as it should be. This is something which the new CEO will be hoping to improve.

But first, a glance at the ‘road map’ of how, and over what timescale, my own Complaint should have been processed: 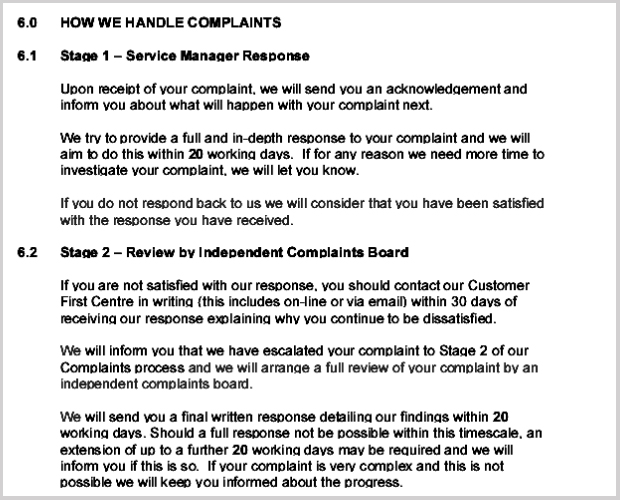 Now let us examine how satisfactorily these 2/3rds competent Officers have processed my Formal Corporate Complaint:

a) SBC did not, “Upon receipt of my complaint”, send an acknowledgement or inform me about what would happen with my complaint next;

b) SBC did not make any attempt to provide “a full and in-depth response” to my Complaint;

c) SBC did not let me know that they needed more time to investigate my Complaint;

d) SBC did not provide confirmation that the data breach, or potential data breach, had been reported to the Information Commissioner’s Office (ICO).

Every step of the Stage 1 process has been flawed.

6.2 Stage 2 – Review by Independent Complaints Board

a) Having responded immediately in writing to the Data Protection Officer’s totally inadequate Decision, SBC has not informed me that my Complaint has been escalated to Stage 2.

b) SBC has not informed me that it will require more than twenty working-days to resolve my Complaint at Stage 2.

In short, one might well ask “Due process? What process?”

SBC has done nothing right. Nothing at all. What is the explanation for this gross incompetence? Innate stupidity – or personal bias against me on the part those whose appalling conduct (and there has been plenty of it) I have had the temerity to criticise; that is a very good question.

But I am getting ahead of myself.

On 16th August 2019, twenty-one days after I lodged my Formal Corporate Complaint, I emailed Mrs Lisa DIXON, who is the Director of Legal & Democratic Services and Monitoring Officer at SBC (i.e. Alison JOHNSON’s ‘boss’), copying in (Bcc:) a number of SBC Councillors at their private email addresses), in the following terms:

Please may I refer you to:

I await a response/acknowledgement to my Formal Corporate Complaint against Mrs JOHNSON regarding her disgraceful conduct. I do not care whether or not Mrs JOHNSON has now left the Council; I am entitled to due process. I also require your confirmation that the matter has been reported to the Information Commissioner’s Office (ICO).

Please see to this, as a matter of urgency.

Your response today, if you please. Thank you.

PS – I repeat my offer to assist you with the unenforceable PSPO and the unlawful CCTV operation. Of course, if you prefer to continue to make an abject fool of yourself, that is a matter for you. If you do not understand why the former is unenforceable and the latter unlawful you obviously need my assistance.

Meanwhile, please instruct your staff to fulfil my Subject Access Request for the CCTV footage, in compliance with the terms of the GDPR, without further prevarication. Thank you.

In my view, the above email is business-like and to the point – but not discourteous, nor unhelpful, and by no means “vexatious”.

Although I am reliably informed that Mrs DIXON opened my email within less than 5 minutes of transmission (what happened to the unlawful filtering system which supposedly reviews my emails only once a month?), she has not responded.

At least, not in her own name.

However, a couple of hours later, I received the following unsigned email from the email address of the Data Protection Officer:

In respect of the alleged Data Breach by Mrs Johnson in respect of use of your email address, I can confirm that the matter has been investigated and it has been confirmed that the email address in question is in the public domain, and therefore no breach has occurred.

In fact, total departure from the Council’s adopted Complaints Procedure. A travesty of due process and a shameless closing-of-ranks to protect a proven wrong-doer.

Once again I am reminded of His Honour Judge Humphrey FORREST when he pronounced the Council’s investigations into the Ben MARRIOTT corruption allegations “a complete whitewash”.

Is it really any wonder that I hold rogue Council Officers in utter contempt? How will CEO Mike GREENE deal with rogue Officers?

But readers may also remember my article of 30th July 2019, in which I disclosed an email from former Leader Councillor Derek BASTIMAN [Con.], condemning Alison JOHNSON’s email to me and calling for “the investigation to be carried out in a timely and effective fashion”. (One wonders, incidentally, whether or not Mrs DIXON has successfully investigated which recipient(s) of Councillor BASTIMAN’s email to her ‘leaked’ it to me – risking prosecution [my ass] for Misconduct in Public Office and a life term at HMP Full Sutton): 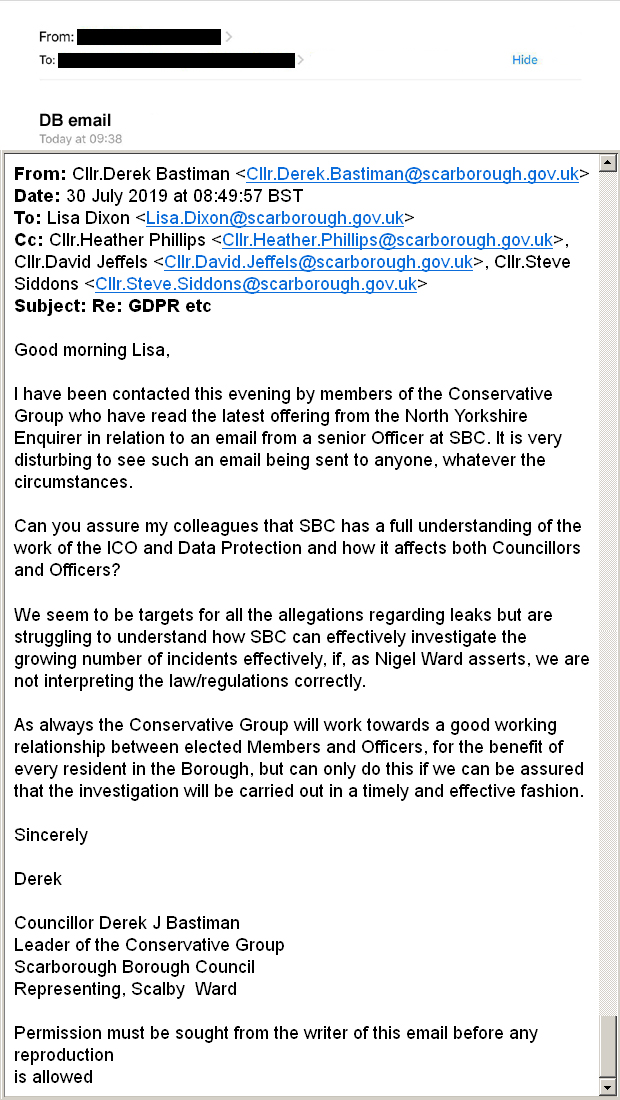 I sincerely hope that Councillor BASTIMAN (who an Independent Councillor described to me only yesterday as “The Once and Future Leader”) will do the right thing and follow this up with the incoming Chief Executive Mr Mike GREENE who has now taken up his post (on 28th August 2019).

To be clear, it is not I who sets the standards; that task fell, in 1994, to Lord NOLAN’s Committee on Standards in Public Life. The Seven Principles have since been reviewed and refined, most recently in 2013. Sadly, they have been almost universally ignored. 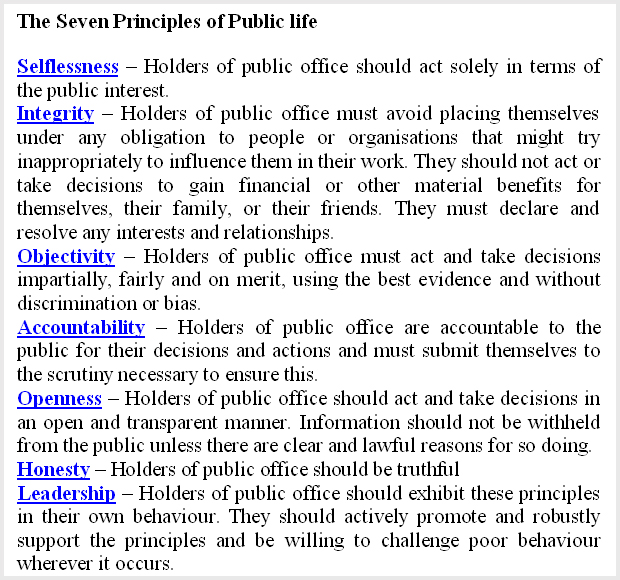 Readers will detect the irony in the fact that is precisely those who campaign for the strict observance of Lord NOLAN’s Principles (i.e. myself, the two Tims and other NYE contributors) who have been refused Freedom of Information and Subject Access Requests, had our email correspondence held under surveillance and been ‘deemed’ “vexatious”. No prizes for guessing why.

As an aside, I will bet a pound to a penny that Derek received no word of support from the Leader of the Council – or response from Mrs DIXON. (You okay with that, Derek? If Steve sent you his support and Lisa responded, I owe you a quid – and if they didn’t, you owe me a penny?).

So long as Mrs DIXON persists in defying the Council’s own protocols and treating me as a second class citizen, I will persist in reporting her many failures. On past form, that may well happen on a fairly frequent basis.

A lot will be up to Mr Mike GREENE and his declared intention to re-establish SBC’s reputation as a well-run Council. If such is his goal, then all this has to stop – the cover-ups, the secrecy, the breaches of procedure. New broom, Mike? Are you tough enough to swing it? 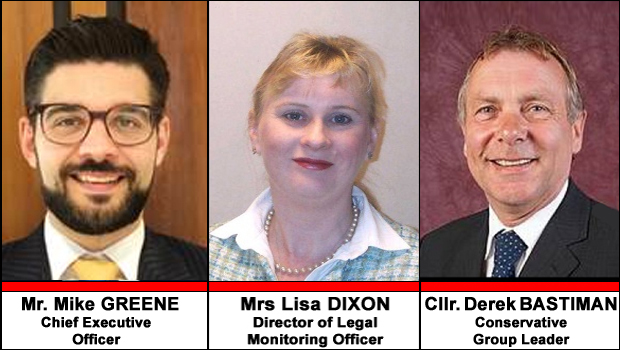