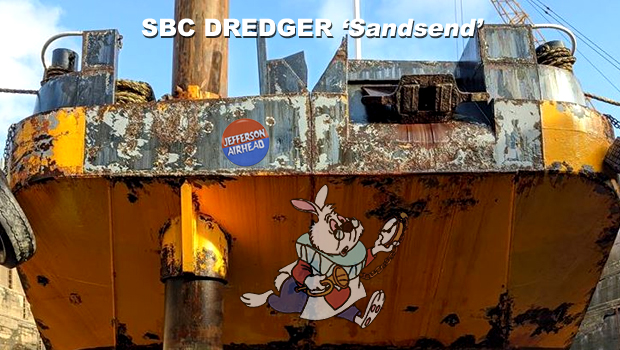 In pursuit of the White Rabbit, Guest Author ALLAN ROBERTS, the Enquirer Harbours Correspondent, has been dredging the depths of credulity in the Wonderland world of SBC.

Readers may well recall the opinion expressed by a number of correspondents here on the Enquirer that Scarborough Borough Council represents a classic example of “the tail wagging the dog” – in other words, that it is the Officers who run the show and the Councillors (all but the very best of them) are putty in the hands of ‘the professionals’.

Readers will perhaps recall a recent article by ALLAN ROBERTS (26th November 2019) on the subject of the financial viability of the Council’s approach to fulfilling its dredging duties within the Borough Dredger, ‘Sandsend’.

Relying entirely on the Council’s own figures, ALLAN demonstrated massive disparities between dredging costs and charges at each of the Borough’s two harbours – Scarborough and Whitby. He also addressed the content of his article directly to Councillor Janet JEFFERSON [Ind.], Portfolio Holder for Finance & Operations (which includes the harbours) seeking an explanation for the discrepancies – and the apparent waste of public money.

Further to your email and my acknowledgement dated 25th November, I have now had the opportunity to discuss the dredger finances with officers, and I would address your questions as below.

For your information I am aware that the dredging system is currently the subject of a forthcoming Cabinet Report which depending upon the outcome may lead to a tendering process.

Allan ROBERTS (with double–l, Janet) has since responded to Councillor JEFFERSON:

Thank you for your reply; however I believe that you, or your Officers, are pulling the wool over my eyes.

You quote that the dredger budget is set on the assumption that 10,000 tonnes of spoil per year will be removed from Scarborough Harbour at £3.80 per tonne.

On what you have been told, that would indicate a very reasonable rate – until you take into account that the 10,000 tonnes quoted have never been achieved in either of two years that I brought to your attention.

In both of those years, the charge against Scarborough Harbour was £38,000 per year.

To charge for any service on what it could provide, rather than what it actually does provide is, in my view, nonsensical and unprofessional.

I doubt that SBC would offer any outside dredging contractor an arrangement whereby they are promised a significant payment for an unspecified amount of dredging. Yet that is exactly what is enforced upon Scarborough Harbour.

You told me, “As Cabinet Member, I will endeavour in the near future to provide answers to your four main questions within the final paragraph”.

May I remind you that, you have neglected to provide me with a reply to question #3:

‘Is Scarborough Harbour getting value for money from the Borough Dredger?’.

Not only has the tail been wagging the dog – it has even set the dog barking on its behalf.

Which raises another question:

Will Councillor Janet JEFFERSON [Ind.], Portfolio Holder for Finance & Operations, be brave enough to go back to her Officers, or merely accept what is clearly a cop-out, a face-saver, a dishonest excuse?

Only time will tell.