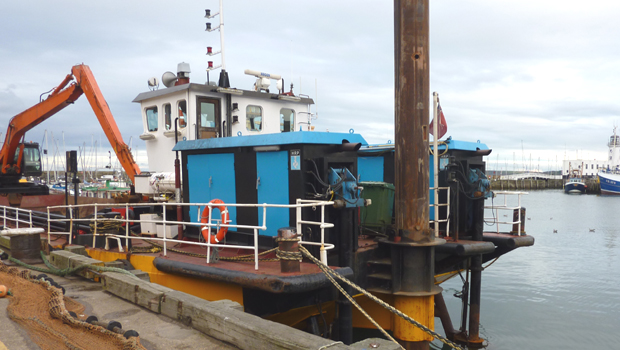 17th of August 2017 saw the welcome return of the Scarborough Borough Council owned dredger “Sandsend”  back to Scarborough Harbour to undertake essential dredging in the port, in particular at the entrance to the harbour which the Council Leader Derek Bastiman claims has 24-hour access, 365 days a year.

17th of August 2017 was a Thursday and upon arrival from its epic voyage from Whitby, the dredger took up its position alongside North Wharf for the weekend.

Sandsend (bought in 2003 at a cost of £750,000) has recently undertaken a further £400,000 re-fit to eliminate the need for the jack-up platform on which was based the digging element of the dredging operation. The digger is now in place on the hopper barge, thus making the dredger a stand alone operational unit. It is also understood that an overhaul of the propulsion system was possibly undertaken.

Upon commencing operations, on Monday 21st August, following dumping of the initial load and manoeuvring in the harbour, the dredger suffered a breakdown losing its power which resulted in a collision with vessels moored at the inner harbour pontoons, causing some significant damage – damage rumoured to run well in excess of £100,000, or even a write-off – plus significant inconvenience to the vessel’s owner, to say the least.

The dredger has since remained unused alongside Scarborough’s  North Wharf since Monday the 21st August 2017, making it now 3 weeks since it arrived in the port, with devastating consequences for at least one owner, who expected his vessel to be safely moored within the port confines.

Looking on the bright side, it is apparent that the lack of dredging activity has at least provided a peaceful nesting site for a pigeon, who has taken up residence aboard and is now sitting on a clutch of eggs! 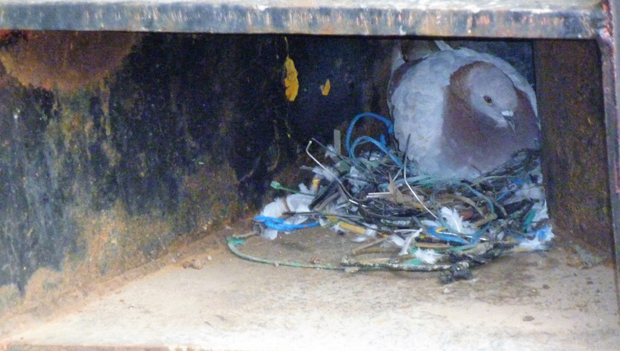 It has to be asked if the continued ownership of the dredger, with its limited operational use over the past years, represents value for money for the customer – Scarborough and Whitby harbour users. It’s the harbour users  who pay for what is perceived by many as another vanity project which, in reality, is obviously more of a liability, taking into account cost versus risk versus benefit of this ‘asset’.

Bridlington, only 20nm distant, has a brand new purpose-built dredger, owned by the ports Commissioners. Bridlington Harbour Board have, in the past, maintained a charter party agreement and apparently would be willing to discuss providing dredging maintaince to the Borough’s ports – probably a much more cost-effective solution than the one currently in place.

Councillor Cockerill is no stranger to our neighbours to the south and is well known for his contribution during his time on the Board at Bridlington.

He perhaps should be encouraged to explore the option.

Of course, the dredger is no stranger to conflict having damaged and sunk vessels in Whitby, along with the compensation paid out to Whitby residents for undermining their foundations following the collapse of the harbour wall behind Sandgate in Whitby. 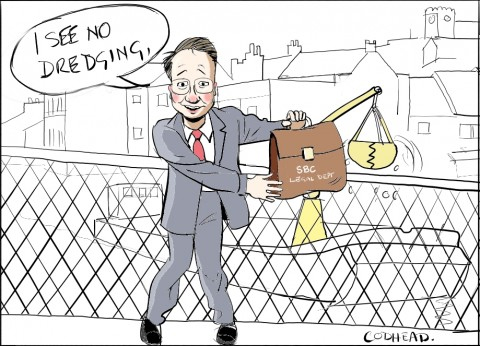 Compensation is thought to have run to in excess of £1 million pounds.

Then we have the notorious suction pump, purchased for £56,000 and sold on eBay shortly afterwards for £12,921.

Could it be, that the leadership on this particular aspect of harbour operations is lacking in reality, resulting in the customers – harbour users – not getting the service they expect?

Should the continued ownership and operation of the dredger be referred to the Overview & Scrutiny Board to ascertain whether or not the dredger represents extremely poor value for money for its continued use by SBC?