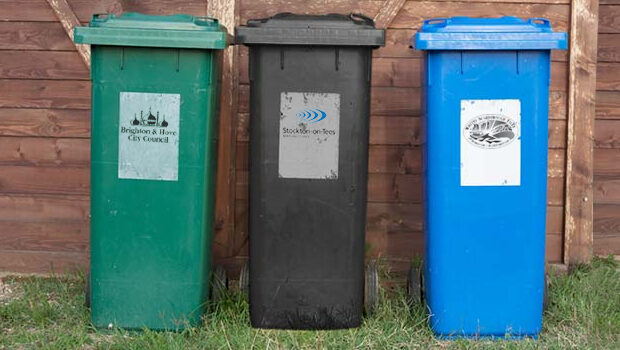 The revelation that Richard (the Brighton Bin Man) Bradley, who holds the post of Commercial Director at Scarborough Council, (nearly £80 grand a year plus perks) a position which allows him to borrow £30 Million on his own authority, has no qualifications in commercial property management, whatsoever, will, I am sure, come as very little surprise to most of the Borough’s residents.

Indeed, Scarborough Council has a strong track record of employing unqualified officers to fill highly paid posts. It might be remembered by some that not so long ago the Council took on a Director of Tourism who had no real tourism qualifications at all. The letters after his name, and the trade organisations he claimed he was associated with, all turned out to be fake.

So I suppose none of us was really surprised when the Bin Man, with no qualifications in property acquisitions, bought the clapped out St Nicholas Hotel for £14 million, when it was not even worth half of the purchase price. Nor, I suppose, in view of his total lack of understanding of the commercial property market were we surprised that he thought that renting the knackered hulk to Travelodge, a hotel chain with huge financial problems, would be a rip-roaring success. The fact that Travelodge nearly went bankrupt in 2012 and still had huge debts when he did the deal with them seems to have passed the Bin Man by.

The Travelodge deal has, in fact, as most sensible people thought it would, now turned into a total disaster and my guess is that rate payers will be saddled with paying off the £14 million debt for many years to come. However, we can do little, if anything, about it now. The Bin Man has done his business and the Borough’s Council Tax payers will have to pick up the bill.

The same, however, cannot be said about the Bin Mans latest financial brain storm. It may be recalled that on the Bin Mans recommendation the Council is embarking on the ARGOS project; costing £22 million this time. Under the terms of this deal, the Council will buy the ARGOS building, demolish it, and then bring in a Scottish property developer, Buccleuch Property (Scarborough) Limited, who will build Coventry University a block of student flats.

The deal, as with the St Nicholas Hotel/Travelodge deal, is completely risk free for the developer and Coventry University, they are contributing absolutely nothing (they might pay the Council a bit of rent but I would not hold your breath). All the £22 million debt, should the deal go fits up, as it surely will, will be repaid by the Borough’s hard pressed rate payers.

The whole concept of the ARGOS deal, even without the presence of Coronavirus, is, in fact, total madness and many residents have commented that whoever thought this deal up must either be on the take or completely incompetent, I, of course, could not possibly comment, but feel free to give me your opinions.

Indeed, in regard to the total madness of the ARGOS deal it is interesting to note that one (or more) prominent local business person has already instructed a heavyweight solicitor to challenge the financial soundness of the Travelodge deal. It is clear, to me at least, that grounds for concern must be of a very high order when, with solicitors insisting on being paid up-front, a private individual is driven to take legal action against this ludicrous deal.

However, Bin Man Bradley says, as he did with the Travelodge deal, that the ARGOS deal he has done for us will be brilliant. The University will pay its rent. The University management will stick with us for the long haul. Scarborough’s rate payers have nothing to worry about. This time it will all be different, the Borough will make a fortune.

Well will things be different this time? Will the university management stick with us through thick and thin? Will they find the students to fill the accommodation we are building for them? Will they pay their rent and are Coventry as fully committed to Scarborough as the Bin Man would have us believe?

COMMITMENT?: As we all know nothing is going to be like it was only 12 months ago and nowhere is this observation more relevant than in the field of university education. The way in which universities deliver learning to their students was already changing before Covid, distance learning and online learning being increasingly utilised, and the outbreak of the virus has obviously accelerated this trend.

Students, because of the cost initially, and now in reaction to Covid were already opting in large numbers for stay at home degrees and CU are at the forefront of providing the new form of learning. Kerrie Kennedy, writing for THE PIE NEWS observed that: “From September 2020, approximately 40,000 students from courses across the Coventry University Group will be using Aula (Coventry University’s online learning platform) – a move which makes Coventry the first university of its kind, globally, to commit to the next era of digital learning”. CU has long since recognised that students no longer need to physically attend campuses to get their degrees and is actively using online learning to meet their needs.

HOWEVER, THE BIN MAN DID NOT PUT THIS INFORMATION INTO HIS REPORT TO MEMBERS.

THE LONG RUN?: CU has also recognised that many students from abroad, the most financially lucrative students, will in future opt for alternatives to UK based learning institutions. CU are, as we speak, opening a new university complex in Poland to facilitate the needs of EU students. CU are also building, at a cost of £14 Million, a new university complex in Morocco to facilitate the needs of African students. These facilities in Europe and Africa will almost certainly be followed, as other universities have already done, by facilities in the most lucrative markets China and the wider Asian continent.

HOWEVER, THE BIN MAN DID NOT PUT THIS INFORMATION INTO HIS REPORT TO MEMBERS.

WILL CU PAY THEIR RENT?: It has been widely reported that the financial prospects for British universities are not looking good. A report in July predicted that more than a dozen British universities could be bankrupted by the Covid-19 pandemic. “The Institute for Fiscal Studies (IFS) said it was a “very real prospect” that institutions could go under. The think-tank has analysed the financial impact of coronavirus on the higher education sector and researchers say that the total losses affecting the U.K.’s university sector, in the long term, could be anywhere between £3 billion and £19 billion.

HOWEVER, THE BIN MAN DID NOT PUT THIS INFORMATION INTO HIS REPORT TO MEMBERS:

Experts in university education, not waste management, are saying loud and clear that the future for British University institutions is at best uncertain and could, at worst, be very bleak indeed. So what are the Clown Hall and their property whiz kid Bin Man Bradley proposing to do? borrow £22 Million and build a block of student accommodation for Coventry University.

As I see it Coventry University, and Bin Man Bradley, are taking the rate payers of Scarborough on a £22 Million pound ride and the current, incompetent, Labour leadership are providing them with a Rolls Royce to carry away the loot.

However, there is hope that their sneaky ARGOS plans may yet be scuppered. It is already rumoured that Bin Man Bradley is looking for an exit strategy; perhaps taking a job with a certain Scottish development company. As for the pathetic Labour controlled executive which currently rules over us, its days must surely be numbered.

The Leader and his administration already loiters on a knife edge and will surely fall into the political abyss when voters are once again allowed to have their say on its lamentable performance.