What About Boosbeck, George Dunning? 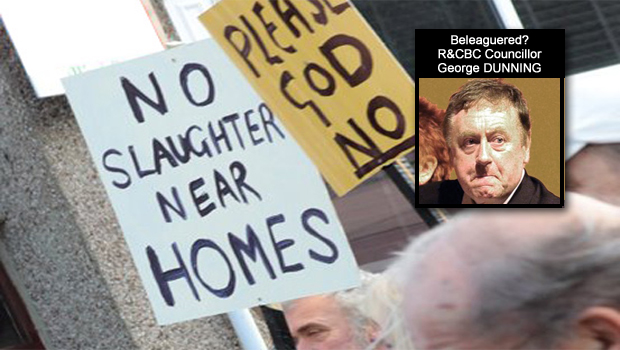 A Letter to the Editor from Neville BROWN, a resident of the village of Boosbeck in the Borough of Redcar & Cleveland, seeking an explanation as to why the Council has disregarded the advice of its own Legal Officer Gerard TOMPKINSON by referring a necessary Planning decision to Cabinet, in direct contravention of the Council’s own Constitution. Is the Council playing for time – fearful of grasping a very expensive nettle arising from its own past failings?

I live in a small village, Boosbeck, in the Borough of Redcar & Cleveland. We have a LABOUR Council that has been hell-bent on putting money before people’s lives for the past two and a half years.

As I am sure you are aware, there is a controversial abattoir in the middle of the village that has had no Environmental Impact Assessment, and is operating without restriction. This means that this abattoir can legally operate 23 hours a day, 7 days a week. This abattoir has the capacity to slaughter around 8,000 sheep per week. Residents have witnessed terrible things such as sheep’s carcasses after their slaughter, their severed heads rolling about the yard, with families living only a few metres away from the abattoir.

Other nuisances, such as constant fans buzzing throughout the night, a horrendous smell from uncovered trailers filled with dead sheep innards and guts, have made our lives misery.

You may think “Why has something not been done about this yet?”.

The residents have been complaining to a local Councillor David Williams for the past 18 months.

However, recently – and very mysteriously – Councillor Williams’ emails (hundreds of them) relating to the Boosbeck abattoir have gone missing.

Why? Because the Council – and especially their leader, GEORGE DUNNING – are afraid of a compensation claim that the owner of the abattoir is entitled to if they were to shut him down after wrongly allowing him to open the abattoir in the first place.

Throughout, the Council has been more concerned about the cost of paying compensation to this business without considering residents’ rights to compensation. This is a clear infraction of our Human Rights.

A Section 102 of the Town and Country Planning Act (Notice of discontinuance) was put to the Council by Councillor Williams several months ago, now.

They have gone against their own Constitution, which clearly states that planning issues are to be dealt with by the Planning Committee and no other body. So, as we know just how bent this Council is, they send the meeting to Cabinet (an ILLEGAL move) to deal with the matter.

Members of the Council, including George Dunning himself, have expressed that they are strongly empathetic to the people of Boosbeck for having to put up with such a monstrosity in the middle of their village. But we shall see where their allegiances lie on the 16th September when the fate of the abattoir, and more importantly, hundreds of people’s lives and the amenity of the village, is decided.

The Council seems to think that they can hide behind a court case which surrounded this situation over the issuing of a Lawful Development Certificate. As the judge said, “the Council had to grant the LDC” because it had planning permission – not whether that permission was granted lawfully or not. Which we now know, it was obviously not.

We did not want this to become a political war. But it has become inevitable with the size of the fight between villagers and this corrupt Council. I myself have spoken to hundreds of people personally who have now said they will never vote Labour again after the way this Council has treated the people of Boosbeck. We are extremely disappointed with their lack of accountability and transparency in this horrendous situation.

Other political groups have been in touch with the residents of Boosbeck and have been extremely helpful in this matter. We as a village appreciate the help given to us by these other parties.

Could anyone please advise us on what the Labour group are intending to do about this?