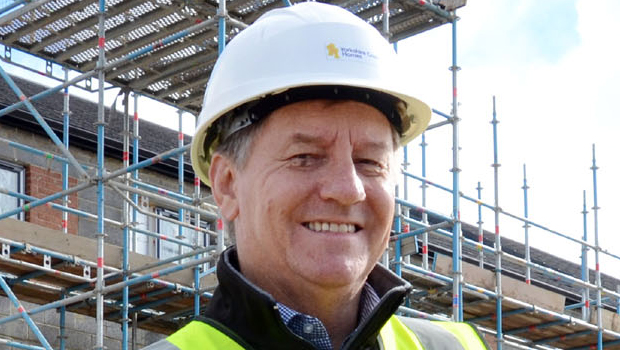 Yorkshire Coast Homes Ltd (YCH) is the pre-eminent social housing provider in the Borough of Scarborough, providing around 4,500 homes. As such, it has a significant presence in deprived areas, including the east side of Whitby. Its housing stock was transferred from Scarborough Borough Council in 2003, upon which a full improvement programme was initiated to bring the homes up to the Government’s Decent Homes Standard (DHS), which may be reviewed here. The specifications set out are many and stringent. In the broadest brush-strokes, they include:

Tenants tell me that the vaunted “full improvement programme” has amounted to very little.

The Operations Manager of YCH is a Mr Bill MILLER (not to be confused with the Newby & Scalby Parish Councillor of the same name). Fourteen years after YCH’s commitment to the Government’s Decent Homes Standard, I had occasion to write to him last weekend on the subject of a particularly disturbing interaction between YCH and a Whitby tenant (who I shall call Maureen), regarding unacceptable shortcomings in the standard of her YCH home. I might add that this is merely the latest of many reports in a similar vein – “the straw that broke the camel’s back”.

Despite being informed, when first applying for a YCH home, that the rules in relation to Safeguarding required her to use the so-called ‘bidding procedure’ only in respect of three-bedroom properties (one for Maureen, one for the teenage boy and one for the two younger children), Maureen was offered and encouraged to accept (and, in the end, did accept) a two-bedroom home in a relatively convenient location for the children’s schooling and family visits.

I will not bore the reader with a comprehensive list of problems that have since arisen. These have persisted for two years, during which time Maureen has been beside herself with worry and a deepening sense of frustration, impotence and despair because no amount of requesting has brought about any tangible improvement in a situation which is, frankly, intolerable.

On one occasion, the house mysteriously filled with smoke in the middle of the night. North Yorkshire Fire & Rescue came out but failed to identify the problem and referred Maureen to YCH.

At her wit’s end with worry and anxiety, Maureen’s mental health rapidly (and quite understandably) deteriorated. But even a letter from her GP gained no traction. Bringing up three kids alone is no picnic at the best of times. In the prevailing circumstances, Maureen felt at the end of her tether. Finally, her depression cost her her job. That is another issue.

Setting aside the Safeguarding issue set out above, I was shocked when, at Maureen’s invitation, I visited her home on Saturday last.

At the present time, and being mindful of the information originally provided by YCH regarding the bedroom arrangements for her three mixed-gender children, Maureen has placed her elder son (15) in the back bedroom and the two younger kids (girl 7, boy 4) in the front bedroom. Both bedrooms are damp. Maureen herself sleeps on the sofa in the living room.

The first floor of Maureen’s home comprises two bedrooms and a bathroom. In the front bedroom, a collapsed section of plaster-board leaves bare wiring to a light-switch exposed. When I asked about it, Maureen told me that the YCH operative sent to repair the fault announced, on inspection, that since it was clearly a two-man job, a requisition would need to be raised and someone would be back in 28 days. “In the meantime, don’t let the kids poke there fingers in their, will you?”.

How does that sit with YCH‘s Duty of Care?

As a result of pointing/flashing and/or brickwork failures above the first-floor windows, all three first-floor rooms had been invaded by rain water, to the extent that the electrics between floors have been so badly affected as to necessitate the YCH operative turning off the lighting-ring for the ground floor, which comprises a kitchen and a living-room. The YCH operative told Maureen that the inconvenience was regrettable but, for Health & Safety reasons, there was no alternative. 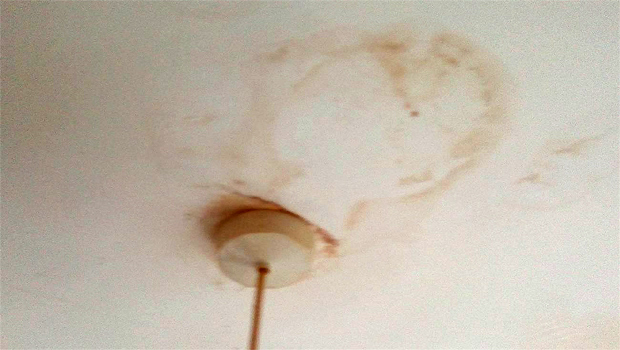 Finding it really quite difficult to cope with cooking, washing and ironing for herself and the family in a kitchen and living-room with no lighting whatsoever, Maureen pressed YCH for urgent, necessary and long overdue repairs. In the meantime, her mum gave her a battery-powered kiddie’s lamp – safer than candles. 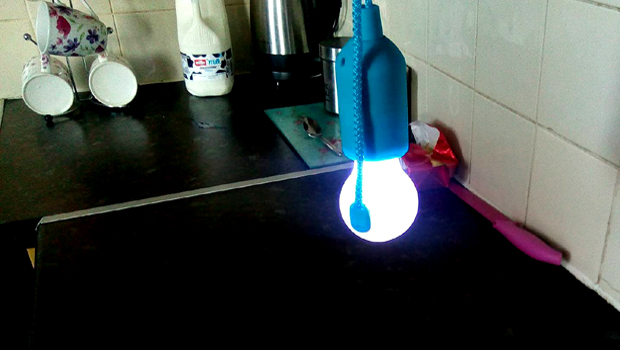 Readers will note the limitations.

So Maureen asked YCH to do something about restoring the use of the ground-floor lighting-ring.

I was in was in sheer disbelief when Maureen showed me YCH’s gesture of emergency relief, brought to her by a YCH operative, who asked, “Will you be alright with that for a bit, luv?”.

A torch, for heaven’s sake – but no spare batteries. A fifteen quid cop-out. And the clocks went back last night.

Courtesy of the compassion and creativity of Bill MILLER’s trusty foot soldiers, Maureen will be able to help the kids carving pumpkin by torchlight this weekend. How ‘atmospheric’.

At least the heating works. On and off. The gas-fire in the living-room does not work at all.

I am hard pressed to recall an occasion when a corporate landlord has evinced such crass insensitivity – nothing short of a contemptuous insult to Maureen and her family.

In the midst of this saga of negligence, incompetence and derision, Councillor Rob BARNETT [Lab.] (Whitby Streonshalh) has accompanied Maureen to the YCH offices at the Coliseum in Whitby. He tells me that he respectfully made the point that the state of the property made it effectively uninhabitable, by any reasonable 21st-century standards, and that Maureen needed to be re-housed with immediate effect. Given the Safeguarding guidance, a three-bedroom property would be the proper solution.

The response entailed a lengthy and convoluted description of the YCH bidding system and the fact that there are soon to be 5 (five) new 3-bedroom homes available in Maureen’s neighbourhood. In point of fact, a visit to the YCH website indicates that there will be 16 (sixteen) 3-bedroom houses.

In the circumstances, one would hope that Maureen and her family might obtain a little relief from their lengthy ordeal. At the same time, I would suggest that YCH now has an extraordinary opportunity here to pick up some much-needed positive press.

I have commented before about what I call the CITI-bank: Compassion, Integrity, Talent and Intelligence.

It is beginning to appear as though YCH is flat broke on all four accounts.

So on 21st October 2017, I emailed YCH Operations Manager Bill MILLER (pictured above, top) requesting an appointment in the coming week (the week now just gone) for Councillor Rob BARNETT and I to meet with him, at his convenience, in Scarborough or in Whitby. I wanted to present the case for a caring, compassionate intervention for Maureen – inevitably linked to some very positive coverage for YCH. (I know; I am too generous). I was giving him the chance to establish some credit in his CITI-bank.

This is his read-receipt:

“Your message . . . was deleted without being read”, eh? I guess Bill decided he did not want to know anything about anything that I might have to say to him; I am not even a tenant of YCH. That was shortly after noon on Monday 23rd October.

This revision of the Regulatory Judgement downgrades YCH governance under the Chairship of Mrs Ros FOX (wife of long-time Scarborough Borough Council Leader and former Mayor, Councillor Tom FOX [Con.], who proposed her for the job).

It just happens to coincides with a letter to all YCH tenants advising of forthcoming consultations concerning a proposed merger between YCH and Coast & Country Housing Ltd (CCH). 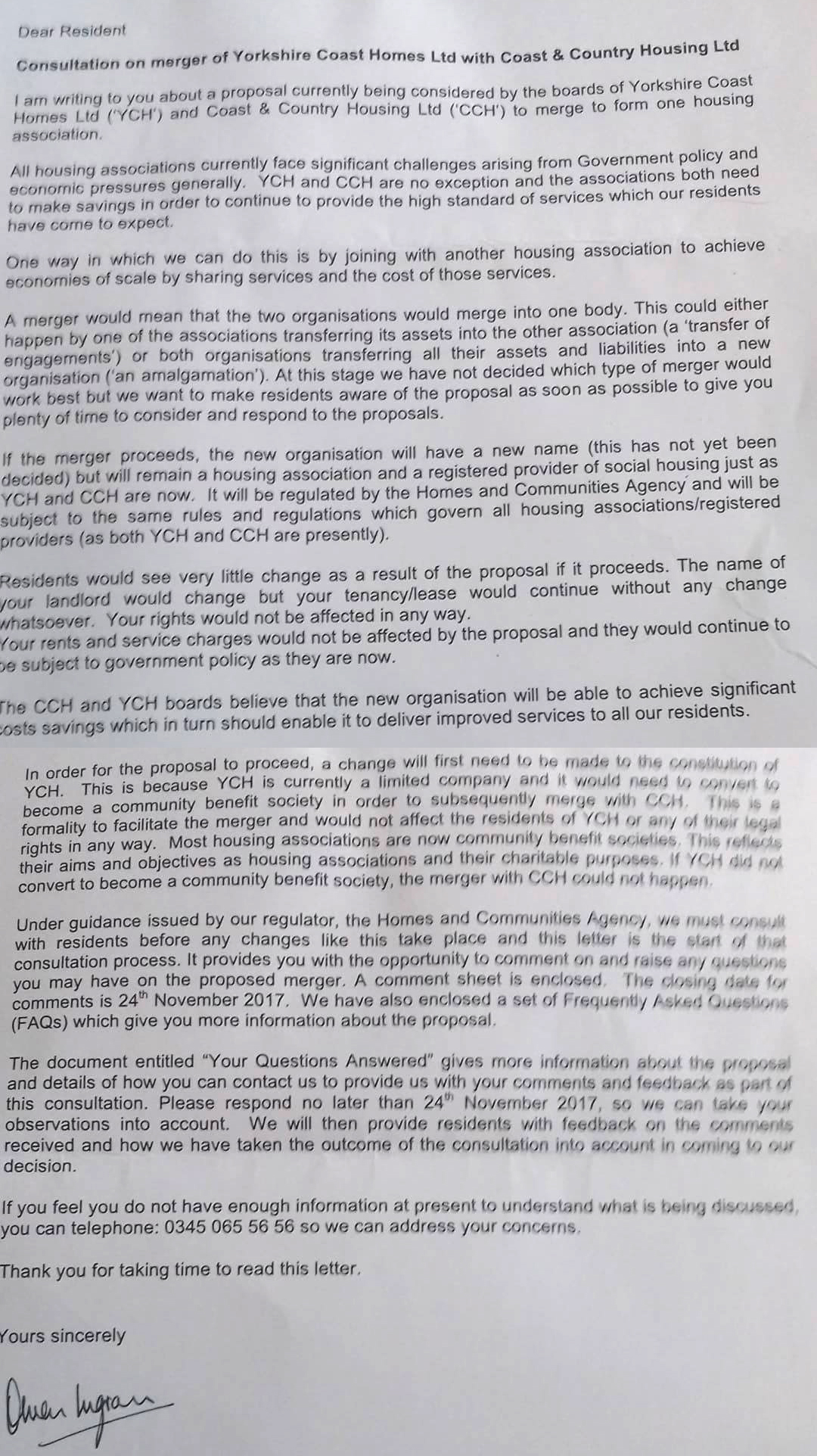 One wonders whether or not YCH has been able to keep its own house in order, never mind Maureen’s . . .

And all this on the back of the unanticipated and reputedly murky departure of YCH Chief Exec Shaun TYMON earlier in the year – in fact, very shortly after being voted “CEO of the Year 2016”, when he stated:

“Fairness is just so important. I regard it as central to everything that Yorkshire Coast Homes does so getting the CEO of the Year award from the National Centre for Diversity is worth more to me than a clutch of industry type awards”.

Curiously, the report on the departure of Shaun TYMON has mysteriously vanished from the Scarborough News website, though I did manage to find a copy on PressReader.com. 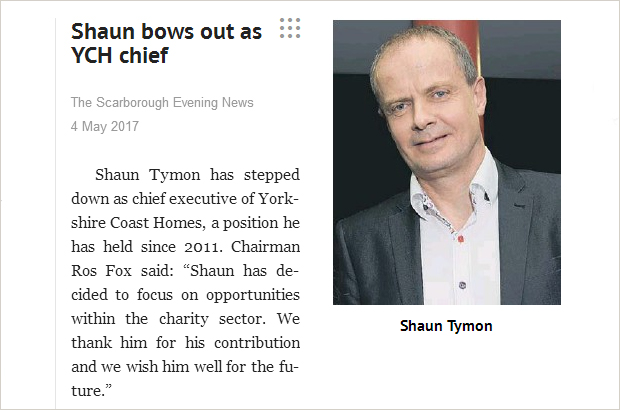 Apropos those sixteen 3-bedroom homes in Whitby; Scarborough Borough Councillor Bill CHATT [Ind.], Cabinet Portfolio Holder for Public Health & Housing and a former YCH Board Member, was happy to comment on the announcement of 105 new homes for Whitby:

“I’m very pleased with this outcome. There is a huge need for more social housing in Whitby, where large numbers of people are on waiting lists, just hoping for the chance of a home. I’m particularly pleased that together with YCH we will be establishing a local letting policy for the first property lets, ensuring that Whitby people will have the first choice.” 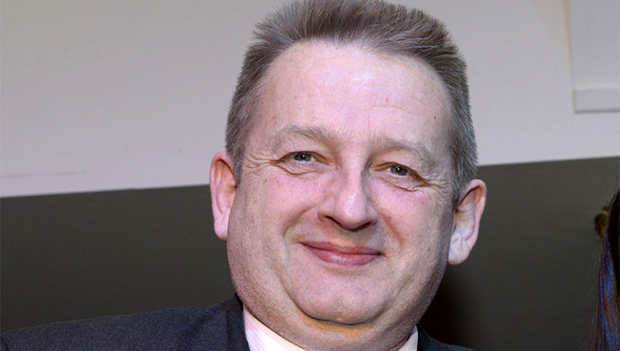 Bill CHATT (pictured) subsequently left the Board, but his boundless enthusiasm has recently been rewarded by a return to the fold; on 27th September 2017, SBC Leader Councillor Derek BASTIMAN [Con.] appointed Bill CHATT back onto the YCH Board: 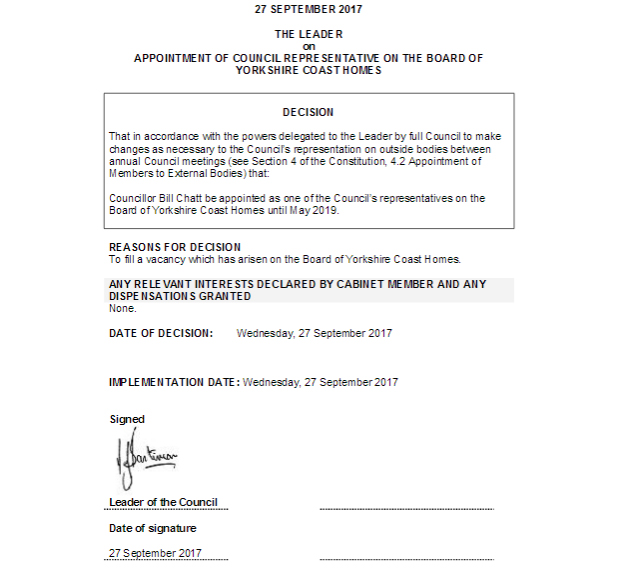 Bill CHATT has turned his hog out with me (story to follow), so I tried emailing YCH Operations Manager Bill MILLER again on Thursday. I am informed that he opened my email but he has not troubled to respond.

Councillor Rob BARNETT and I have made clear to Maureen that taking her story to the press might very well jeopardise her prospects of being re-housed by YCH in an acceptable dwelling, ever. She replied;

“I really don’t care about that any more. There’s dozens of people who’ve been treated as bad us. Worse. It’s about time somebody put the record straight. If it has to be me, it has to be me. They won’t re-house us anyway. I mean, a bloody torch, for god’s sake! How low is that?” 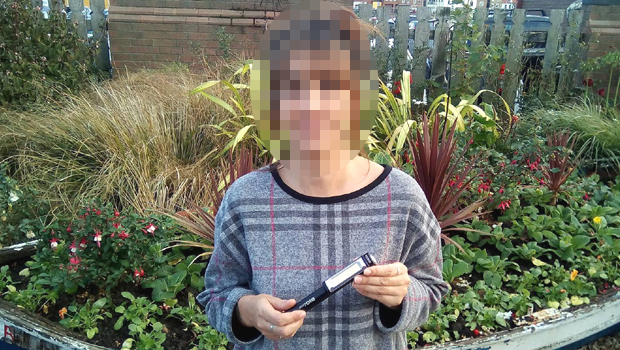 Councillor Rob BARNETT [Lab.] reviewed this article prior to publication and confirms the factual accuracy of my report.

Maureen has granted her consent to this article being forwarded to the national press, including her true identity, her unpixellated image and her personal contact details. Hopefully, this will not be appropriate. I look forward to submitting for publication Bill MILLER’s Press Statement announcing his timely and compassionate intervention. Christmas comes but once a year; the Enquirer publishes more frequently.

Oh, and before you go, you may wish to revisit NYE editor TIM THORNES’s article from from 7th November 2014:

It does not make happy reading for the ‘Maureens‘ amongst YCH’s tenant roster.