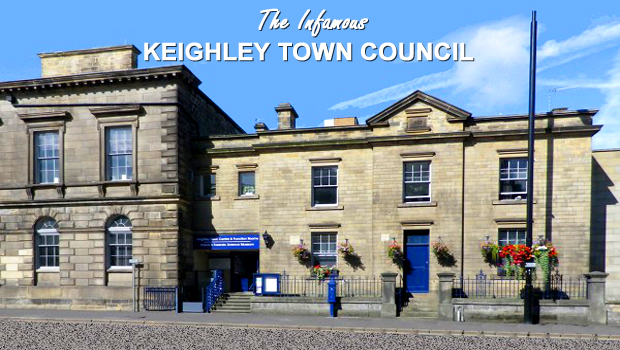 The North Yorks Enquirer has been attracting readers from far and wide; many of them are (and have been) investigating the activities of local Councils in their own areas.

I present this report by Graham FORSYTH to illustrate my belief that many Parish (and Town) Councils, like Exelby Leeming & Newton in Hambleton and Whitby in the Borough of Scarborough, are in the hands of delusional egotists, utter scoundrels, criminals and fools.

I hope readers will be encouraged by Graham’s work to contact us with their own experiences. The time for a thoroughgoing reform of local government is long past. Change is needed now.

“Bringing it all together and achieving that has to be a creditable performance for a town council. Thanks to the way it is funded it is already financially self-sufficient – a win-win situation for everyone.”

Something must have changed very quickly in the Civic Centre finances. 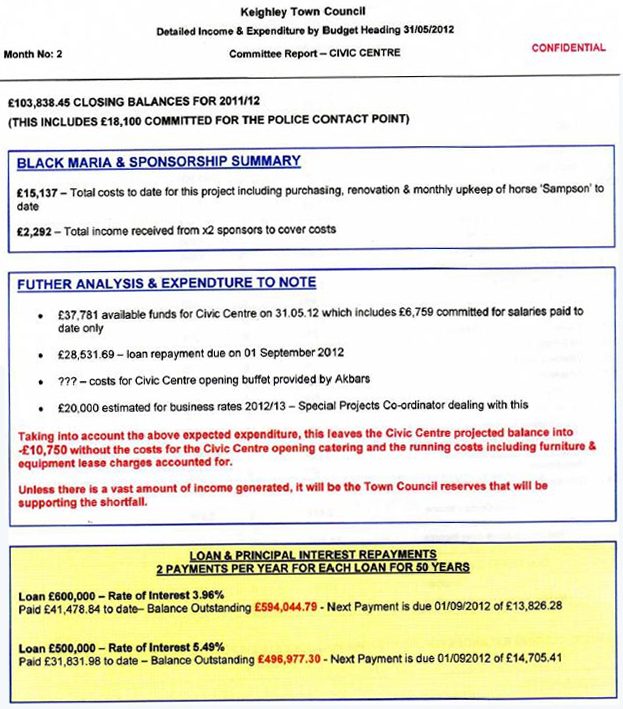 While looking into the option of forming a Riddlesden Parish Council, in co-operation with a Keighley Town Councillor, Ron Beale came across two Keighley Council documents marked CONFIDENTIAL, covering the months May and June 2012, and relating to the Council’s Civic Centre. Both documents contained the following warning in red.

At the start of the Council’s Civic Centre project, Cllr Ron Beale was one of a few Councillors who voted against the idea, as it included the Council borrowing £1.1million, to be paid back over fifty years with interest at £50, 452 for financial year 2013/14.

From what little information I had, it worked out the Civic Centre was losing money. Brought to the attention of another Councillor, the late Brian Hudson, who on seeing the documents also became concerned. It was decided in the public interest for Cllr Hudson to inform the Keighley News, who ran an article, Thursday 26th July 2012, titled: “Civic centre ‘in money losses'”.

The report went on to say:

“When the KN began investigating, KTC special projects co-ordinator, Alan Parry, said that the town council had taken legal advice and would pursue legal action against the KN and others if material from the two “confidential” town council documents was published.”

“Mr Parry said Mr Forsyth’s figures were wrong and based on out-of-date, incomplete information. He said Mr Forsyth had not seen details contained in other documents which show how new sources of income will cover the expenditure.” (Emphasis my own)

On 31st July 2012, an FOI request was sent to the then Town Clerk, Miggy Bailey, asking for details of these new sources of income. A reply came on the 20th August 2012 confirmed there were NONE.

“The Civic Centre finances have not been in a loss situation and to date are still in the black.

It is anticipated that the annual minimum expected income will be £219,000. The committed expected expenses per year for the civic centre will be £216,000.

These figures do not include any profit share and are based on worst case scenario figures.”

The 1st November 2012, Minutes from that Council meeting read:

“Councillor Philip explained that the Civic Centre is currently being subsidised by the Town Council’s Contingency Funds and funding has been loaned to the Social Enterprise Company, both as a temporary measure.”

The Social Enterprise Board was set up to run the Police Museum. It failed to register as a company as it was required to do under the Localism Act.

4.Limits on doing things for commercial purpose in exercise of general power

(2) Where, in exercise of the general power, a local authority does things for a commercial purpose, the authority must do them through a company.

On 8th February 2013 the Keighley News reported, in an article entitled “Keighley precept to soar by 72.6 per cent”:

“They said they were proposing the budget as a reluctant response to Government policies and the need to fund Keighley Civic Centre, which is reportedly £74,000 in the red.”

Ron Beale and I struggled with the accounts, which he had managed to acquire. Related to a different issue regarding the Civic Centre, we came into contact with Mrs Elizabeth Mitchell who has accounting skills.

Questions needed to be answered. FOI requests were sent to Keighley Town Council, who dealt with some and ignored others, until reported to the Information Commissioner’s Office, and at one point the Council approached Keighley Police claiming the requests were “vexatious”.

When Eric Pickles, Communities & Local Government Secretary, asked for Councils to open their doors to filming and recording, we took this up, as Council Minutes do not include all that transpires at meetings.

At our first attempt to film, Keighley Town Council asked us to stop filming; we refused. The Council called the Police, who escorted us out of the building. On 4th July 2013, the Keighley News reported this, in an article entitled “Police called to remove members of the public from Keighley Town Council meeting”.

On 7th July 2013, I wrote to West Yorkshire’s Police & Crimes Commissioner, Mark Burns-Williams, which brought about an investigation into this affair.

“At approximately 7pm on the 4th July 2013, a telephone call was placed to the Keighley Police Neighbourhood Policing Team office. The reporting person informed the Police Officer that there was a disturbance at Keighley Town Hall. The officer was informed that 10 people in the public gallery had threatened Councillors and the caretaker when they had been told not to film proceedings and had been asked to leave.” [Ibid]

“I have viewed your camera footage today and there is no evidence of the disturbance that was reported to the Police. It is only fair to mention that the footage was brief and did not show uninterrupted footage from your arrival to your departure.”

Our video-footage of this meeting shows the then Deputy Mayor, Cllr Lionel Lockley, saying no disturbance was being caused, so the call (from whomever it was) did not truly reflect what was actually taking place. Later, Cllr Lionel Lockley resigned from the Council with immediate effect. Before resigning he stated that he no longer wished to be a signatory for the council.

This was reported in the Keighley News on Thursday 3rd October 2013, thus: “‘Shock’ at resignation of Keighley’s deputy mayor Lionel Lockley”.

When the Annual Accounts became open to inspection, Mrs Mitchell and several other members of the public went to examine the books. What they found was, to say the least, totally unacceptable. This led to the external auditors, PKF Littlejohn being contacted.

The Council blamed the objections to their accounts for the cost of the auditors as reported by the Keighley News on Thursday 19 December 2013 . The report reads:

“Keighley Mayor Councillor Sally Walker revealed it faces additional losses of up to £73,541 due to Government funding changes and the behaviour of a campaign group.” [Ibid]

“The many objections made by this group to the Council accounts, which as a result are still being audited, will result in the town council – and therefore Keighley ratepayers – receiving additional costs of between £30,000 and £50,000.”

As reported by the Keighley News on Wednesday 12th March 2014 – “Auditors in town to probe Keighley Town Council spending”, PKF Littlejohn came to Keighley and interviewed the objectors, in March 2014, and have now published their report, in the public interest.

Set up as a businesses, with business plan drawn up in 2010 showing income streams, we read in the Keighley News how the Civic Centre has morphed into a `Civic Amenity “which does not have a deficit, it has a ‘running cost’.” (Keighley News, Thursday 13th February 2014. “Councillors leap to Keighley Civic Centre’s defence as they admit it might never make money”.)

“Keighley Town Council has interpreted localism as an opportunity to empire-build. [Ibid]

Sadly, the business plan does not service the debt that has been incurred, so residents have to pay a 72.6% increase in the precept. This is a shambles, and it is of the council’s own making.” 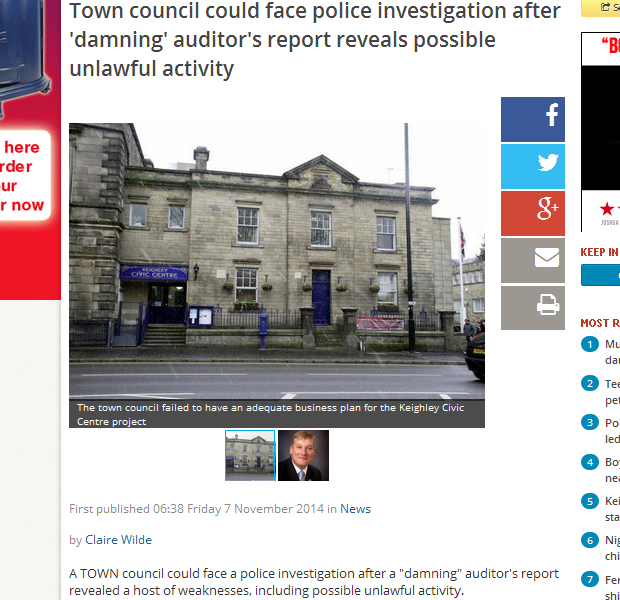 A TOWN council could face a police investigation after a “damning” auditor’s report revealed a host of weaknesses, including possible unlawful activity.

The books of Keighley Town Council were put under the microscope after residents raised concerns about how it was spending public money.

Now, after an auditor found evidence of “actions that may be unlawful”, the town’s MP has written to the police calling for an urgent investigation.

Keighley MP Kris Hopkins (Con) said: “I have been a long-standing critic of Keighley Town Council and, alongside a number of tireless and committed local residents, have raised countless concerns about its reckless and arrogant approach to spending public money.

“This report confirms in graphic detail that our fears were well-founded.

“It is a catalogue of disaster and those responsible for what has happened – they know who they are – must immediately consider their positions.”

The report, published by the Audit Commission, said “significant weaknesses” in the council’s governance could mean it took “actions that may be unlawful”.

In particular, the auditors looked into the council’s decision to embark on an ambitious project to develop a civic centre, the poor financial performance of this centre and the resulting large increase in the council’s precept charge to residents in 2013/14.

It highlights a catalogue of weaknesses, including the council failing to have an adequate business plan for the civic centre project, making loans it had no powers to make and failing to keep an adequate record of cash receipts.

The council also entered into transactions with family members of councillors or council employees without adequate safeguards, the auditors’ report says.

Town mayor, Councillor Graham Mitchell, declined to comment on the report, saying the 30 members of the town council needed time to study it and formulate a response together.

He said: “We have co-operated throughout with the auditors and we will continue to do so.”

One of the residents who raised the alarm was John Hudson, of Keighley.

He said he hadn’t realised the scale of the problems until he read the auditors’ report.

“Reading through it, it is just damning really,” he said.

“I think it’s staggering, what they have done. Everybody was against the precept rise funding the civic centre.”

Mr Hudson said the town council was now “untenable” and called on those responsible for the failings to resign.

Under the terms of the audit, the town council must meet to discuss its findings within 30 days. 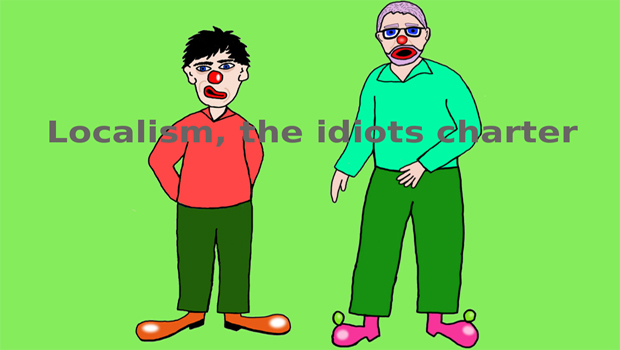