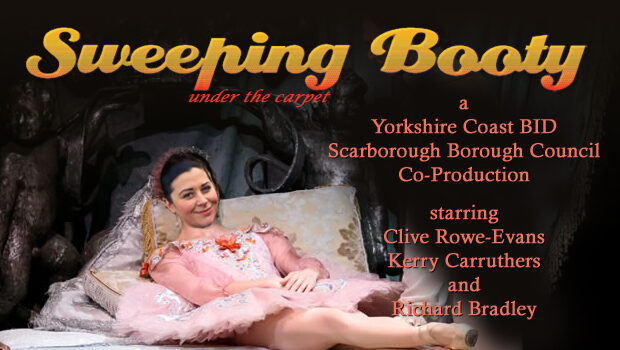 Although it looks like we shall all be denied the pleasure of a pantomime this year, it seems that once again Scarborough Borough Council (SBC) can be relied upon to provide us with a chaotic, side-splitting and thoroughly hilarious rendition of how not to run a Council. Indeed, it is always Panto season at SBC.

The villain of this year’s Panto is the Yorkshire Coast Business Improvement District (BID), or DBID, as its more commonly known. For those of you who have not run across this particularly nasty piece of work, and to refresh the memory of others, it is, perhaps, necessary to give a brief resume of this particular villain’s modus operandi.

However, this la dolce vita existence on the DBID gravy train has, in recent times, at least, been rather rudely upset by the appearance of the Coronavirus.

As we all know, many leisure industry businesses, up and down the country, are finding life tough at the moment and in all probability some will not survive, taking jobs and future investment with them if they close. Obviously, no responsible or caring Council wants this to happen so it is perhaps not surprising that Councils in many regions are doing all they can to help their leisure industry businesses to survive the epidemic. One measure several Councils have adopted is to suspend, or even abolish, their DBIDs.

Well, that is what some Councils are doing. But it will come as no surprise to you, my fellow Scarborough Council Tax Payers, to learn that our Council is not inclined to help anyone; least of all our struggling local business community.

Indeed, it is well known that our current Labour masters are no friends of the local business community. Nonetheless, it was hoped, by many business owners, that, in the current circumstances, Scarborough Council would back their move to have the DBID Levy waived for this year (’20/’21). This would give them all a small financial benefit that might allow some who might otherwise not make it to survive the epidemic.

And, in this regard there, was some cause for hope. As recently as July 2020, Deputy Leader of the Council, Labour Cllr Liz Colling, is on record asking the DBID Company to “defer payments of the levy element of the scheme”.

So, it was with a certain amount of eager anticipation – and hope, no doubt – that the local DBID Levy payers assembled for the recent meeting of the DBID board, where, it was fully expected, the DBID board would be forced by SBC to waive the DBID tax for this present financial year. 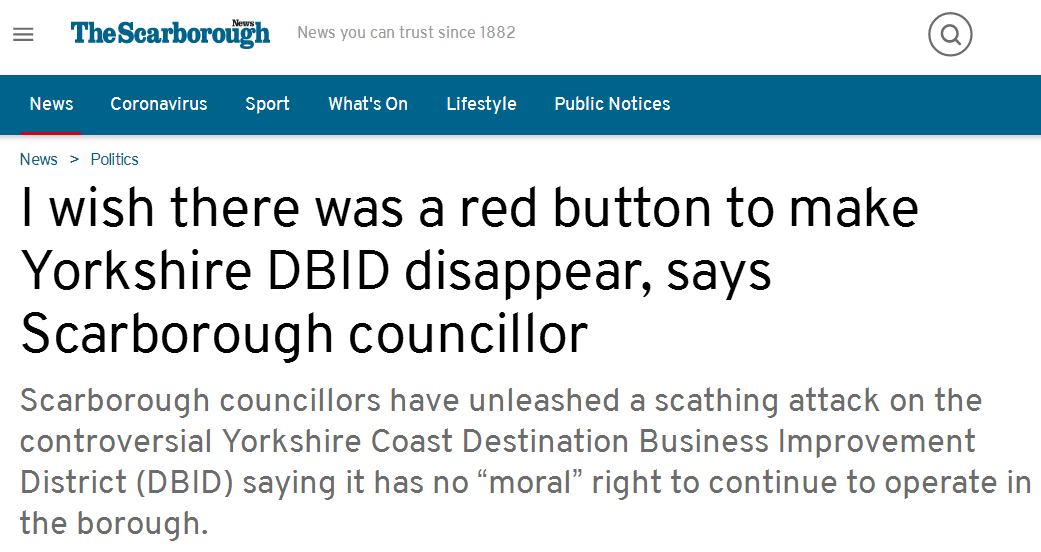 Well, dream on DBID tax payers. The sharks who run the DBID Company and their accomplices at SBC, are, it seems, not going to allow the DBID tax payers any form of let off.

The DBID Company and the Council want their pound of flesh and they are determined to get it.

The DBID board meeting featured a gambit by Dean BULLEN, representing Bridlington’s business community on the DBID board, proposing a motion to waive Year 2 Levy charges of the DBID tax. I am sure Mr Bullen, in view of what the current Labour Leadership of Scarborough Council had said, openly criticising the DBID and wanting the board to waive the tax for this year, was confident that Scarborough’s representative at the board meeting would vote for the tax to be waived.

However, Mr Bullen, and all the others who are being forced to pay the DBID tax by Scarborough Council were about to be disappointed.

Scarborough Council’s representative on the DBID board is none other than Richard (the Brighton Bin Man) Bradley, who, it will be recalled, as Commercial Director of the Council, purchased the St Nicholas Hotel for twice its true market value, a cost of £14 Million big ones to the rate payers, and is currently trying desperately to close the £22 Million deal for the old ARGOS building which will see the Borough’s rate payers lumbered with another £22 Million debt.

The insane ARGOS deal will, if it goes ahead, see the Council build Coventry University a block of student flats just when demand for student accommodation is dropping off a cliff.

However, getting back to the pantomime of the DBID vote, it was confidently expected that, as it had been publically stated that the current Labour Leadership was in favour of the DBID tax being waived for this year, that is how Bin Man Bradley would vote. However, instead of voting how the Labour Leadership claimed they wanted him to vote, Bin Man Bradley chose to abstain. Yes, abstain!!!

The BIN MAN’S abstention allowed Clive ROWE-EVANS, chief beneficiary of the DBID Levy and Chairman of the Board, to used his casting vote in favour of charging for Year 2 – 53.7% voted in favour of charging, 46.3% against. Hence, the Motion to waive payment was defeated. How convenient.

Despite everything that they had said with regard to having the DBID tax waived for this financial year, the Labour Leadership’s delegated representative, BIN MAN Bradley, in effect, allowed ROWE-EVANS to win the vote to impose the DBID tax for this coming year. Stitch up, or what?

So why did the BIN MAN vote as he did?

There are, it seems to me, only two possibilities.

Either the BIN MAN was acting on his own initiative – in which case, he has gone rogue and is working to an agenda of his own and not following the Labour Leadership’s orders.

Or the BIN MAN was acting on the Labour Leadership’s orders to enforce payment of the DBID tax; acting contrary to COLLING and SIDDONS publicly declared intentions, which indicated that they were against the DBID tax being charged, while secretly they wanted the DBID tax to continue. What a Pantomime!

Which hypothesis is correct is, of course, anyone’s guess. Everything that emanates from the Puzzle Palace these days seems to have many interpretations. However, what is certain is that the DBID tax payers have been right royally shafted and it is my guess they will get no comfort from the current Labour Leadership of Scarborough Council.

(a.k.a the Brighton Bin Man)