On 19th July 2011, I published a brief article entitled “Dredging Deep To Uncvover The Truth”. To this day, it is worth a read – it has proved to be somewhat prophetic.

The bones of the article were this:

Injudicious dredging of the harbour wall in Whitby, on the east side and close to the rear of properties on Sandgate, caused a collapse of the pilings such that a main sewage pipe was fractured. Adjacent properties were structurally damaged. Yorkshire Water stepped in quickly to mitigate the ensuing leakage of untreated sewage. Bear in mind that this was a matter of four weeks before the Whitby Regatta, when town and harbour are packed with people, and children and rowers are in the water barefoot throughout the long weekend. Eye-witnesses (and snap-photographers) saw the incident take place. But Scarborough Borough Council (SBC) strenuously denied that the damage had been caused by over-dredging, away from the licensed area (the so-called main channel) in order to excavate additional deep-keel pontoon berths for yachts affiliated to Whitby Yacht Club. The affected property-owners were given the customary run-around.

One week after the publication of my article, the Whitby Gazette covered the situation in an article entitled “Council faces £50K harbour wall bill”, in which a carefully worded statement from SBC’s reluctant spokesperson Ian ANDERSON was quoted:

The report does not say the money is to pay for damage caused by dredging.

Claims of damage have been made. Yorkshire Water and Scarborough Borough Council are working together with stakeholders toward a pragmatic solution.

No admissions have been made.

Yacht-berthing is a lucrative source of revenue for SBC. And revenue is king. Responsibility is not even its lowliest vassal. And culpability comes with a big price-tag. Small wonder that no admissions were made.

So, true to form, SBC policy – from the top down (i.e. Chief Executive Officer Jim DILLON down) was directed towards total denial of any responsibility. The then Head of Legal & Democratic Services Ian ANDERSON was delegated the task of fronting the Council’s absurd and untenable position.

Summoned to attend a Meeting of Whitby Town (Parish) Council to explain SBC’s position, Ian ANDERSON was visibly uncomfortable and embarrassed – the more so when I and a few colleagues began distributing to Councillors leaflets bearing CodHead’s celebrated cartoon: 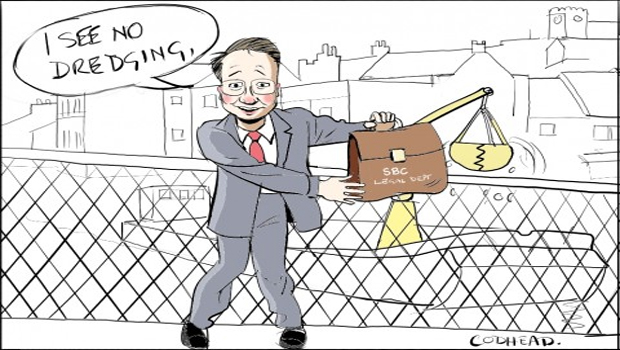 Ian ANDERSON left the meeting glad to escape the unconcealed incredulity of all present. I managed to catch up with him outside and spent some 15-20 minutes bemoaning the fact that it seemed always the case that SBC sought to evade responsibility for the consequences of its ill-conceived plans. My colleague Richard INESON had joined us and he will confirm that I asked Ian ANDERSON if it was simply the case that the Leadership could not accept legitimate criticism over its failures – a suggestion that Ian ANDERSON strenuously (though unconvincingly) denied. But I believed him. And for this reason: I knew (from our ultra-reliable internal source) that he was deeply uncomfortable about compromising his own integrity in service of the Chief Executive Officer Jim DILLON, who is a creature of a far lower order.

Indeed, within a very short time Ian ANDERSON was gone from SBC  (off to be Head of Legal and Clerk to Hull City Council – where I wish him well), after a series of head-to-head full-on rows with ‘Silent Jim’, who (I hear) has a formidable temper to rival that of the Leader, Councillor Tom FOX (of JACONELLI fame).

Ian ANDERSON worked his extraordinarily short period of notice on sick leave. Who can blame him? Why go in to work with liars who expect lies as a part of one’s professional service?

Subsequent to the publication of my “Dredging Deep To Uncvover The Truth”, SBC published a Report signed off by the then Head of Finance & Asset Management Nick EDWARDS, dismissing and denying my conclusions.

Three years down the road, and my thanks go out to a reader who has kindly drawn my attention to an SBC Cabinet Meeting that passed me by six weeks ago on 15th July 2014, in which a Report was presented by Councillor Jane KENYON-MILLER, who, contrary to all logical thinking, is the Portfolio Holder for Finance, Procurement & Legal, and signed off by – you guessed – Director of Business Support Nick EDWARDS, the successful local businessman and property management entrepreneur:

So at least we see – albeit couched in the evasive language that has become so familiar to those of us who take an interest in the machinations of the SBC upper echelon – the tacit admission that the residents of Whitby were right, SBC was telling porkies, and that a man of good conscience is not for long able to make an honest living in the shadow of the shady gang.

But please take note of the fact that the admission is no more than tacit – the dreaded word ‘DREDGING’ does not make an appearance in Councillor KENYON-MILLER’s form of words.

The ‘confession’ is only partial, but wholly insincere (“alleged” damage? – if it were not proven, why would SBC be parting with £230K – our £230K – and not the £50K quoted in the Whitby Gazette along with Ian ANDERSON’s buck-passing passive-voice remark?

“No admissions have been made”

Why not the active-voice “I have made no admissions”? Could it be that Ian ANDERSON wished to distance himself from SBC’s lies?

The damage was real, alright – not “alleged” – and the blame resides solely with Scarborough Borough Council.

But the truth is unspeakable to the career liar.

I am not anticipating any words of apology from Councillor Jane KENYON-MILLER or Mr Nick EDWARDS. Those kind of people never own up, even when caught red-handed putting their names to a pack of corporate lies.

Hats off to Ian ANDERSON for walking away from them. 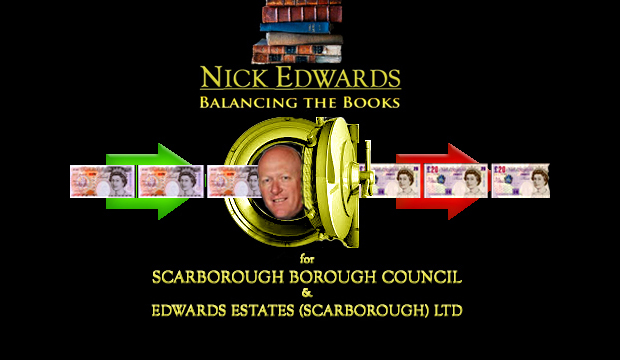