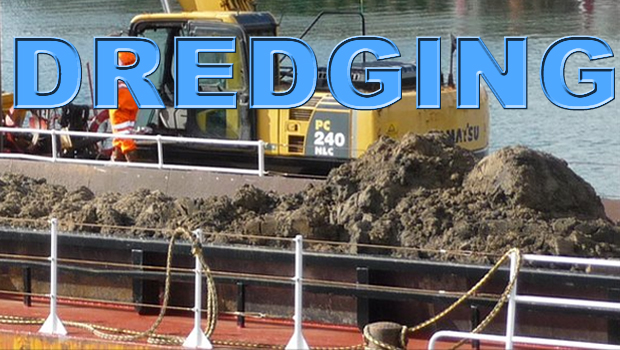 Today, Tuesday 19th July 2011, a Report (numbered 11/347) will be presented to the Cabinet of Scarborough Borough Council by the Head of Legal & Support Services, Mr Ian Anderson. It is a Report on the notorious affair of the collapse of the harbour wall between the Swing-Bridge and the RNLI Lifeboat Station in the spring of 2009.

The Report has been signed off by Ian Anderson, as well as by Brian Bennett (Head of Tourism & Culture) and Nick Edwards (Head of Finance and Asset Management).

Aspects of the Report are deeply disturbing.

It is commonly known among harbour-users and bridge-operators that the piling supporting the harbour wall collapsed as a direct consequence of being undermined by dredging operations undertaken to ensure sufficient depth of water to accommodate the keels of yachts belonging to members of the Whitby Yacht Club that berth at the pontoon immediately adjacent to the point of collapse. Richard Ineson, amongst others, photographed the dredging activities.

The collapse had an immediate and unfortunate consequence; a sewage pipe was ruptured and untreated effluent was released into the harbour. Yorkshire Water immediately acted to repair the leak and the collapsed section of harbour wall.

What was not directly apparent was the structural damage to properties along both sides of Sandgate, including Councillor Dorothy Clegg’s glass duck emporium, whose foundations were shaken by the collapse. Naturally, property-owners were looking for compensation – and are still, two years down the road.

So Yorkshire Water commissioned an independent report on the causes of the collapse from leading engineer Bernard Jones of Mouchel/Costain.

Bernard JONES’ report has this to say about the cause of the collapse:

4.10.13 – Based on correlation of available bathymetry surveys and Ordnance Survey maps with historical harbour developments and operations, it is my opinion that the probable cause of the failure of the sheet pile wall was the reduction in the level of the harbour bed adjacent to the wall, as a result of the deepening of the main navigable channel within the harbour, during 1979, and subsequent MAINTENANCE DREDGING, together with OTHER DREDGING OPERATIONS CLOSER TO THE WALL, TO MAINTAIN WATER DEPTHS AROUND THE WHITBY YACHT CLUB PONTOON.

So, in layman’s terms, Bernard Jones has confirmed what locals knew all along; the collapse was caused by the DREDGING.

I would like to know why this conclusion has been reported to Cabinet by Mssrs ANDERSON, BENNETT and EDWARDS, thus:

1.2 Yorkshire Water subsequently took advice upon the reasons for the failure. The expert commissioned by Yorkshire Water advised that in his opinion there had been a GRADUAL MIGRATION OF MATERIAL caused harbour bed levels immediately in front of the piles so that it become too low to support the load behind the piles leading to the localised collapse.

Strange, isn’t it, that Mssrs ANDERSON, BENNETT and EDWARDS have managed to translate Bernard JONES’ specialist opinion into language that avoids the word ‘DREDGING’ and replaces it with ‘GRADUAL MIGRATION OF MATERIAL’?

Strange indeed, but it is at least consistent.

“I am somewhat confused by your reference to Scarborough Borough Council dredging and your suggestion that this has some relevance to this matter.”

In another email, he stated:

“I can confirm that you are incorrect in your supposition that the dredger in the photograph was undertaking dredging and your assumption that it was acting under the instruction of Scarborough Borough Council.”

“The suggestion that Scarborough Borough Council have in any way caused damage by dredging is refuted.”

It could be argued, at a pinch, that Mssrs ANDERSON, BENNETT and EDWARDS have been trying to save the Council tax-payer money by angling to pass the buck to Yorkshire Water – not necessarily the sort of unimpeachable conduct appropriate to civil servants, even if it was ‘well-intentioned’.

But why would they want to mislead their own Cabinet – elected Councillors whose sworn duty it is to hold Council Officers to account? The answer, perhaps, lies in the fact that somebody must have authorised the dredging so close to the harbour wall to accommodate the deep keels of the yachts.

That ‘somebody’ should have checked how deep the piles were. (As it turns out the were only 4.5 meters; their replacements are 10 meters).

So who screwed up? Is that person still employed by SBC?

And why is it that Council Officers are so keen to close ranks – to mislead, obfuscate, deny and to twist the words of the experts – to ensure that none of their own is ever held to account for their incompetence or dishonesty?

Why do our elected Councillors let them get away with it?

We have been promised ‘transparency’ and ‘accountability’.

Can we have them NOW, please?