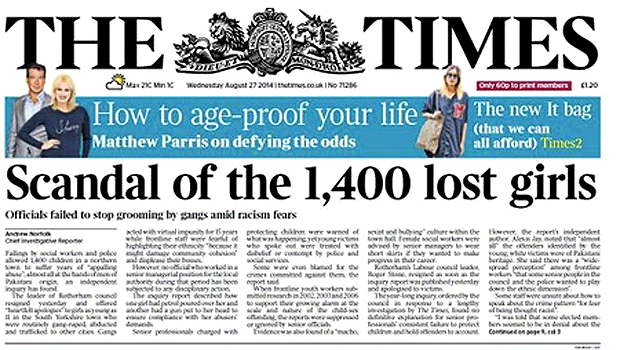 A Letter to the Editor from Richard INESON of Whitby (and Scarborough), who joins the Enquirer in deploring the shameful disregard of the plight of the victims of the Rotherham sex-abuse scandal and its systematic cover-up, by those in positions of trust, over a period of many years.

The Conservative Party, or any other political Party for that matter, have nothing to crow about with regard to the recent revelations about the sexual abuse of children in South Yorkshire.

There is much to emerge about some very murky goings on in Westminster, over a long period of time , involving some very senior politicians. Local Conservatives, before getting on their high horse, should be asking about how Jaconelli (one time Mayor of Scarborugh and prominent local citizen) and Saville (one time prominent local citizen and sexual predator) were allowed to get away with their disgusting behaviour, in this area, again, over a period of many years. Saville of course, being a close friend of Thatcher, and regular visitor to Chequers.

On non-paedophile/sexual matters, they might also like to consider how North Yorkshire Police Authority, under the Chair of prominent local Conservative, Miss Jane Kenyon (more recently Mrs Kenyon-Miller) allowed senior Police Officers, in North Yorkshire to do as they pleased with the public purse – the £28,400 shower installed in Chief Constable Della Canning’s office, the £500,000 spent on Range Rovers and Volvo V70s for use as ‘command posts’ whatever they might be, but the Police Officers to whom these cars were allocated were not qualified to drive them on Police business, so these cars were then sold to the Police Offices at a nice discount.

Then there was the business of Chief Constable Maxwell and his sidekick Briggs, who left us, under a cloud, and have, in recent times, been asked to repay £100,000 of our money, which they were given, to keep them ‘the top of their game’ (whatever that was) but which was never accounted for.

There is much more to relate about NYP and the mismanagement of this Police Force under the stewardship of the said Miss Kenyon and the rest of the members of the North Yorkshire Police Authority and the North Yorkshire Police Authority Management (?) Board. Meanwhile, it would be more worthwhile if everybody concentrated on putting the lives of the (at least) 1,400 victims of the appalling abuse, which they have endured, in South Yorkshire (where the Hillsborough disaster investigation is still bubbling away on the back burner) over many years, back to as near normal as is possible after their horrific sufferings, which were allowed to continue, unchecked, by everybody, of all religious, cultural and political persuasions.

To use this stinking mess as a means of political point-scoring, demonstrates the depths to which some people will descend in trying to maintain the moral high ground, for themselves,whilst trying to shovel the blame, for this barely believable saga of unspeakable cruelty, on to anyone other than themselves.

This is as despicable as it gets, in my view. Think of the victims, they are the ones who need our help and sympathy. No one is blameless.