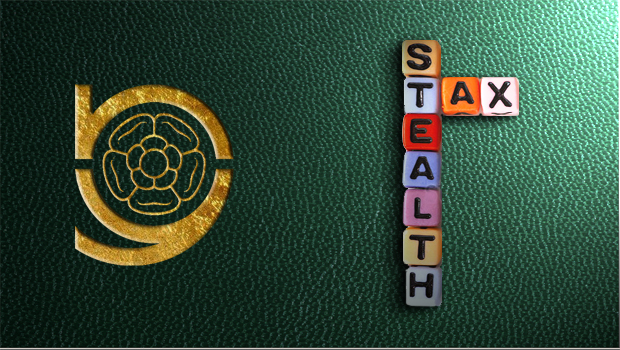 East Riding of Yorkshire Councillor Andy STRANGEWAY [Ind.] also pursued clarification of similar misleading information in respect of the Adult Social Care increment of Council Tax billing by his own Council, successfully forcing ERYC to amend its position and revise its web-site accordingly.

To summarise the above reports, the majority of those receiving Council Tax bills for the 2017/18 financial year were confused by the arithmetic purporting to show that their Precept contribution for Adult Care Services risen by only 2%.

Take a look at TT’s figures for the past two years:

Looking at the third row of the above table, this seems to indicate that there was an increase of only 2% in the NYCC Adult Social Care Precept (far right column).

The explanation provided by the Billing Authority was that, for reasons unclear, the third row figures were required by central government to be shown in a different way to the other Precepts (NYCC, SBC, NY Fire & Rescue Services, the North Yorkshire Police and the Police & Crime Commissioner for North Yorkshire).

We were told that the figure denoting the NYCC Adult Social Services Precept for 2017/18 was, in fact, the sum total of the 2017/18 Precept and the 2016/17 Precept combined – and that the 2% in the far right column (which, in the case of the other Precepts indicates the percentage increase in 2017/18 from the 2016/17 figure), referred, in fact, to the NYCC Adult Social Services Precept percentage expressed as a percentage of the overall Council Tax Bill. 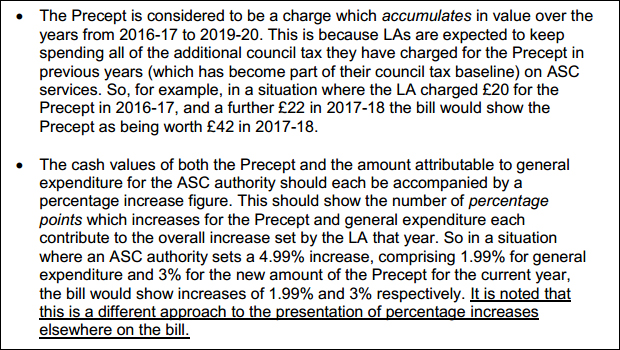 So I lodged a Freedom of Information request with NYCC seeking the following information.

1) How much was raised across North Yorkshire during the financial year 2016/17 by the Council Tax precept for Adult Social Care?

2) How much will be raised across North Yorkshire during the financial year 2017/18 by the Council Tax precept for Adult Social Care?

My request was lodged on 25th April 2017. The Freedom of Information Act 2000 allows authorities twenty working-days to provide a response. On 28th May 2017, I received the following response:

The difference amounts to 1.9% – which almost accords with initial interpretations of the figures on Tim’s Council tax bill (“Looking at the third row of the above table, this seems to indicate that there was an increase of only 2% in the NYCC Adult Social Care Precept”.

I am by no means alone in challenging this nonsense. FullFact, the UK’s independent fact-checking charity, reports similar concerns from multiple sources.

One could be forgiven, at this point, for concluding that the whole business of the NYCC Adult Social Care Precept was deliberately shrouded in mystery and obfuscation – that the figures were purposely shuffled around to obscure the bottom line, which has now been made abundantly clear by the response to my Freedom of Information request. The fact is that whatever the true interpretation of the legislation and government guidance, every Council Taxpayer in North Yorkshire has been required to double her/his contribution to Adult Social Care in the County, and that 2% figure on your Council Tax bill is at best downright misleading and, at worst, an outright lie.

I have stated elsewhere, and I repeat it now, that I do not for one moment begrudge those in need of Adult Social Care one pennyworth of the resources made available to them. It remains woefully inadequate – as one has come to expect from caring, sharing Conservative policy.

But if ever the expression “STEALTH TAX” carried any meaning . . .

Why “Stealth”? Because it should be remembered that prior to 2016/17, the burden of North Yorkshire County Council in respective of providing Adult Social Care was annually subsumed within the overall NYCC Precept – which also rose by 2% from 2015/16 to 2016/17; then rose again by another 2% from 20216/17 to 2017/18, despite the inception of a separate Precept for Adult Social Care.

In my view, if a double-glazing contractor or a cavity-wall insulation installer were to double its charges, concealing the fact of having done so by a flim-flam of conflicting information and a convolution of arcane calculations, the client – the end-user – the customer – YOU! – would feel thoroughly swindled. There would be hell to pay. And rightly so. Irate citizens would soon beat a path to the door of the Trading Standards Institute.

Unfortunately for the Council Taxpayers of North Yorkshire, they would find themselves here:

“Go back to Old Kent Road. Do not collect any remedy at all. And stop complaining; pay up – or the  billing authority (SBC) will send you a home-made Summons, perhaps even a home-made Liability Order (neither of which has passed before the eyes of the beak) and enforce payment. Read all about that here.”

So I have lodged another Freedom of Information request with North Yorkshire County Council:

1) In the financial year 2015/16, what was the grand total of monies disbursed by NYCC in the process of providing Adult Care Services.

2) In the financial year 2016/17, what was the grand total of monies disbursed by NYCC in the process of providing Adult Care Services.

3) For the financial year 2017/2018, what amount is projected to be disbursed by NYCC in the process of providing Adult Care Services.

I want to know. Where does the money really go?

And I ask because my NYCC insider tells me that nothing like £10 MILLION will be spent in 2017/18 on the objectives for which the money has been demanded – Adult Care Services.