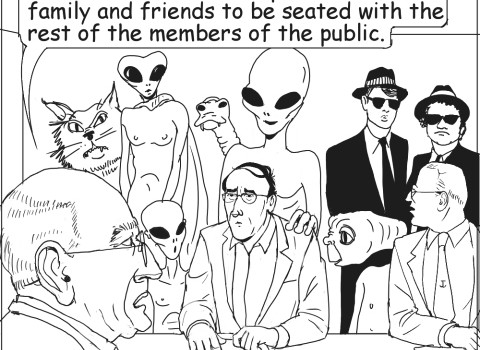 It is over forty years since I drove from Mashhad, in eastern Iran, south east along the valley of the Jamshidi river, which broadens as it approaches the Dogharoun border-crossing, the gateway to Afghanistan. No doubt things have changed since I traveled that road. It was no more than a two-lane dirt track then, flanked by scorched, rocky ground stretching away to a tapering range of bare hills. The sense of isolation, not only in geographical space, but also in time – for this is a landscape scarcely changed since the times of the Old Testament – was awe-inspiring.

As we approached the Afghani border-post, it became apparent that something unusual was taking place. A handful of cars and two or three lorries were parked hapharzardly in the no-man’s land between Iran and Afghanistan. Before the barriers, which had high chain-link fencing drawn up behind – a continuation of the fence that ran off into the distance to the north and south – perhaps twenty people were gathered in a noisy crowd. The Afghani border guards were obviously on some state of alert.

A green Porsche stood twenty metres beyond the barrier. It appeared to be in the process of being minutely dismantled. Slowly the story emerged. A German, together with his wife and eight-year-old daughter, had been caught attempting to smuggle a large piece of hashish, moulded and painted to resemble some part of the motor. Apparently, the authorities had reason to believe that these people were part of a clandestine ‘convoy’ of drug-runners, travelling en famille as cover. The barrier remained closed.

Afternoon turned swiftly to twilight. A handful of vehicles had pulled in and the crowd had grown and became more impatient. Finally, an officer came out and addressed us in several languages, including French and English. For security reasons, the border would remain closed overnight. We should accept that fact and make provisions either to camp, or to return to Iran and seek overnight accommodation.

An impromptu camp began to establish itself. Someone built a fire – despite daytime temperatures in the 120s, it can freeze in the night in that barren land – and people of many nationalities mingled. Food was shared, and water. Then, as night fell – a night of such darkness and clarity as I have never seen in more ‘civilized’ regions – someone began shouting and pointing at a slow-moving white light, approaching obliquely from the north west along the line of hills to our south. It zigged and zagged, then, approaching the line of the border, it accelerated very quickly at a rising angle of perhaps seventy-five or eighty degrees.

Everyone was amazed. Sore amazed. It was like a scene from Spielberg’s “Close Encounters of the Third Kind”. Everybody was totally convinced that we had witnessed a UFO experience.

Me too – at least in the heat of the moment. But that was over forty years ago, and with the benefit of today’s hindsight, looking back over thirty-odd years of military contention in Afghanistan, it is easier, and more comfortable, to believe that what we had really seen was a spy-plane or drone – probably of US origin.

Despite that ‘apparent’ close encounter, I do not believe in alien spacecraft from another galaxy or a neighbouring dimension scooting around the desert documenting border closures and drug-trafficking.

I do not believe in ‘ghosts’ – but I know a Parish Councillor who does. That is his business.

I do not believe in ‘fairies’ – but I know an Irish MP who does. That is his business.

I do not believe in ‘astrology’ and ‘horoscopes’ – but I know a Parish Councillor who will not set foot out of the house without first consulting his ‘stars’.

I do not believe in ‘re-incarnation’, or ‘hypnotic regression to a former life’ – but I know a Borough Councillor who does. That is his business.

I do not believe in ‘vampires’ and ‘zombies’ – but I know a Minister of the Church who does. That is his business.

I do not believe in ‘heaven and hell’ – but I know plenty who do. That is their business.

I do not believe in ‘transubstantiation of the flesh’ – that the wafer and the wine of the Roman Catholic mass are not merely metaphors for the body and blood of Jesus of Nazareth, but actually, really, fundamentally his true incarnation here on earth – but I know at least three County Councillors – and plenty of other people – who do believe exactly that. They are Roman Catholics, and that is their business, too.

Our business is to respect the rights of others to uphold – and express – whatever beliefs they hold dear – however incredible they might seem to the rest of us.

What I do believe is this; our life on this earth is a continuing mystery – from our first awareness as babies and toddlers, to our most intense speculations as we lie, ultimately, on our death-beds facing – who-knows-what?

So I am appalled to read the sensationalist way in which Councillor Simon Bard PARKES has had his declared beliefs pilloried in the press – not only of this locality, but around the world.

Sure, a nine-foot green alien ‘mother’ is pretty far out. Actually, really far out. But so what?

A few years after my ‘UFO’ experience (and I have never had another), I lived for a while in Hackney in east London. I lived in a squat in Beck Road – a line of decrepit terrace houses long since redeveloped – my temporary base whilst hustling for a record deal. It was a rough area. Very rough. My neighbours were, shall we say, a ‘bohemian bunch’ – artists, musicians, actors, rent-boys, shop-lifters, pick-pockets, drug-dealers, fellow travellers of every faith and credo – some of whom have made good, or moved away, or died. Some have remained in Hackney.

I talked to one last week. I wanted to check out some anonymous ‘comments’ on the Scarborough Evening News website that have insinuated that Simon Bard PARKES only imagines being a Borough Councillor in Hackney in the nineteen-nineties.

Councillor PARKES is remembered well – and in high regard – for his out-on-the-streets frontline style of pro-active representation, tackling bribery and corruption in local government, tackling poverty, tackling drug-dealing and violence on the streets – until his family could bear it no longer.

So I do not rush to judgement. Simon Bard PARKES, the private individual, may have some ‘whacky’ beliefs – that is his business.

As an elected Councillor, Simon Bard PARKES is in the business of representing the people of Whitby in general, and of Stakesby Ward in particular. Unlike a round dozen of this Whitby Town (Parish) Council, Councillor PARKES has the mandate of an electorate, many of whom he canvassed door-to-door, asking about their concerns and aspirations. They have voted their confidence in him.

I believe that Councillor PARKES has the experience, the intellect and the moral strength to do more for Whitby than many (perhaps any) of the other Councillors – many of whom have no mandate and hold their seats only through the cronyism of co-option.

And there is a sinister element to this so-called ‘news’ story – in fact, information already in the public domain for several years: the timing.

I happen to know that Councillor PARKES has been stripped of his nomination as candidate to contest Conservative Councillor Joe PLANT’s seat for the Streonshalh Ward in the North Yorkshire County Council elections in May 2013 (though his candidacy may yet still be valid). So it is possible that this is a political ‘stab in the back’ – ‘leaked’, perhaps, by one of Simon PARKES’ own colleagues in the Labour Party?

Equally, it may have come from his Tory opponents. It has a certain flavour.

If there is shame in this episode, it does not reside with Simon PARKES.

So I say give Councillor Simon Bard PARKES the benefit of the doubt. He has brought (albeit inadvertently, and with, at the very worst, a humorous message) more worldwide publicity to Whitby than anyone since Count Dracula – in whom I most certainly do not believe.

Let me leave you now, appropriately enough, with another Bard – the one we call THE Bard:

“There are more things in heaven and earth, Horatio, Than are dreamt of in your philosophy.”