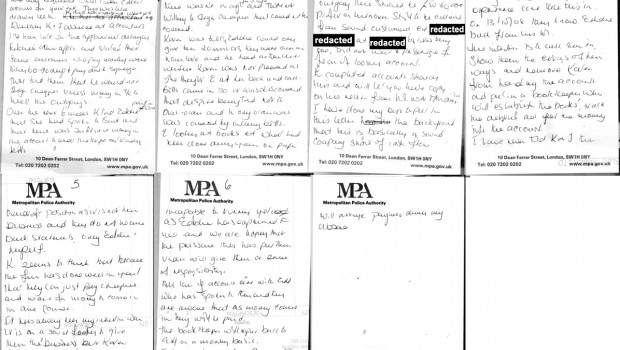 “The letter of the law”

“In relation to the position of Company Secretary at Dales Timber Ltd, Councillor Kenyon was in fact unaware of the matter”.

In a Decision Notice from the Standards Sub-Committee of the North Yorkshire Moors National Park Authority (NYMNPA), dated 8th August 2011, a complaint to the NYMNPA Standards Committee (by David Clark) regarding Councillor KENYON’s undeclared Company Secretaryship in DTL, was dismissed on the grounds that “there was no evidence that the member [Councillor KENYON] signed the Companies House form”

In fact, it goes on to state, “members noted that the signature on the Companies House form did not closely resemble other examples of the subject Member’s [Councillor KENYON’s] signature”

The signature on the document is in the name of Ms KENYON, but NYMNPA allege that it is NOT her signature! The only possible implication is that the signature must be a FORGERY.

The NYMNPA Standards Sub-Committee determined, one year ago, that THE SIGNATURE IS A FORGERY!

Setting aside the matter of the forgery for a moment, let us examine, in greater depth, Councillor KENYON’s denial to the Standards Sub-Committee that she had ever assumed the appointment as  Company Secretary of DTL.

The veracity (or otherwise) of this denial has been called into question by the fact that the Public Record shows that Councillor KENYON, from time to time has, in fact, declared an interest in DTL.

Now this demonstrates that there are inconsistencies in the Public Record, on the basis of which I have called (in vain) for a thoroughgoing investigation to be performed by an impartial body that is demonstrably not susceptible to any undue influence that may (or may not) be brought upon it by any party seeking to defend Councillor KENYON.

Her position appears to vary according to circumstance. Perhaps for that reason, some readers seem to be prepared to believe Councillor KENYON’s protestations that she was ‘unaware’ of her interest and/or Secretaryship in DTL, or perhaps even ‘unaware’ of its very existence – though the notion that she could be ‘unaware’ of her life-partner Councillor Thomas William (‘Bill’) Miller’s ownership and Directorship of DTL stretches credulity a tic too far.

As a result of the articles run on Real Whitby, a number of witnesses have now come forward who have become aware of the controversy surrounding Councillor KENYON and wish to put the record straight. I would emphasize that they were unknown to me before they approached me and have not received any fee or inducement to speak out. They simply want the truth to come out.

As a result, I am now able to share with the public evidence that appears to irrefutably demonstrate that, contrary to her evidence to the Standards Committee, Councillor KENYON was fully cognisant of the existence of DTL, and indeed took a leading rôle in its financial management on a hands-on basis. It is my contention that the following information provides unequivocal proof that Councillor KENYON, despite her denials, was very much the de facto controlling influence behind DTL, contrary to her evidence to the Standards Committee.

To set the context, allow me to explain the following background information:

Following a chance encounter in the street (early in 2005), a reconciliation of sorts seemed to have taken place. In Spring 2006, ‘Bill’ MILLER activated the dormant AF&GSL, without Jeremy’s knowledge, to take advantage of some trading opportunities, at premises on Whitby Road, Pickering. The premises were at that time occupied by the then owner, who was purveying timber products, trading as Dales Timber (DT) – not a Limited Company. [NB: DT was, at that time, an entirely separate legal entity, in no way connected to ‘Bill’ MILLER].

My information, confirmed by the Public Record,  is that ‘Bill’ MILLER provided Companies House with the appropriate documentation:

The signatures of Jeremy Peter MILLER and his wife Karen MILLER do not appear on the Companies House 288b documents terminating their Directorships in AF&GSL. The copy in my possession bears the hand-written inscription “Not signed by me – not known to me” signed and dated 21st August 2008, by K Miller).

From Spring 2006, DTL proceeded to trade from the Pickering address (rented from the owner) with clients including Ryedale District Council (RDC), the North Yorkshire Moors National Park Authority (NYMNPA) and North Yorkshire County Council (NYCC). (These were presumably the ‘trading opportunities’ to which ‘Bill’ had referred).

DTL traded under the day-to-day management of Jeremy Peter MILLER – who states that he was never informed of the name-change (from AF&GSL to DTL) or of his removal as Director – and believed, on the basis of assurances received from his father, that DTL was, in fact, an entirely new company, formed by ‘Bill’ Miller, for whom he now worked as an employee in the capacity of yard manager.

Throughout this period, Jeremy Peter MILLER’s wife Karen MILLER helped out in the office on a purely voluntary basis, to assist Jeremy with his workload. Neither Jeremy nor his wife Karen was party to ‘Bill’ MILLER’s business dealings.

Cutting to the chase; one day, ‘Bill’ turned up at the office with a large volume of paperwork, which he instructed Karen to deal with as she thought appropriate.

The following text is a transcript of a hand-written draft letter, on Metropolitan Police Authority note-paper (!), apparently in the genuine hand-writing of Councillor Jane KENYON (I am no graphologist, but I have seen many examples of Councillor KENYON’s handwriting), which I would contend provides irrefutable evidence that, at the time of writing, she was in truth the de facto Company Secretary of Dales Timber Limited and, far from being ‘unaware’, had an intimate and in-depth knowledge of the management and financial affairs of DTL.

The context attests to:

Here (below) follows a transcript of the hand-written draft letter. I have highlighted certain passages (by means of applying underlining that does not appear in the original text) in order to draw the reader’s attention to points of special significance in respect of the assertions stated above.

I leave it to readers to form a considered opinion as to whether or not this text could conceivably or plausibly have been written by a person who was ‘unaware’ of the existence of DTL and/or ‘unaware’ of her (alleged) Company Secretaryship of DTL. The verdict is yours, as they used to say on the BBC.

TEXT OF DRAFT LETTER FROM JK TO BANK

End of July requested Dales Timber Ltd. accounts for year end. This was like drawing teeth. K did not understand what was required.

Eventually, K and J arrived at accountant’s one and a half hours late for the appointment, delaying Eddies’ other appts, and stated that some customers who pay monthly were taking 60 to 90 days to pay due to squeeze.

TWM told them that he would not sign cheques unless money was in a/c to meet the outgoings.

Over the next 6 weeks, K told Eddy (paid in £50,000) that she had spoken to bank and that there was sufficient money in account to meet the large outstanding bills.

On EH calculation from Bank Statement there wasn’t enough (for three large) and TWM not willing to sign cheques that could not be covered.

Karen was told Eddy could only give them 20 minutes as they were over an hour late and he had another client waiting. Karen was not pleased because she thought E at her beck and call.

Bills came in so it was discovered that despite being told not to over-order and to only order was was covered by incoming bills.

E looking at books at what had been done during year on paper woud send to my customers, not with[illegible] outgoing there should be £50,000 – £60,000 profit on turnover S&M to be collected from sound customers eg [name redacted] at [redacted] Estates being one. Did not want to pressurise for fear of losing account.

E completed accounts showing this and he will let you have copy on return from hols on Monday 13/10.

I have done my best to put in this letter the background that this is basically a sound company short of cash flow. Clearly, K and J not having business experience can’t take this in.

On 13/10/08 they know Eddy back from his hols. His intention is to call them in and show them the errors of their ways and remove Karen from handling the accounts and put in a book-keeper who will establish the books, track the debtors and pay the money into the account.

I have never told K and J the overdraft position as it is not their business and they do not have Bank Statement, only Eddy & myself.

K seems to think that because the firm has done well in year 1 that they can just pay cheques and wait for money to come in in due course. It has always been my intention when it is on a sound footing to give them the business, but Karen seems to think that it is already their business but they are incapable to running yet. As Eddy has explained to me, and we are hoping that the pressure this has put them under will give them a sense of responsibility.

All the NP accounts are with EH who has spoken to them and they are aware that as money comes in they will be paid.

The book-keeper will report back to EH on a monthly basis. I am on holiday from 9/10 to 27/10. In the meantime, if money is there EH will arrange payment during my absence.

Noteworthy is the fact that this draft letter refers, in the past tense, to Jeremy and Karen’s visit to the accountant in Bridlington on or about 20th September 2008; and also refers, in the future tense, to Mr Eddie HOPSON’s return from holiday on 13th October 2008. (It refers to ‘TWM’ in the third person).

This dates it to a three-week period in late-September/early-October 2008 – 14 months after Councillor Kenyon withdrew her interest in DTL from her Register of Interests.

So we see that Councillor Jane KENYON was clearly actively involved in the management of  DTL at a time when she did not declare the fact of her interest – a fact that she also subsequently concealed from the NYMNPA Sub-Standards Committee investigation almost three years later in July/August 2011.

So there it is. I submit that, contrary to Councillor KENYON’s protestations and assurances, she appears clearly to have shown – by her own hand – to have:

What is someone like this doing being Chair of a Police Authority?

On 1st July 2012, I emailed SBC Leader Councillor Tom FOX, asking him the following question, in the public interest:

“Are you currently satisfied with your appointment of the present Portfolio Holder for Finance, Procurement and Legal?”

Needless to say, I have received neither acknowledgement nor response.

If Councillor FOX is unable to answer that question, then I would contend that he has, in fact, already answered it in the omission and by his silence.

The truth is that he cannot morally or lawfully defend the appointment of any proven liar.

I believe that the time has come – may indeed be long past – when the entirety of Councillor Jane KENYON and Councillor ‘Bill’ MILLER’s actions in public and business affairs must be subjected to a thoroughgoing investigation by a body geographically removed from her extensive sphere of influence.

Where is the man or woman of authority with the courage and integrity to take this forward?