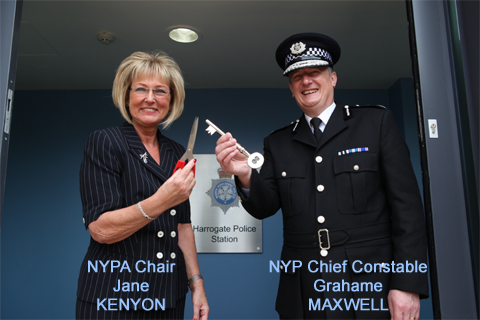 This is the freedom that we know as ‘freedom of speech’.

In recent months, Real Whitby has published a number of articles addressing the inexplicable activities taking place within the senior management levels of policing institutions in North Yorkshire.

In my view, the NYPA was the proper and appropriate body, therefore, to approach for information regarding the accountancy procedures in respect of the ‘Personal Development Fund’ payments to high-ranking Officers above and beyond their salaries and allowances/expenses – as widely publicised in local and national media. (The Yorkshire Post reported on this back in February 2012 in an article entitled “Police chief mauled by watch-dog over £11,000 ‘executive coaching’”. It later transpired that former Chief Constable Grahame Maxwell was also favoured with an even larger disbursement.

So on 13th April 2012, I lodged a Freedom of Information request with the North Yorkshire Police Authority (NYPA), in respective of some information regarding the so-called ‘Personal Development Fund’  allowances paid to certain high-ranking NYP Officers.

I asked for the following information:

The response, received on 31st May 2012 (well outside of the period in which NYPA stood under a legal duty to respond) informed me that:

Now this is all very curious, because I have recently been passed the response to a very similar Freedom of Information Act 2000 request, in more general terms, addressed by another member of the public not to the NYPA, but to the North Yorkshire Police (NYP) – who, as we have just been informed by the NYPA, not only hold the information that I requested from the NYPA, but in fact actually originated it.

The FOIA to the NYP requests:

Just that. Nothing else. Even less than blood out of a stone.

So if neither the NYP nor the NYPA holds that information, who was it that authorised the pay-out of tens of thousands of pounds to high-ranking Officers who were not required to account for it in any way?

Now whilst it is true that my two questions to the NYPA (who claimed that the information was held and originated by NYP) request a more detailed response than the two slightly more general questions asked by the other member of the public of the NYP themselves, it should be clear that the bottom line is that it simply cannot be true that neither the NYP nor the NYPA holds any information about the procedures under which tens of thousands of pounds of the public purse have been paid out to high-ranking Officers – including the then Chief Constable Grahame Maxwell and his Assistant Chief Constable Adam Briggs, who have since both been terminally discredited and are now out of the force.

Clearly, somebody must know. After all, the good taxpayers of North Yorkshire paid an awful lot of money to the North Yorkshire Authority Treasurer – a qualified accountant – to initiate a regime of strict financial control.

Therefore, either the NYP or the NYPA has provided a false response to a Freedom of Information request.

But even that begs the question:

Who was it who actually authorised the payments?

That is where the buck stops.

With whom rests the ultimate responsibility for these unaccounted for (and unaccountable) hand-outs?

Well, we already know, do we not? We know because the NYP web-site tells us.

Not much doubt there: “North Yorkshire Police Authority is the local authority with accountability for the policing service”.

Councillor Kenyon sits at the head of the authority remitted with the task of monitoring the accountability of the North Yorkshire Police. Tens of thousands of pounds have been distributed to ranking Officers, and yet Freedom of Information requests have established that neither body – neither the NYP nor the NYPA – acknowledges any responsibility for, or knowledge of, where the money has gone or on what it has been spent.

Surely the buck stops, without one scintilla of a doubt, with Councillor Jane KENYON.

In my view, it is in the public interest that Councillor KENYON must now be held to account for that unaccounted for (and unaccountable) disbursement of ‘Personal Development Funds’ – amongst many other matters.