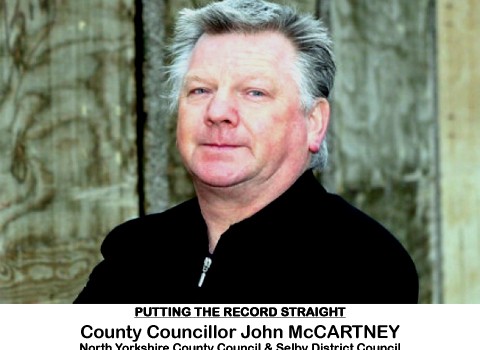 All has been quiet on the Double-Dipping front for some time now; not really surprising given that North Yorkshire County Council elections were scheduled for the 2nd May. No-one was willing to stick their head above the parapet, given it might affect their chances in the election.

In an email, Cllr McCartney has revealed that he was unaware his NYCC Allowance included a substantial sum for Broadband. On the strength of the information in the articles on this site he contacted Selby District Council and arranged to repay monies he’d received from Selby District Council for IT. Well done, Sir!

Of the 72 Councillors that comprised North Yorkshire County Council during the last term of office, 49 of them were dual-hatted Councillors. Of those 49, 37 were receiving an IT/Broadband Allowance from two Authorities or Double-Dipping as it has become known.

There was a recent outbreak of concern that elected members must abide by the Nolan Principles by the Deputy Monitoring Officer at Scarborough Borough Council, Lisa Dixon. One wonders why there was no regard for the Nolan Principles during the Standards Committees hearings into the Double-Dipping at NYCC and SBC during 2012?

Do Carole Dunn (Monitoring Officer, NYCC) and Lisa Dixon (Monitoring Officer, SBC) still believe that Councillors are fully entitled to claim the IT/Broadband Allowance from both Authorities? Why didn’t they take the Nolan Principles into account during those hearings? I think we should be told!