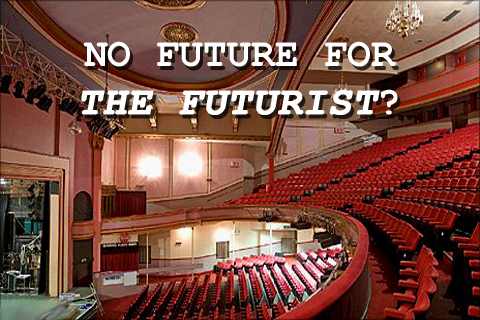 The Futurist Theatre sits empty, no shows during the spring, summer shows start August 1st through to September, visitor numbers slashed, future looking bleak for autumn/winter, local traders income slashed and the local economy has taken quite a hit.

The Futurist attracts different groups of visitors; some will come to take in a show, stay at local hotels, eat and drink at local restaurants and bars. Others will come just for the show and travel home under their own steam or by coach. Others will be locals who often go out on the town and make a night of it.

How much of a hit has the local economy taken? How many visitors has the Borough lost?

The last figures ‘guesstimated’ for The Futurist show that during an average six months (Sept 2011 to Feb 2012), the theatre sold around 40,000 tickets. We’re six months into a very slack year and it is looking extremely likely that the situation with The Futurist has caused the loss of 60,000 visitors to the Borough. If those visitors all spent £80 per head in total, then we’ve lost £4.8m from the local economy.

So, who is to blame for the hit taken by the local economy? Officers at the Scarborough Borough Council (SBC), which owns the theatre, whisper in quiet corners and blame the operator for the lack of acts. The Council’s contract renewal arrangements with the operator, Barrie Stead, have been negotiated a year at a time for the last decade.

In the view of all local theatre experts, the annual contract negotiation by SBC is the main reason why, for the last five years, the theatre has not done anything like as well as it could have done.

What is the loss to the local economy over those five years?

Again, it will be in the millions. This year, The Futurist operator had the opportunity to book the War Horse tour for the venue in 2014, but had to turn it down because he does not know what is going to happen between himself, the theatre and the Council.

The situation in the entertainment industry has also changed in the last couple of years. Once upon a time, an act would be booked and take a percentage of the ticket price. Today, acts demand their fee up front, which is termed a ‘minimum fee guarantee’. This puts the onus on the theatre operator to fill the venue and maximise their returns.

So who pays the ‘minimum fee guarantee’?

In the case of the Whitby Pavilion and the Scarborough Spa, Sheffield International Venues Ltd pay the fee. For The Futurist Theatre, the operator, Barry Stead, would likely pay the fee. But would he have £25k sat around to book an A-list comedian for example?

Then we have the Scarborough Open Air Theatre. The venue is owned and operated by SBC. Currently, SBC is itself underwriting minimum fee guarantees for any acts that perform there. But they’ve refused to give money to the operator of The Futurist theatre to underwrite acts, which is in turn damaging the local economy.

The long-running saga over The Futurist Theatre in Scarborough has taken another turn, with regional press reports quoting the SBC mantra that the theatre is ‘beyond repair’. The building has barely seen anything but emergency repairs for over ten years, so the mounting cost of neglect by SBC is anything but a surprise.

The ‘official line’ from SBC during the 2012 Town Hall / Futurist consultation was that it would cost £2.2million to put the Futurist right. Figures were obtained from SBC to see exactly what the £2.2million of work entailed. Expert eyes glanced at the line items and pointed out that some line items were completed, whilst others could be done cheaper.

A revised figure of around £1.5million was thought to be nearer the mark, but SBC didn’t and wouldn’t acknowledge that it could be completed far more cheaply than their original figure.

This year, the ‘official line’ from SBC is that it will cost £7million to put The Futurist right. Yes, you read it right, in the space of a year the figure for renovating the Futurist has increased by nearly £5million, according to the Council at least.

SBC were FOI’d for the detail surrounding the £7million Futurist renovation figure. It was intended that some expert eyes would again glance at the line items to see how this year’s figure of £7million was constituted.

It is at this point in the article that an examination of the £7million would take place, but given that SBC have IGNORED the FOI request, as they do many others, that can’t take place. It appears that SBC just made up the figure of £7million and hoped the public would be naïve enough to swallow it. Comments made on the Scarborough News website suggest people are far more switched on than SBC give them credit for.

The Scarborough Borough Council Constitution states the objectives of the Council. The top priority of the Council is ‘Safe and Healthy’; to deliver ‘Safer communities’, ‘Good quality, affordable housing for all’ and ‘Protecting and improving health for all’.

The second priority is ‘Prosperous’; to deliver a ‘Strong and diverse economy’, ‘Sustainable tourism’ and lastly ‘Financial inclusion’.

The latest Futurist report commissioned by SBC and prepared by their selected consultants makes for interesting reading. The report is a good deal less biased than previous reports and was passed by the SBC Cabinet at their latest meeting.

The report correctly identifies that a gap in the market would be created if The Futurist was demolished. The report suggests that people wishing to watch large-scale musicals, ballet and opera should attend other venues at York, Leeds, Hull and Bridlington instead!

The report further suggests that The Grand Hall at the Scarborough Spa (capacity 700 – 1,600) would replace The Futurist (capacity 2,100) for rock/pop concerts and big name comedy acts. From half of the seats in the Spa Grand Hall you cannot fully see the stage. Who wants to pay for a ticket to see a big name act when your view is partially obscured? SBC obviously think there is a big market for it, but poor ticket sales by Sheffield International Venues suggest otherwise.

The SBC plan glimpsed so far suggests they want to knock down the major tourist attraction and replace it with a hotel and a mix of retail and residential property. Hilariously, SBC claim their economy-destroying actions will actually diversify the local economy!

The acceptance of the report casts major doubt on the ability of SBC Senior Officers, whose job it is to advise from a position of knowledge and expertise, and the Cabinet who make decisions, to take the resort forward.

If you were a Council Officer or Councillor, charged with working for the benefit of the local community within an Authority that has a portfolio for tourism, would you be entering into long term plans which would restrict your tourism offer, turn visitors away and intentionally damage the local economy in these times of austerity?

The actions of Senior SBC Officers and the Cabinet have allowed a situation to evolve that contradicts the SBC Constitution entirely. Their collective arrogance, their inability to move major projects along, their reticence to admit they’ve made the wrong choice and change path will only lead to more damage to the local economy.