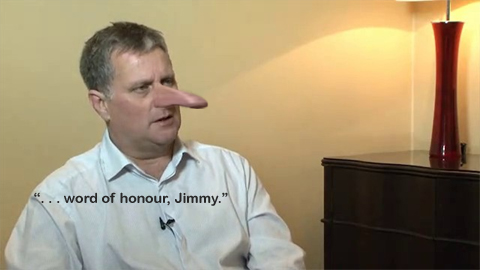 The Scarborough Business Park is a dusty, virtually deserted industrial estate on the outskirts of Eastfield, with little in the way of public transportation links. Since the Council-owned business park was built a number of years ago, it has remained virtually empty. Laughably, it won an award at the ‘Government Business Awards’ for ‘Sound business judgement and operational expertise’. Presumably the OGC logo was in abundance at the awards ceremony. Just tilt your head to left…

Anyway, after years of planning by Council Officers and at the very last minute, the SBC Cabinet recommended to full Council that the proposed move to Prospect House should not proceed and the Town Hall should remain on St. Nicholas Street.

Council Leader Councillor Tom Fox said of the last minute u-turn that the decision not to proceed was:

Councillor Fox and the rest of the SBC Cabinet apparently all had road to Damascus moments with Fox claiming:

Meanwhile, elsewhere in Borough, in a hive of scum and villainy, I listened to the tale of what actually occurred behind the scenes over a couple of pints. At the outset of planning the Town Hall move, the Council consulted its own Planning Officers with regard to the move. Apparently, the Officers said that the move to Prospect House was a virtual non-starter. The report was fed up the food-chain at the Council.

Months, perhaps years passed, planning for the proposed Town Hall move progressed at a pace, at the behest of Senior Council Councillors and Officers who, presumably, had read the advice from their own Planning Officers. In late May 2012, five former-Senior Council Planning Officers spoke out against the move to Prospect House.

During Spring 2012, there were plenty of rumours floating around the Borough that the proposed move would not be legal. It is presumed that this was the catalyst for SBC seeking further legal advice regarding the move. SBC engaged East Riding of Yorkshire Council (ERYC) for planning advice, who in turn engaged Gavin Collett QC for the appropriate legal advice.

An inside source at the Council claimed the legal advice received via ERYC was actually the catalyst for halting the proposed Town Hall move to Dunslow Road. It seems our Council didn’t have a change of heart after all, and neither were they strongly swayed by the public. It seems we council taxpayers were told a porky.

So, armed with that information, on the 24th August 2012, I decided to ask for a copy of the legal advice via an FOI request from SBC. Despite many reminders, SBC ignored the request until I complained to the Information Commissioners Office (ICO). The ICO admonished SBC and gave them a black mark.

Nearly a year after I’d made the initial request, and after a slap from the ICO, SBC very thoughtfully replied to the FOI request with a very heavily redacted copy of the legal advice. Try not to laugh too much as you read what is left of it! [also copied at the foot of this page].

I’ve had some further contact with the ICO recently. The ICO has determined that Legal Professional Privilege (LPP), the confidentiality that exists between a legal professional and their client, in this circumstance, outweighs the need to disclose information in the public interest. Apparently LPP is of more importance than knowing your Local Authority has lied to you!

The reason SBC gave for the heavy redaction of legal advice pertaining to the ‘Re-location of Scarborough Borough Council Offices to Prospect House, Seamer’ was that the advice could well be of use in the future.

“As you are aware, it was determined by the Full Council that there would be no need for an application to be made because the Town Hall would not be moving to the site identified at that time”.

“This does not mean that the Council are looking or intend to look to relocate at this time”.

Disappointingly, it doesn’t look as if we’ll get to see that legal advice in the near future.

We’re not the only ones who have been denied that information. A number of SBC Councillors read my articles about the failed Town Hall move and have asked Council Officers if they can view the legal advice themselves to establish if the articles are accurate. Those Councillors were denied access by Council Officers too!

Interestingly, the Chief Executive Officer of Scarborough Borough Council, Jim Dillon, has been heard to say that all the claims made on the site are false.

If the Council are really not looking nor intending to relocate anytime in the near future, then there is no reason not to reveal the content of the legal advice. The Council could let the elected members who’ve requested sight of the documentation have a good read, but there seems little in the way of trust between elected members and Council Officers.

Of course, if the content of that legal advice shows that the Council has not told the whole truth about their reasons for halting the proposed move to Prospect House, then that would be another reason for the Council to keep it under wraps.

Perhaps my source regarding the legal advice is wrong and has led many people up the garden path. Surely the Council wouldn’t pass up the opportunity to fire a broadside and quosh the rumours? They could start to prove that all claims made by this site are indeed false. Much humble pie I would have to eat. Better start saving up for the gallons of custard I’ll need to buy, just in case…