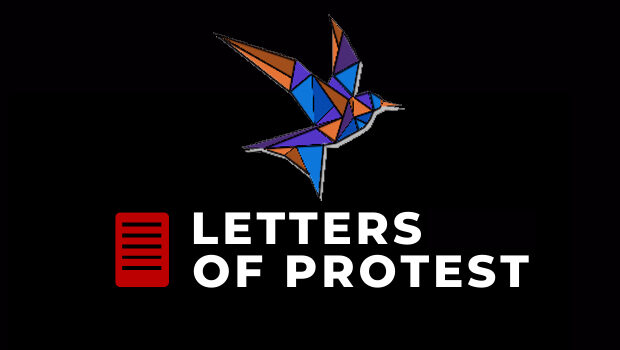 In the interests of “openness and transparency”, it is important that, ahead of the Vote, Councillors should be aware that the wider public is fully informed about the strength and depth of informed opinion stacking up against Yorkshire Coast BID Ltd.

In the interests of balanced reporting, I have included a belated and rather sorry plea by YCBID Chair Mr Clive ROWE-EVANS which one suspects will fall upon ears already deafened by his silence thus far.

Following ratification by SBC’s Audit Committee last week, the following Recommendations of the Working Group’s report were accepted and approved by the committee:

It should be noted that the first three of these Recommendations cannot be binding on the new Unitary Council – they are merely polite requests. Only the fourth falls within the gift of SBC. None of the Recommendations suffices to terminate the BID. Thus, business proprietors – including former Directors of Yorkshire Coast BID Ltd – continue to press for a ‘final solution’.

Examining the latest YCBID Financial Overview figures, it is easy to make a case for the BID to be abandoned on grounds of representing abysmal Value for Money (VFM), with only £1.4M spent on ‘projects’ (puppets, puffins, tour buses, etc) and a sum equal to almost half of that (£0.7M) on their own continued existence! Small wonder that the BID company declined the option of external auditing. 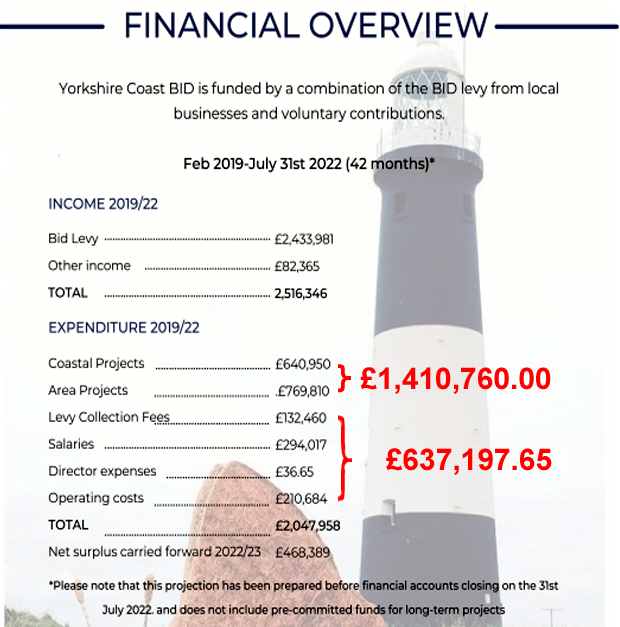 Readers are invited to read and digest the following correspondence – letters from prominent business leaders (including former BID Directors) who have spoken out against the BID. SBC CEO Mike GREENE will be leaving a Council that has not merely alienated the community but drawn its total hostility.

Councillors will no doubt be aware that there is likely to be a Recorded Vote on Thursday. Even if they are so blasé (given that they will not be facing elections next May) – so blasé as to consider themselves immune to electoral wrath, one might expect them to be confident of escaping politically unscathed.

I cannot vouch for the authenticity of the following image (purportedly a cropped photo of a poster in a Scarborough shop window), sent to me by a former Councillor: 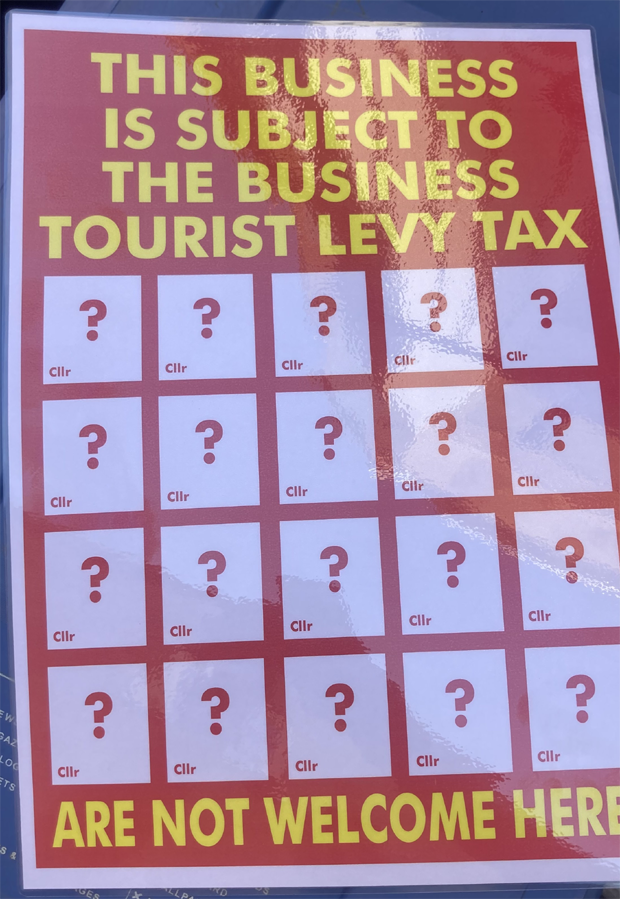 If it is genuine – and I emphasise “if” – then the implication seems to be that Councillors who turn their backs on businesses will be free to reflect on their treachery – at their leisure.

“The businesses are revolting!”

In one sense, I might expect the high-handed BID supremo to agree.

I note with interest the forthcoming meeting of the full Council and the motion that is to be considered.

You will be aware that I was a Director of the BID Company, but resigned in June 2020. As a Director charged with running the BID for the benefit of the Businesses I was in a very privileged position to use the vehicle to provide benefit to the local traders. That was the reason I was involved in the organisation. However, my views changed during the period I was on the Board for the following reasons:

1.​ I could not accept the decision to continue to charge BID Levy during the pandemic, particularly when the Government had removed the requirement to pay business rates to those businesses that were most severely impacted – the leisure and hospitality sector – the very same businesses that were subject to the Levy.

2.​ To make matters worse, the BID Company offered no practical support to the Levy payers.

3.​ After the investigation into the ballot process I learned that the Councils (ERYC and SBC) block votes swung the ballot. This combined with the fact that I was summoned to a meeting by an SBC Officer during the BID ballot process and informed how others had voted in an attempt to sway me to vote for the BID made me realisehow this was being pushed through by our Council, not the businesses.

4.​ The Board became heavily tipped with Council officers rather than business owners.

5.​ It was clear that a large number of businesses were extremely unhappy with the BID and significant time was being wasted trying to fight the challenges from the Yorkshire Coast Levy Payers Association, to the detriment of engaging with the concerns of businesses who we were supposed to support.

6.​ There was a very clear lack of transparency in the decision making process and secrecy over the accounts. For an organisation that should be proud of what it was doing this was unacceptable.

For the above reasons my position was untenable and I had to resign.  Once I had resigned I ceased paying the Levy in protest. I have been summonsed to Court for non-payment.

In summary, the idea of a BID works in principle, however the Yorkshire Coast BID has failed. The main reason for this is the area of operation is far too big. The BID would have been successful if it was focused on a much smaller area of businesses that wanted to join together for their mutual benefit. In a way we already have this with for example the South Bay Traders Association. The Yorkshire Coast BID was not wanted by the businesses. It was forced through by a Council that perceived an opportunity to save some costs from its tight budgets. It was a huge mistake. This Council must take responsibility for that and do whatever it takes to put matters right.

I am happy for you to share this letter with other members of the Council, if you feel it would be a worthwhile contribution. 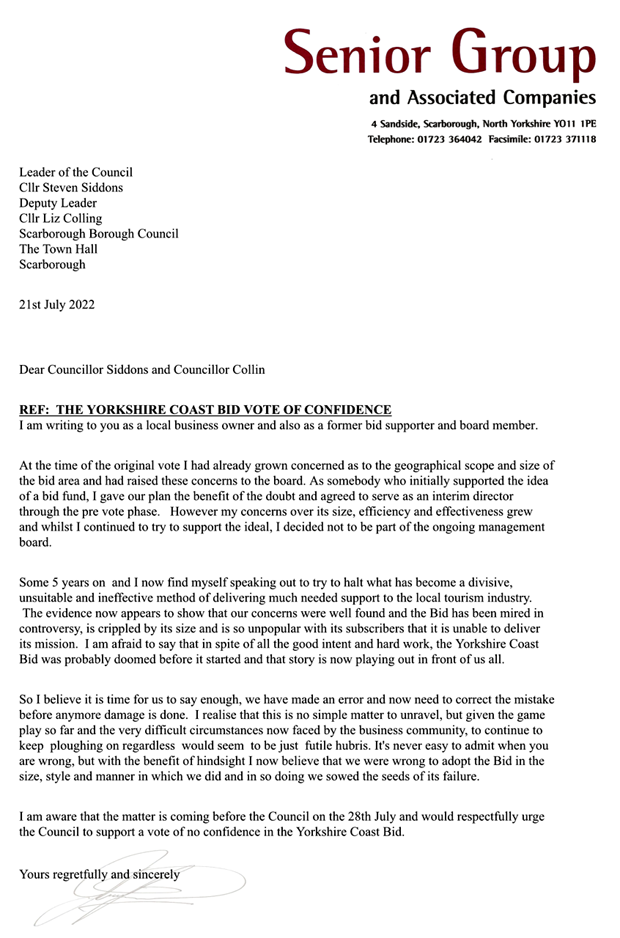 As you may know, I was always sceptical about the BID. I thought it was extra Business Rates – by the back door.

Even though my businesses pay more than enough in taxes, more than a heavy burden, I joined the BID company to make sure everything was above board and that Whitby got its fair share of whatever cash became available.

The fact is, I was never happy about being a Director. I found the board meetings very slow paced. There was no innovation or direction and the project ideas were uninspiring.

I was never intending staying on the Board for any length of time. I found it too bureacratic and stodgy.

I finally left when the pandemic started and I felt the pressure on my own business and that demanded my full attention. And I synpathised with other businesses when they complained to me about getting no help or support from the BID.

For me, the BID was never business-led. It was driven by Scarborough Borough Council, with much conflict of interests with NYCC and Highways. No-one could agree on any meaningful projects.

I was also unhappy about the levy charge over the lockdown period, when Business Rates were cancelled.

I was disappointed when, after all the effort delivering the Giant Sculptures in 2019, none appeared in Scarborough, Whitby, Filey or Bridlington because they could not obtain site approval from Highways. To date, only one site has materialised, out of the way, off the beaten path, down near Spurn Point, of all places. SBC, NYCC and Highways have been obstructive, dictating the direction of the BID – not businesses, as it was originally portrayed.

I still have yet to see any tourism enhancement or development from the BID company. I ask around and I see that people on the coast want nothing more to do with the BID. It is an extra taxation burden with nothing to show for it. I really think it’s time to write it off as a failed experiment. Businesses know for themselves how to attract business and the BID has given them nothing they need.

Please find attached letters from Nikolas and Becky Shaw, Directors of Nikolas Shaw Ltd, Nobles Seaton Carew and A&G Amusements, regarding the upcoming Vote of Confidence in the Yorkshire Coast Bid.  The attachment includes a letter from each of the companies.

Date: 26 July 2022 at 09:51:23 BST
To: “Cllr.Steve Siddons” <Cllr.Steve.Siddons@scarborough.gov.uk>
Cc: All Cllrs; Robert Goodwill MP, Alex Wood – Yorkshire Post, Richard Edwards – BBC Radio, Hero Sumner – YCLPA
Subject: EGM YORKSHIRE COAST BID
Dear Mr Siddons
May I take this opportunity to acknowledge and  thank the council as a whole across all administrations for the way it handles the extremely sensitive subject of CAR PARKING in the Borough. Your enforcement officers are fair, the penalty notices are not unreasonable and the appeals process is just to our residents and visitors. Thank you.
So what on earth has parking to do with the EGM you may ask yourself?
Let me explain. Yorkshire Coast Bid is the parking equivalent of a cowboy clamping firm that is not contactable and hides behind an anonymous office address refusing to face it’s customers or defend its operating methods  A private company YOU employed as its agent to carry out services on behalf of this council, not dissimilar to parking enforcement other councils sub-contract out.
A private company masquerading as a firm to help tourism with misleading signage and reassurances with glossy promises when this all began.
Why will you not afford the same equitable treatment to the businesses you represent, the majority of Business owners that YOU have served summons on are residents and voters who will remember this for a long long time, long after the re-ballot in 2 years as our Business Poll Tax?
Here is your chance to show you will not support tyranny. Now is the time to bring this unwanted BID to an end.
This Council acted in haste, now we are all repenting at YCB’s leisure.
This will be your legacy. Make it a good one.
James Corrigan
YCBID Response
LETTER FROM CHAIR
Yorkshire Coast Business Improvement District
Dear Councillor,
I understand that the Yorkshire Coast Business Improvement District is going to be discussed at a full Council meeting on 28th July.
I believe that it would be very useful for you to have a full understanding of the work and projects that have been developed and supported by the YCBID over the last few years, as well as clarity on some of the speculation that has been doing the rounds in recent months.
You can view the annual insert which is being sent to all levy payers in the next few days.
This outlines the extent of the funding (around half a million pounds) that has been provided by the YCBID and invested in the SBC area, despite the complications with COVID.
We have received some comments suggesting that The YCBID was not sympathetic with the circumstances that arose for businesses due to the Covid pandemic. YCBID was in fact the only BID in the country to extend the levy repayment by 12 months to support businesses suffering the effects of Covid-19.  I have enclosed evidence of our attempts to implement levy reliefs of up to 100% in year two on the below links:
20.3.2019
23.3.2020
16.6.2020
21.7.2020
31.7.2020

We would please urge you to read the letters to the Executive of SBC, The Secretary of State, and our Member of Parliament. The response from the Minister in August 2020 can also be found below:

The following letter from our professional body, British BIDs, sent to the Secretary of State is also worth reading with regards to this matter.

Some further areas of clarity can also be found in the letter I sent to you in August 2020.

Should you have any further queries please do not hesitate to contact me personally. 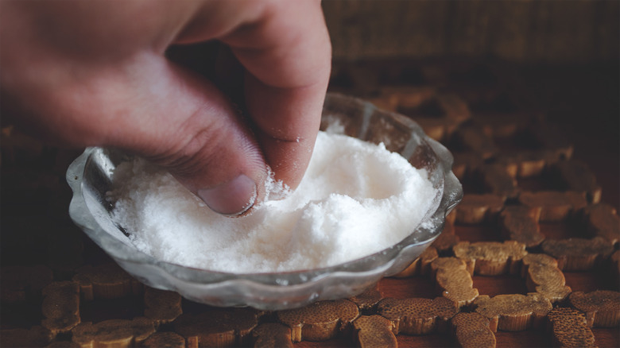