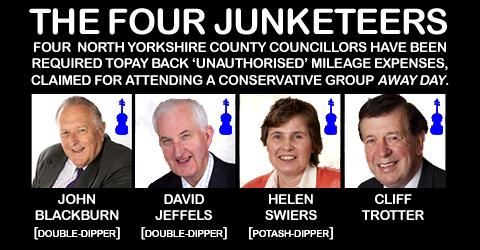 A recent article highlighted a mileage repayment from County Councillor David Jeffels (Seamer & Derwent Valley Ward). It was established that Cllr Jeffels attended a ‘Conservative Away Day’ meeting on the 17th October 2011 at the ‘Leeming Bar Hotel’ and claimed traveling costs for attending that non-Council meeting.

An email querying the payment of mileage for the ‘Conservative Away Day’ meeting to North Yorkshire County Council (NYCC) resulted with the County Council indicating that they would be seeking to recoup a mileage repayment from Cllr Jeffels.

“So far as the Away Day at the Leeming Bar Hotel is concerned Councillor Jeffels points out that there was no indication at that time that such meetings would not qualify for mileage claims.  However, as the position has now been clarified those expenses are to be recouped.”

The initial FOI request asked for the names of the other Conservative Councillors, but NYCC decided to withhold this information citing section 40(2) of the Freedom of Information Act to deny access to information that is obviously in the public interest.

I expected this FOI request to go all the way to the Information Commissioners Office, but NYCC reviewed my request and decided to disclose the information requested.

We can now reveal that the NYCC County Councillors joining County Councillor David Jeffels (Seamer & Derwent Valley Ward) in repaying mileage claimed after attending a ‘Conservative Party Away Day’ on 17th October 2011 at the ‘Leeming Bar Hotel’ are: