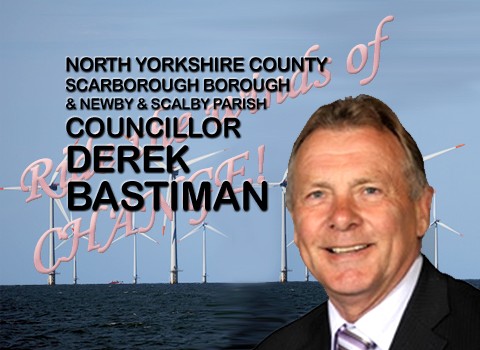 On Tuesday 10th September 2013, the Coast & Moors Area Committee of North Yorkshire County Council (NYCC) convened at Sneaton Castle to debate and resolve the highly contentious matter of the on-street Zonal Parking proposals that form an integral part of the Whitby Park-&-Ride project. This article will not concern itself with the merits of the proposals (there are none), nor will it concern itself with the legality of the Meeting and the Resolution that was passed (and has since survived one sham challenge at the NYCC Transport & Environment Overview & Scrutiny Committee at County Hall on Tuesday 24th September 2013).

I shall be reporting instead on the conduct of the Chair of the Sneaton Castle meeting (and elsewhere) of Councillor Derek BASTIMAN – category 2 ‘double-dipper’ (please follow the link and read the comments; they are most instructive). 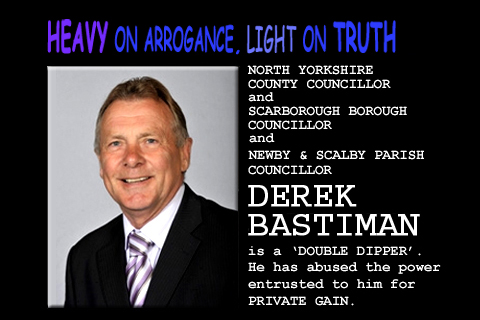 I must have spoken with twenty or thirty people who attended the meeting. Without exception, they were emphatic in their condemnation of County Councillor Derek BASTIMAN’s haughty and autocratic style of Chairship, which rankled far more than his inexplicable decision to use his second vote – the Chair’s casting vote – to rubber-stamp a radical departure from the status quo – in disregard of accepted protocols e.g. Speaker Denison’s Rule – i.e. to vote to allow further discussion, if this is possible, and otherwise to vote against the proposal concerned.

On 20th September 2013, a member of the public (not me!) emailed NYCC CEO Richard FLINTON to lodge a Formal Complaint in respect of County Councillor Derek BASTIMAN’s autocratic and anti-democratic conduct at the 10th September Sneaton Castle meeting. In accordance with expectations – though contrary to NYCC regulations – Richard FLINTON responded, on 2nd October 2013, with an autocratic and anti-democratic decision of his own:

However, on 8th October 2013, Richard FLINTON performed an extraordinary volte-face in the face of mounting criticism of County Councillor Derek BASTIMAN, informing the earlier complainant that:

Note the use of the passive voice – “it has been decided”. Decided by whom? Was it you, Richard FLINTON, taking the regs into your own hands again? No doubt a little more lime in your whitewash will serve the purpose in hand. 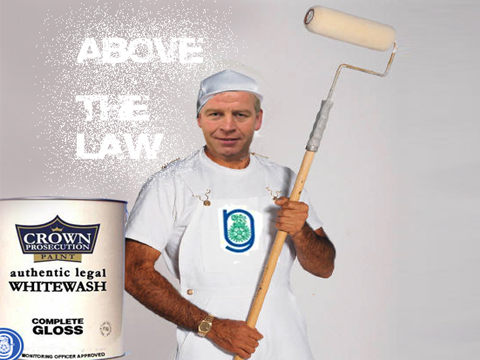 Meanwhile, On Wednesday 11th September 2013 – the twelfth anniversary of the attack on the Twin Towers – Newby & Scalby Parish Council (N&SPC) held one of its monthly Meetings, where County Councillor Derek BASTIMAN sits as a mere Parish Councillor.

According to the Agenda, published on the Council website, the Meeting was scheduled to run begin at 7:00pm at the Newby & Scalby Community Hall, running concurrently with the Ladies Zumba Dance Class, elsewhere in the same building.

According to independent witnesses, the Meeting was already in progress when they arrived at between 6:53pm and 6:57pm. It is unlawful to open a meeting ahead of its advertised start time.

Amongst the public was one who was there for a purpose. He wished to speak in the Council’s Public Forum (Agenda Item 4). His name is Nick HENDERSON.

Nick HENDERSON rose to speak at exactly 7:00pm, not wishing to find his question to the Council ruled out on the grounds that the Meeting was not lawfully convened – under the terms of the Public Bodies (Admission to Meetings) Act 1960 and other legislation, it is not permitted to open meetings ahead of the time published on the Agenda, in the present case 7:00pm.

Knowing that his question was of considerable importance and open to intense scrutiny – relating as it does to the issues covered in my recent article, “The Protection Racket” – Nick HENDERSON began by offering a print-out of his question to the Clerk in order that the Minutes of the Meeting would accurately record his form of words. This print-out was passed along the line of Councillors around to the Clerk.

Meanwhile, Nick HENDERSON addressed his question to the Chair of the Council – Councillor Gill KENDALL. Here it is:

Nick HENDERSON may (or may not) have been referring to Councillor T.W. ‘Bill’ MILLER and his spouse Councillor Jane KENYON (SBC – and formerly a NYCC Councillor, for ten years Chair of the North Yorkshire Police Authority) who remain the subjects of a number of allegations regarding a whole series frauds and forgeries (covering three decades), presently being disregarded by the North Yorkshire Police (NYP).

Be that as it may; Nick HENDERSON’s question was greeted by 18 seconds of stony silence. Both the Chair and the Clerk appeared dumb-founded. Nobody spoke – until, that is, Councillor Derek BASTIMAN (who did not have the right to speak for the Chair, except at the specific invitation from the Chair – which the audio recording shows did not happen), stepped into the breach with the following response:

Clearly, Councillor Derek BASTIMAN feels himself to be unconstrained by the requirements of Council protocol. He likes to take charge. He is ‘The Man’.

On Friday 13th September 2013, ‘The Man’ featured in a BBC Radio York interview, this time in his rôle as a Borough Councillor and Portfolio Holder at SBC, covering inter alia the bonanza prospects in store for Scarborough contingent upon the success of the much-vaunted Dogger Bank wind-farm proposals.

Given Councillor Derek BASTIMAN’s Portfolio, it is not entirely clear why he should have been the man to tell the BBC that:

That interview should more properly have been conducted with (formerly, County; presently, Borough) Councillor Mike COCKERILL, whose Cabinet Portfolio is for Harbours, Assets and Coastal & Flood Protection.

In any event, Councillor Derek BASTIMAN contrived to avoid any mention of the three recent cases of vessels running aground at Scarborough’s harbour mouth; the passenger vessel Coronia (owned by Robert GOODWILL MP [Con]) ran aground on 25th August 2013 (“Abandon Ship!” was called and adults and children were photographed in the water without the regulation life-jackets); and just a few days later, two private yachts ran aground in Scarborough harbour mouth – all of which rather gives the lie to County Councillor Derek BASTIMAN’s boasts to the BBC.

On 10th October 2013, I lodged a Formal Complaint against Councillor Derek BASTIMAN.

On 13th October 2013, I was surprised to learn that yet another member of the public had quite independently lodged an essentially similar Formal Complaint against Councillor Derek BASTIMAN, this time concerning a quite separate (but equally false) statement made by the latter at a Town Hall meeting on 9th October 2013, relating to misrepresented (i.e. false) fishing catch figures. This Formal Complaint also asserts that Councillor Derek BASTIMAN stated elsewhere in his BBC Radio York interview: 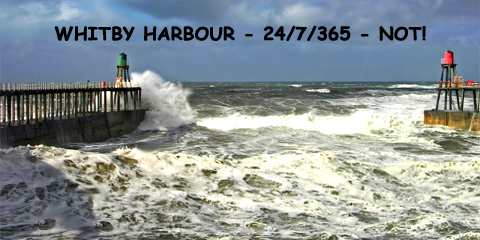 Though Councillor Derek BASTIMAN is apparently ever-ready to place his fantasies on the public record, the veracity of his utterances cannot be taken on trust – or even without a pinch of the white stuff.

And I now learn that Nick HENDERSON is pursuing a Formal Complaint against Derek BASTIMAN in regard to his Newby & Scalby intervention.

And one may assume that a Formal Complaint will be forthcoming presently in respect of the infamous “You can f*ck off for a start” outburst at the count for the May 2013 Elections at the Scarborough Spa on 3rd May 2103.

Nevertheless, readers who persist in the belief that Scarborough Borough Council is in the hands of honourable, respectful, competent and trustworthy pillars of society will no doubt dismiss this article out of hand.

So be it. Let them continue with their heads in the sand – or perhaps that should read “in The Sands”.