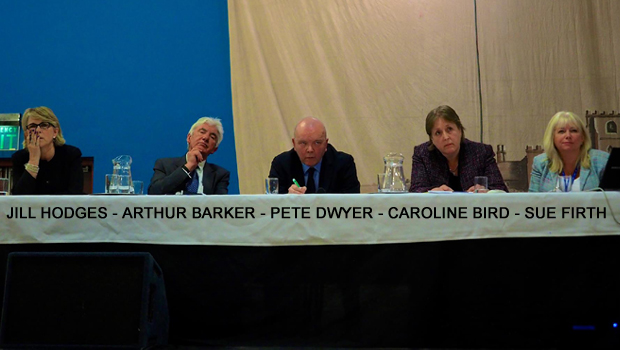 The second roll-out of the Pete DWYER road show came, despite a tremendous turn-out, as something of an anti-climax following Monday evening’s vibrant debate.

Lessons had clearly been learned about how to stage-manage an event that, on Monday, had allowed (at least from the NYCC perspective) too much latitude to the more articulate voices of opposition.

Quick to learn, Executive County Councillor Arthur BARKER set the tone from before the kick-off, telling former Eskdale Chair of Governors Mike WARD that no member of the public who had spoken on the Monday would be allowed to address the panel again.

Before the tedium of the slide-show was released upon us, we were treated to two spirited musical performances by Eskdale youngsters, the second led by former Eskdale pupil Alistair GRIFFIN. Both were greeted by rousing applause and an almost unanimous standing ovation, eschewed only by the Caedmon Headteacher Keith PRYTHERCH and his entourage of acolytes, minions and lickspittles, who remained stone-faced in their seats while Golden Boy tinkered with his mobile.

If Pete DWYER, at the beginning of his commentary slide-show commentary, seemed, momentarily, to have adopted a less strident rhetoric, he soon reverted to type. Frequent references to “this consultation” and “this genuine consultation” could not long disguise the obduracy that had characterised Monday’s performance. The inevitable references to “must be financially stable” and “must not jeopardise sixth form provision” left no doubt as to the principle element of the LEA strategy – money. Pete DWYER “absolutely respected” the Eskdalers views, “However . . .”.

That “However . . . “ said it all for me. What he really meant was that they would be going ahead with the closure – whatever.

Caroline BIRD’s latest performance did not stray far from her previous effort. If she was heckled less, it appeared to me that this was because an unspoken accord had been reached amongst the audience to allow Caroline to simply get it over with, so that we could move on to the more pressing business of the evening – the Q & A.

Again, Arthur BARKER attempted to confuse the issue by insisting on hearing two questions at a time; this time, sharing the responses between Pete DWYER and Caroline BIRD with the occasional non sequitur from Jill HODGES, introduced to slow the game. Informationally, she added nothing of value.

Despite Arthur BARKER’s insistence on singling out a disproportionat number of children to speak, there were some excellent statements/questions from members of the teaching profession – notably Mrs Caroline PEARSON, Mrs Zoë HURWORTH (whose cards will now have been marked) and former Headteacher Tim LANDERS.

Dr John BROWN, who had that morning addressed the Scarborough Borough Council Cabinet to some effect, also raised some salient points. But direct answers were few and far between.

The underlying obstacle to constructive dialogue is now very clear.

The LEA is concerned with the bigger picture – the corporate strategy.

The Eskdale teachers, parents and kids – as well as the Whitby public – are concerned with young lives, in and out of the class-room.

The LEA is concerned with indicants of academic adequacy and sustainable costing projections. Unquestioning adherence to the so-called ‘economy of scale’.

The Eskdalers are concerned with much broader aspects of childhood – integration, teamwork, relationships, and (dare I say it?) fun – a sense of belonging, of community, of life not in disregard of examination results, but beyond them. Real life.

The debate (though it was not worthy of that name) was non-communicative precisely because the LEA was selling justification – cold, hard, impersonal facts. Whereas the Eskdalers were holding out for more humanistic values and aspirations; less quantifiable, less susceptible to statistical evaluation, perhaps – but more ‘real’ in terms of life’s wider challenges. Their broader vision was lost on the statisticians from County Hall.

The two sides were simply talking ‘through’ each other.

As I mingled with parents and teachers when the meeting closed, I heard much talk of ‘a done deal’. I tend to agree; I hope I am wrong. But I also heard much talk of continuing the fight – a Call-in? A legal challenge? A Judicial Review? But, by and large, the atmosphere was redolent of futility, sadness and loss. The writing is on the wall for Eskdale and that writing says “The Whitby School – or you are on your own”. No alternative in Whitby. No transport support. No escape for the bullied and abused.

Those kids will all go to the same school – “The Whitby School” – a school that has yet to be judged (either by OFSTED or by the court of public opinion) and which, before very long, will renew its Academy application, probably successfully (in accordance with the government’s edict), and the ‘battle’ for Eskdale will be consigned to the list of many abject failures of democratic process that has characterised and chronicled the history of Whitby under the dominating Tory Councils.

As to the LEA’s duty of care to the kids who are being bullied or sexually exploited – well, that may come back to haunt them.

I hope that you will read it here on the Enquirer. Nowhere else will the full story be told. 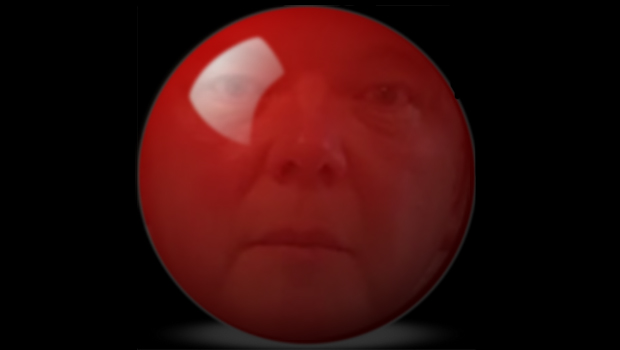