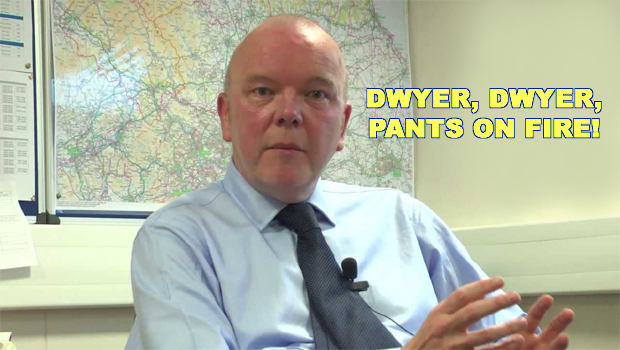 Arriving a little early at last night’s “consultation” meeting regarding the future of Eskdale School, I was delighted to find an opportunity to say hello to a man with whom I have previously engaged, seldom agreed (without ever coming to harsh words) and never had reason to call for a fool – County Councillor Arthur BARKER the Executive Member for Children & Young Peoples’ Services at North Yorkshire County Council, our Local Education Authority. After exchanging the customary enquiries as to our mutual health and wellbeing, I took the opportunity to button-hole Arthur on a fundamental point that has not yet received much attention at all:

It is, apparently, an “engagement with the public”. The thought was to occur to me, not so very far into the meeting, that, in this case, one should understand the word “engagement” as it appears in the following dictionary definition – Item 6 (i.e. the sense in which Bernard MONTGOMERY took part in an “engagement” with Erwin ROMMEL):

en•gage•ment
(ĕn-gāj′mənt)
n.
1.
a. The action of engaging or the state of being engaged: engagement in diplomacy.
b. The condition of being in gear: engagement of the transmission.
2.
a. A mutual promise to get married.
b. The period during which this promise is kept: a long engagement.
3. A pledge or obligation: meeting one’s engagements.
4. A promise or agreement to be at a particular place at a particular time: a dinner engagement.
5.
a. Employment, especially for a specified time: his engagement with the firm.
b. A specific, often limited, period of employment: a speaking engagement.
6. A hostile encounter; a battle.

I made a point of asking Arthur to be sure to remember to make the true nature of the “engagement” known to the public. He was clearly not enthused by the prospect; I had to press the point three times.

In the event, Arthur used the word “consultation” many times – though not as many as his Corporate Director: Children & Young Peoples’ Services, the eponymous Pete DWYER, without ever explaining that this was not a true consultation at all.

The C-word (“Consultation”) was also aired a large number of times by Ms Caroline BIRD, Strategic Development & Commissioning Manager, who on one occasion danced a step too far, referring to a “statutory consultation”.

Let us be quite clear – despite Pete DWYER’s determination to convince us that he was here to listen; that the meeting was convened as an open embrace of the public view, the opposite was transparently clear from the very outset. He even unleashed a classic Freudian slip – speaking of “when” where the script called for an “if”.

Apart from a single illustration at the beginning of his slide-show, a visibly nervous Pete DWYER made his laboured procession through a series of screens full of text. The message was relentless: there is no option other than to close Eskdale School. It was not a matter of money. Rather, DWYER would have us believe, it was simply a matter of coping with cuts. (Divorce those two concepts from one another if you can. I cannot).

It was more, he insisted, a matter of providing excellence of education – not least, excellence of sixth form education – for the children of Whitby. Quite how that relates to his golfing chum’s ‘leaking’ sixth form was not made clear. It is not, he protested, a done deal.

And nothing should be read into the fact that the new school formed by the amalgamation of Eskdale School and Caedmon Community College had already been endowed with a name. I forget what it was. Or rather is. Or will be. I remember only that it failed to inspire.

Peter DWYER protested (much too much) that his remarks to the Whitby Gazette regarding the £1M losses associated with retaining Eskdale jeopardising the very existence of sixth form education in Whitby was not, emphatically not scaremongering. But no explanation was forthcoming regarding what would become of those savings if (or when) by Caedmon were to move, in due, course, to Academy status (at the last count, the application was officially “on hold” – though there is no such thing as an Academy application “on hold”; it goes forward to acceptance (or rejection) or is withdrawn. But a withdrawal does not preclude a renewed application – which I confidently expect

In short, every word of Pete DWYER’s presentation rang false – at least to my critical ear.

Happy to escape, Pete DWYER was soon followed by the lady in red – Caroline BIRD. There was something disturbingly reminiscent of Margaret THATCHER about Caroline’s blend of imperturbable composure and regal condescension, both of which she deployed effectively when challenged on the “statutory consultation” slip. She simply turned back to her screen full of Councilese and ploughed forth into impenetrable depths of tedium, oblivious to the frequent calls to wrap it up and proceed directly to the Question & Answer phase of the two hour meeting (an hour of which was lost to this exercise in single-mindedness).

It would be churlish to single out any of the many who spoke passionately and articulately about the their heartfelt need for Eskdale School.

It would be unfair to leave out any of the many who asked penetrating questions – in vain.

I will try to cover some their points, below.

I take issue with Arthur BARKER over the way in which he conducted the Q & A. He began by insisting on a lop-sided “two questions gets one answer” basis, though this floundered in the face of speakers who asked no question but stated a telling point of view. Arthur’s system then broke down when those who asked clear questions earlier found themselves left with no other device but to continue shouting out their questions, without benefit of a microphone, as the panellists took turns to ‘talk out’ the peripheral aspects of each subject without ever approaching a direct answer.

Poor Arthur tried his very best to defend his beleaguered Officers; with little success. The public was left with the impression that no question could expect a straight answer, no statement could expect a fair hearing, no better idea had a hope in hell. The prevailing atmosphere was one of acute frustration.

I was moved to speak myself towards the close of the meeting. I do not recall my precise words and I have neither the time nor the inclination to search through my voice recorder. I recall only that I told the panel that I had seldom seen such an exhibition of obduracy, intransigence and downright self-righteousness and that I was relieved that this was not a formal consultation because, if such had been the case, it was fatally flawed by the intervention of Caedmon Senior Management – who have a direct personal pecuniary gain to be made from the closure of Eskdale School (since their salaries are directly linked to an enhanced Caedmon pupil roll) – in applying utterly unethical pressure to bear on Caedmon kids to submit consultation forms supportive of the closure. I heard no protests of innocence, much less admissions of guilt. We know who they are.

So I conclude this hasty report with some of the questions and statements raised on the night and offered to me as I made my way out of the meeting. Perhaps Arthur BARKER and Pete DWYER will perceive the wisdom of passing swiftly over their prepared pitch on Tuesday evening (actually, why not scrap it – nobody needs to hear all the reasons why no other option is open to consideration), instead offering honest responses to some, at least, of the following questions and comments:

On Excellence in Education

I intend to print out this list and bring it along this evening (Tuesday 15th March 2016).

Let us see if any substantive answers are forthcoming.

Only if Pete DWYER can jettison his idée fixe and embrace outside creative input – and let me not conclude this brief report without mention of Mike WARD’s compelling argument for an independent review of schooling throughout Whitby and the Esk Valley – is there any hope of saving Eskdale School.

Without a dramatic re-think, Pete DWYER’s only useful contribution will be his resignation.

By the way, did anyone spot any of our local Conservative County Councillors? Did any of them speak? Or are they so confident of re-election that they do not feel the need to represent their electors, even in extremis?