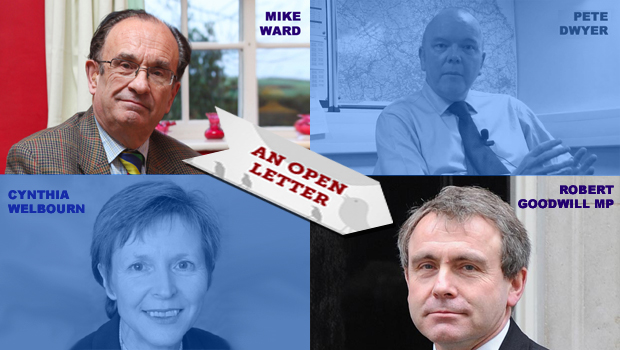 – from Mike Ward, former Chair of the Eskdale School Board of Governors, to Scarborough & Whitby Member of Parliament Robert Goodwill.

(The ‘comments and letters’ to which Mike refers in his text are reproduced at the foot of this page, for convenience of reference):

Thank you for your continuing support for Eskdale over the last few years.

Your comments and letters have been appreciated by all involved with Eskdale and many more in the wider community.

We all want the very best educational provision in the Esk Valley.

Unlike many politicians who might have sat on the fence, you have nailed your colours to the mast. Your actions must be applauded

It is unfortunate that the same cannot be said of our three Conservative County Councillors. Their silence has been almost deafening!

I fully appreciate that Councillor Plant may have a conflict of interest when it comes to any vote in a debate at County Hall as his wife works at Caedmon College.

Does this, however, really prevent him from having an opinion?

Surely his wife would never be subjected to any pressure if he stood up for Eskdale.

Why are all three Councillors Chance, Plant & Swiers not letting their constituents know where they stand on an issue so vital to the future of education in our area? Have you discussed the issue with them?

Do they have an opinion?

Whitby Town Councillors have let us know their opinion as have a number of Labour and Conservative Councillors on Scarborough Borough Council.

Is it really too much to expect that our area’s Conservative County Councillors let residents know what they think?

There has always been a right way, a wrong way and a Whitby way, but now NYCC are dictating their way for Whitby.

For NYCC, their way is certainly the only way. All too often in the public sector, once a path has been decided upon there can be no deviation.

Lip service may be given to the general public, but in the end they simply do what they always intended to do.

This is once again proving to be the case for Eskdale School.

A done deal?! Like you, I sincerely hope not.

As you know, a major error of judgement came about in the early 1970’s when comprehensive education was organised for Whitby. The decision then, as now, was based on buildings and finance.

It is a decision which has come back to haunt us all.

Instead of conducting reviews over the following years, NYCC simply buried their heads in the sand and invested monies in other parts of the County.

Whitby was out of sight from County Hall – so out of mind.

Over ten years ago, Cynthia Welbourn (Pete Dwyer’s predecessor) made it known that her preference for secondary educational provision in the area was to create one split-site secondary school with sixth form provision.

NYCC have never wavered from this decision, refusing to even consider any other option or conduct an independent review into education in the Esk Valley.

We can only surmise how Cynthia Welbourn convinced an aspiring Deputy Head, Keith Prytherch, with good administrative skills at a large school in Northallerton to apply for the Headship of a small middle school of just under 300 pupils in an out of the way spot like Whitby.

To many this could have been seen as a demotion rather than a promotion.

When I joined the Governing Body of Eskdale, Keith Prytherch had already been in post for a while but there was already talk at meetings of a Federation in Whitby, with one Executive Headteacher.

This was important as, at the time, Whitby Community College was failing all students in the area.

When Rachel Totton ‘left’, Keith Prytherch was ‘parachuted in’ as Acting Head of the College and from there was made Head.

Huge pressure was brought to bear at that stage not to appoint a Head at Eskdale School, but the Governing Body resisted and appointed an outstanding candidate in Mark Taylor, who was in position for the next three years. With no disrespect to the other Heads I have worked with, Mark was one in a million. His team-building skills and rapport with his students were second to none.

The federation/amalgamation debate, however, never went away. In Mark’s final year, after considering all the pros and cons, Eskdale Governors rejected the proposal on the table, mainly on the grounds that it wasn’t addressing the curriculum needs of our pupils but was focussing too much on staff contracts, reducing costs, and subsidising 6th form provision at the College with monies provided for the education of our 11-14 year olds.

Sue Whelan, again after pressure on the Governors not to appoint, replaced Mark Taylor.

The ‘F’ word (Federation) was banned in school for a time.

However, when Pete Dwyer replaced Cynthia Welbourn, he was never going to let it drop.

At a meeting in Whitby with the three Heads and the (then) three Chairs of Governors, he refused to change the County’s position or consider other options saying that Whitby was already costing the County too much money.

Once again the focus was not on pupil need –  just finance.

In an attempt to maintain it’s position and move to become an 11-16 school, Eskdale applied for Academy status with a sponsor – DRET – in place. However, this application was rejected, althoughin line with Conservative Government policy, after strong opposition from NYCC and Whitby Community College.

Caedmon School decided to amalgamate with the Community College.

Even with their increased numbers and the redundancies that followed (with possibly more still to come), Caedmon College has financial issues as seen in the latest consultation document. No-one is thinking about the best opportunities for our young people but rather financial matters, the savings that could be made and the capital receipts from the sale of the Eskdale site.

Over time, Keith Prytherch has gone from being Head of a school of 300, to one with over 1,000 with (we might expect) a salary to match.

Was this part of any promise made by Cynthia Welburn, 10+ years ago?

Are ‘open’ interviews expected at any stage if a new school is created? Many staff, I am sure, will have to rea-pply for their jobs, some will lose posts of responsibility and there could be another 20+ redundancies.

Will this really improve the opportunities for our students with increased class sizes, etc, etc?

Is something that the parents of those students at Caedmon College even want?

Whitby is being sold down the river at the altar of money.

The business plan submitted by Eskdale was a good one and, with a limited amount of funding, the improvement required could have been achieved by moving to become an 11-16 School with 550 pupils.

All that was required of NYCC was to reduce the PAN (Pupil Admission Number) from 150 to 110, which as our local MP, you supported.

Did Pete Dwyer in fact reduce the PAN to 110 as reported in the Governors Minutes and then revise that decision to make it 125?

If so, he would have known it would invalidate the Business Plan without considerably more investment.

NYCC now appear to be digging their heels in, trying to create their seriously limited vision of a 11-19 split-site comprehensive.

We all know, as seen in the Graham/Raincliffe issues in Scarborough, split-site schools have enormous problems.

We all know, from the figures, that many pupils opt out of attending Caedmon College.

We have all known the wide strength of feeling for Eskdale for some time.

Why is he only presenting one option?

Why is he insisting on propping up a 6th form which may be unsustainable even in the medium term?

Why is he so averse to conducting an independent review which would surely be in the best interest of all students in the Esk Valley?

It is time for the Officers and Councillors of NYCC to listen to residents, as well as yourself.

A REVIEW OF EDUCATIONAL PROVISION IS NEEDED – NOW.

I hope you may be able to persuade those in a position of authority that this must be the wisest course of action and in the very best interests of all students in the Esk Valley ?

Thank you again for your continuing support. 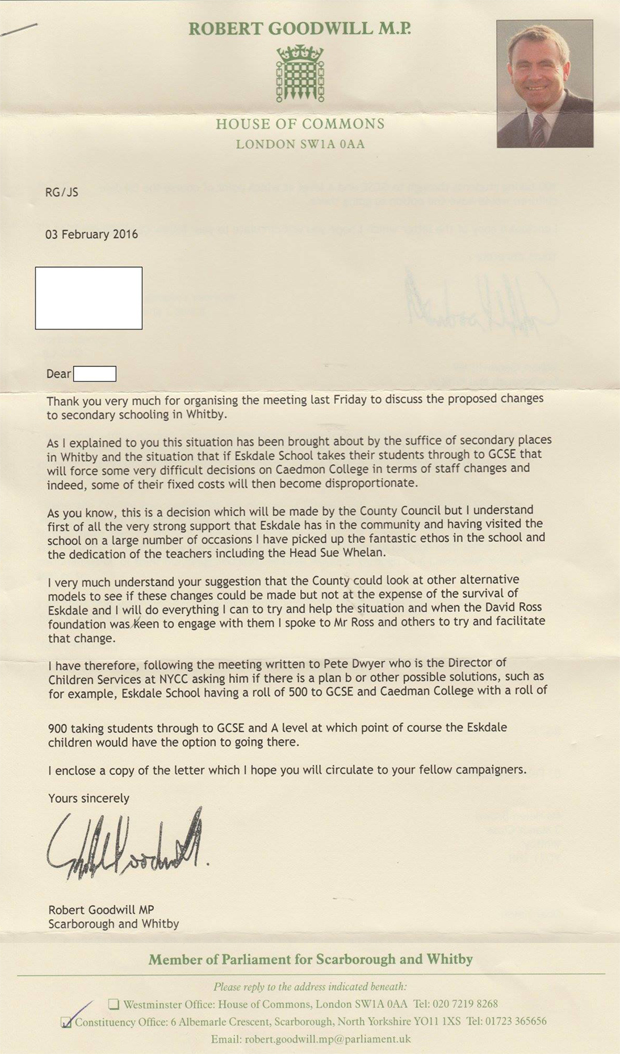 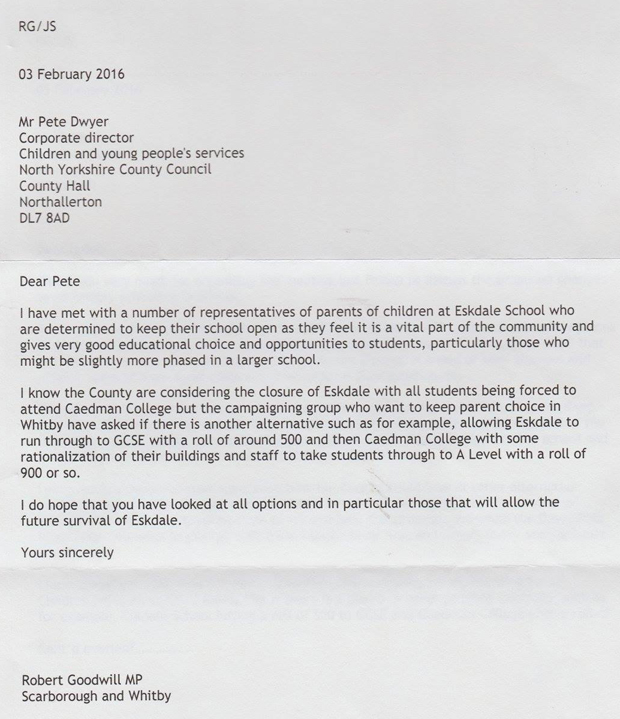 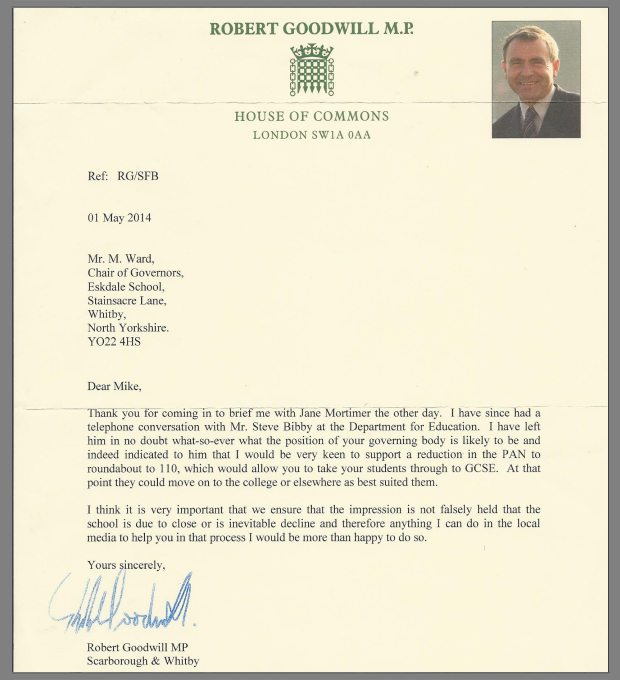