Readers are sure to remember the extraordinary case of Phil Woolas, who was elected MP for Oldham East and Saddleworth in the 2010 general election, only to be stripped of his seat for breaching the Representation of the People Act – the law governing the conduct of candidates during the run-up to an election. In simple terms, the law states that candidates are prohibited from spreading lies about other candidates that might result in an adverse impact on their chances at the polls. Not only was Mr Woolas stripped of his seat, he was also suspended by his party and prohibited from standing for election again for the next three years

Real-Whitby can EXCLUSIVELY reveal that Whitby may soon have its very own WOOLASGATE.

Whitby Police have confirmed that an investigation is underway into a breach of the same law [s.106 of the Representation of the People Act 1983] that caught out Phil Woolas. It is understood that the investigation is centred on candidates in the West Cliff ward of the Scarborough Borough Council election. The suspect cannot be named for legal reasons, but Police have acknowledged that they are now in possession of forensic material (believed to include DNA traces) and digital evidence that could also lead to charges under the Malicious Communications Act 2003.

Meanwhile, North Yorkshire County Council has confirmed, in an FOIA response, that there are concerns about the authenticity of some of the ‘Me Too!’ vouchers, and an investigation is on-going. The investigation extends to the matter of the veracity of the amounts invoiced by some of the providers. It is understood that the Police investigation into the ‘Woolasgate’ incidents also extends to the ‘Me Too!’ irregularities, and, if successful, may well result in prosecutions under the Fraud Act.

Given Inspector Mark Grange’s stance (see CodHead 013), CodHead has little faith in these investigations. Only time will tell. 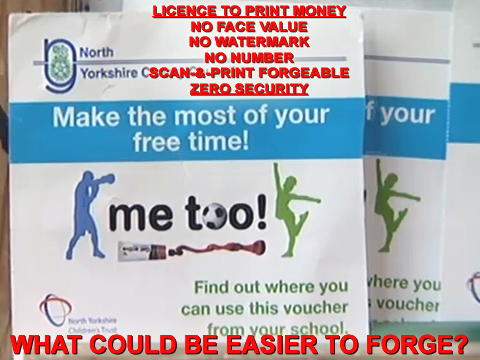