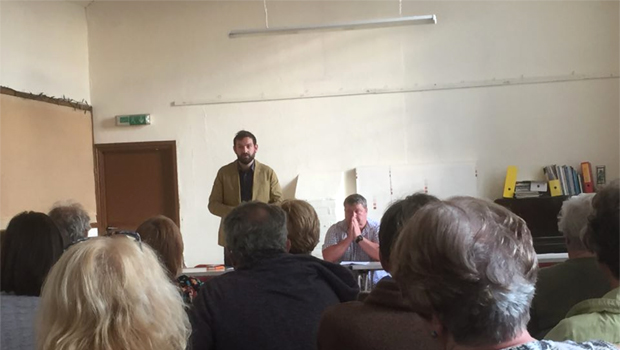 This evening, Wednesday 23rd August 2017, I attended a hustings for the by-election to be held on Tuesday 29th August 2017 for the Mulgrave ward of Scarborough Borough Council .

The turn-out, as far as members of the public were concerned, was good, with all seats occupied – I would estimate around 30-40 people.

Before the hustings began, I learned from the general conversation that two of the four candidates had tendered their apologies and would not be attending – the Conservative candidate Marion WATSON apparently had a more pressing appointment, and the Independent octogenaraian candidate John ARMSBY (a former member; he lost this seat in 2015), who had apparently indicated that his electors knew perfectly well who he was; he needed no further introduction, thank you.

A third candidate was also absent. Lee Francis DERRICK for the Yorkshire Party, had apparently not responded to his invitation.

This latter, in particular, came as no surprise to me. I had written to the Yorkshire Party on 1st August 2017 requesting a little background and a picture of the candidate. No response. I must take that as an indication of the kind of representation Mr DERRICK would offer his electors – were there even a hope in hell of him being elected.

This left Hugo FEARNLEY [Labour], the sole attending candidate, to accept the Chair’s suggestion that the session could best be salvaged by an open Question & Answer session.

Hugo FEARNLEY introduced himself with a brief resumé of his life in the environs of Whitby. He explained the special significance of this particular by-election, that it provides an opportunity to negate the present Tory majority at SBC.

The Question side of the dialogue was hogged by two ladies of a certain age who, whilst professing to be apolitical and impartial, used the opportunity to bombard Mr FEARNLEY with increasingly hostile questions, some ranging far beyond the remit of whichever candidate achieves election to a seat on a Borough Council. That, and singing the praises of paedo-apologist Councillor John NOCK [Con.], who, with his colleague County & Borough Councillor David CHANCE [Con.], slouched against a doorpost a piece like a pair of nightclub bouncers, chuntering away together, not so sotto voce, throughout the meeting. The yah-boo-sucks contingent.

At one stage, a rather acrimonious mini-debate broke out between the two shills and three or four other members of the public. Disappointingly, the Chair did nothing to intervene, spending much of the meeting in an attitude of silent prayer.

Special credit, then, to Hugo FEARNLEY [Labour], for showing his respect for electors by turning up and answering, or making an honest attempt to answer, some carefully prepared landmine questions without ever rising to their facile attempts to rouse him to some act or word of folly.

Credit, too, to Mr FEARNLEY for holding up his hands and admitting that he has plenty to learn.

But, clearly, what informed every word Hugo FEARNLEY spoke tonight was his obviously heartfelt sense of community, his compassion for the disadvantaged and his determination to fight for local services, elected or not – and, above all, to uphold honourable standards of behaviour in a fair, open and transparent way. I found him extremely engaging. He fits the mould of a long-awaited new generation of local politicians forming up to replace the dinosaurs at the Town Hall.

Mr FEARNLEY is thirty-five, single, grew up in the Whitby area and runs a successful business paying the Living Wage and developing sustainable and ecologically benevolent natural products. He has a good head on him and is clearly capable. More than that, he has heart.

On the distaff side, he is inexperienced. He may even be a little naïve, as he modestly himself admits; his youth entitles him to be. But equally, he is nobody’s fool. He is personable, charming and looks every inch the part of a Councillor. With the benefit of some experience, I can see him becoming a big player at SBC.

The pictures tell the whole story.