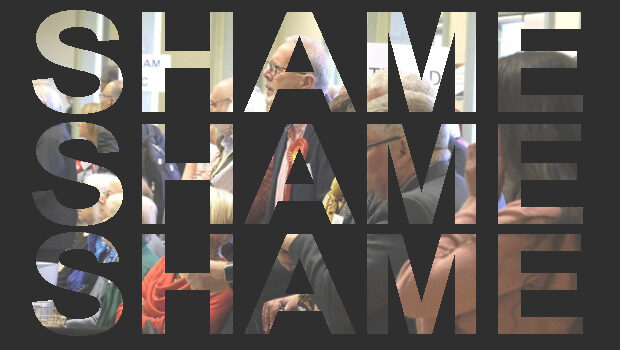 As many of you will by now be aware – and indeed everyone should be aware – at the beginning of May 2022, our current local ruling body, Scarborough Borough Council (SBC) will begin its terminal decline into oblivion when a new Unitary Authority covering the whole of North Yorkshire is elected.

The exact form the new authority will take, is, as yet, not decided. Details will probably be announced in the new year, but there is no doubt that SBC, and (if he survives that long) the current Labour leader of SBC, Stevonio Siddonso, will both be un-ceremonially consigned to the dustbin of history.

Now, I don’t think that there will be many who shed any tears over the demise of SBC, or an end to the loony left rule of champagne socialist Siddonso. Indeed, in this regard, the abolition of SBC cannot come soon enough for many people.

However, the problem is that although the leadership’s power to wreck the Borough’s economy and rob residents blind will end in about 8 months time, this still leaves Loony Siddons and our money-mad Officers plenty of time to complete their ‘slash and burn’ agenda.

Projects such as the great Land Grab, which will see Siddons give away a rumoured £38 million worth of Council-owned land to some Micky Mouse housing association, will be forced through.

The ludicrous ARGOS development, which will see Siddons and the Officers borrow £30 million to build Coventry University a block of flats, is apparently still one of the leadership’s prime goals and they are determined to get it signed off before they are booted out of power.

While Siddons and his mates will have, so I am told, the greatest of fun over their few remaining months in power squandering the nearly £20 million Scarborough was awarded from the Governments Town Deal Fund.

From the installation of giant ash trays in the town centre, to the vinyl-wrapping of empty buildings, and of course inflicting the hated £6.5 million pound Harbours Regeneration scheme onto sea front traders and our harbour users, we can also look forward to several more equally mad-cap and costly ideas being forced down ratepayers’ throats before Siddons power is taken away.

Indeed, while Siddons is busy squandering our money on these projects he is also forcing through schemes which will further swell the Council’s coffers. Anyone who believes that the closure of the North Bay and South Cliff toilets, on the promise that Siddons will build new facilities to replace them, is, I would venture, living in cloud cuckoo land.

The closure of the existing facilities is being made now to ensure that as much as possible is available in the kitty bank before they smash it open, take the contents, and flit; the more there is in the pot, the more there is for us; that seems to be their motto.

Nor, it seems, is Siddons going to go before he has had his spiteful revenge on those he believes need teaching a lesson or two. The hated Harbours Regeneration scheme, which many believe will do irreparable damage to the sea front, is being imposed on harbour users and sea front traders as pay back for their refusal to do as Siddons and the Officers want.

The same can be said for the motor bike races on Oliver’s Mount which, it appears, Siddons wants to close down. The facilities needed to allow racing to take place on the Mount have been closed, not, so I am told, because they are unsafe, or because they cannot be economically restored, but because the noise from the racing annoys Siddons and his South Cliff neighbours. Close down Oliver’s Mount Races save a few quid and get rid of a nuisance.

The rule of Siddons and his cronies is undoubtedly coming to an end but, as can be seen, they still have plenty of time, before they return back under the stone from which they slithered, to do irreparable damage to our beautiful town.

However, the question must be asked:

How can 12 loony left wing nobodies and their champagne socialist leader, out of a Council with a total membership of 46, be allowed to wreck the once proud Borough of Scarborough?

Sadly, there seems to be no answer to this question, and believe me I have asked many of the elected members who are supposed to represent residents how this reign of terror is being allowed to stand, and none can give me a plausible answer.

Those of the current elected membership who support Siddons should, many feel, myself included, hang their heads in shame. The seven Independents who currently give their slavish backing to this shambolic, power-mad and thoroughly incompetent leadership, should re-read their own pre-election literature and ask themselves if supporting Siddons and his loony left pals is living up to the promises they made back in May 2019. They will find, believe me, that they do NOT.

The Independents, and the two Greens for that matter, should take a long look at what they said they would do if they ever gained positions of power. They will, I suspect, now that they have some power, find it hard to reconcile their good and sensible pre-election aspirations with the harm and misery that, because they are still supporting Siddons, they are inflicting on residents of the Borough.

The current Labour-led administration, headed by Steve Siddons, is nothing short of a disgrace and will undoubtedly go down as the worst Council the residents of the Borough have ever had to endure. However, all members who have supported Siddons and his cronies should be aware that the stench of greed and corruption which hangs over Siddons and his loony pals will inevitably cling to them.

There are, as the saying goes, “none so blind as those who will not see” – and those members who have, thus far at least, supported Siddons, need to open their eyes, look around, and see that the leader they are backing is not, in fact, a worthy leader but a self-serving get-rich-quick champagne socialist. A leader who will, once the gravy train leaves the station in May, take his money and run, leaving them to carry the can full of stinking shame.

Oh and you members who support Siddons might ponder this; don’t think that just because you have ruined your reputations and made yourself into public hate figures that you will get invited to the villa in Tuscany; oh NO, such invitations will only, so I am reliably informed, be extended to senior Council Officers.