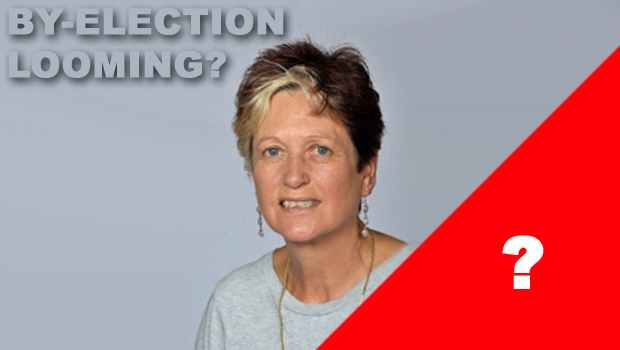 According to the SBC web-site, Councillor Marie HARLAND [Con.] did attend the Meeting of Full Council on 7th November 2016.

By the same token, I can ‘definitively’ confirm that Councillor Marie HARLAND [Con.] has not attended since 12th December 2016. 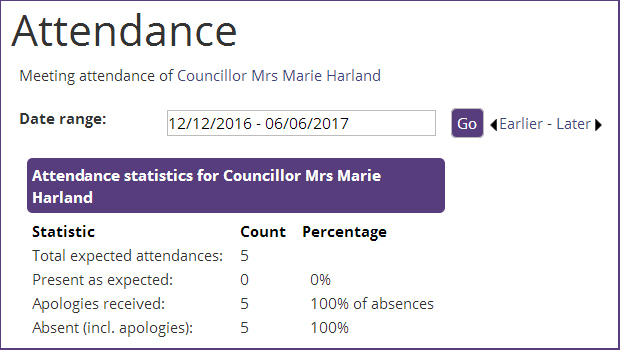 Of course, I say ‘definitively’, but I stand to be corrected; the SBC web-site is not always entirely accurate.

What are the attendance requirements incumbent upon serving Councillors?

The SBC web-site has this to say:

1.1 – Section 85 (1) of the Local Government Act 1972 provides that where a Council member fails throughout a period of six consecutive months from the date of his/her last attendance to attend any meeting of the authority then, subject to certain exceptions, s/he ceases to be a member of the authority. This disqualification can be prevented if the non-attendance is due to some reason approved by the Council before the expiry of that period.

1.2 – Attendance is generously defined and as rule of thumb would apply to any meeting of the authority specified as an approved duty for the purposes of  the payment of travel allowances.

There are subtle distinctions between the above SBC version and the actual legislation:

85 Vacation of office by failure to attend meetings.

(1) Subject to subsections (2) and (3) below, if a member of a local authority fails throughout a period of six consecutive months from the date of his last attendance to attend any meeting of the authority, he shall, unless the failure was due to some reason approved by the authority before the expiry of that period, cease to be a member of the authority.

With regard to (2), however, Councillor Marie HARLAND [Con.] is not listed on the SBC web-site as holding membership of any Committee(s). I can find no record of any other attendances.

Nor can I find any notice, on the SBC web-site, of Councillor Marie HARLAND [Con.] having been indisposed in any way (e.g. health issues, bereavement, etc) that might justify a dispensation. Naturally, if Councillor HARLAND is unwell, one wishes her a full and speedy recovery.

Not one of the Councillors I approached could confirm having received any notification from the Monitoring Officer that any kind of dispensation had been granted to Councillor Marie HARLAND [Con.] to excuse her absences.

Interestingly, when Councillor Michelle DONOHUE-MONCRIEFF [Con.] was unable to attend for a lengthy period, SBC Monitoring Officer Mrs Lisa DIXON very kindly emailed her to remind her of the requirements, thereby enabling her to comply with the terms of the Act and thus retain her seat on the Council.

I cannot for one moment imagine that Mrs DIXON has not afforded the same courtesy to Councillor Marie HARLAND [Con.]. An omission of that order would amount to gross unfairness to Councillor HARLAND and Mrs DIXON, as we know, is punctilious on matters of fairness.

Nevertheless, as far as I have been able to establish, Councillor Marie HARLAND [Con.] is now due for disqualification.

This eventuality would, of course, have a number of significant consequences.

There is, of course, also the small matter of any Allowances paid to Councillor Marie HARLAND [Con.].

Holding no Special Responsibilities, Councillor HARLAND is entitled only to the Basic Allowance of £4,041.24 per annum. Her failure to attend for somewhat more than the past six months means that she has enjoyed £2,000+ of taxpayers’ money for doing – well, apparently nothing much at all. Nice work if you can get it (and sleep nights).

I cannot comment on the views of electors in Mulgrave ward, who have been deprived (by Councillor HARLAND’s absences) of enjoying the benefits of her democratic representations on their behalf – leaving them with only the dubious input of Councillor John NOCK [Con.], the largely discredited defender of predatory “hebephile” former Mayor, Peter JACONELLI [Con.].

Firstly, Councillor HARLAND’s disqualification would create a vacancy in the Mulgrave ward, and this would necessitate a by-election. This would not be attractive to the Tories, who are known to have been scraping the barrel for candidates for some time.

Secondly, and of no small importance, is the effect the loss (if only in the short term) of a Conservative Councillor may have – and with it, the benefit of their smallest possible majority – on the long-awaited vote of No Confidence in Leader Councillor Derek BASTIMAN [Con.] and his widely-reviled Cabinet – which now looks likely to take place towards the end of June 2017.

Lastly, there remains the possibility that Councillor Marie HARLAND [Con.] may wish to resign her seat forthwith, thus avoiding the stigma of having been disqualified. That would be the honourable outcome, and would at least restore a smidgen of dignity . . .