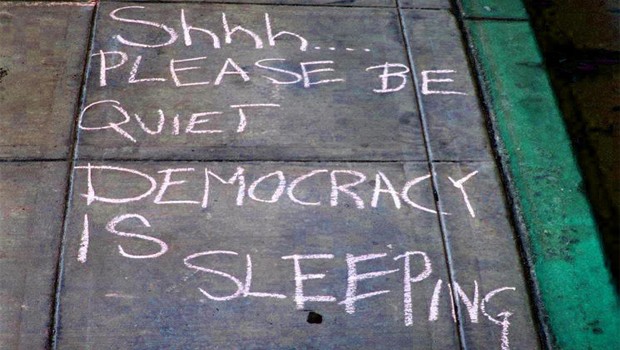 A Letter to the Editor from Amanda SMITH, writing as a member of the public in response, perhaps, to recent misinformation in the Whitby Liar. Amanda is one of only four members of Whitby Town (Parish) Council who possesses an electoral mandate. Her husband Councillor Steve SMITH is another. It has been six years now since Councillor Steve SMITH was Mayor – six years in which three successive Mayors have served, having failed to garner a single vote between them at the ballot-box. Six years of unmandated, incompetent crony leadership. And worse.

Hopefully, unbiased and objective readers of Amanda SMITH’s detailed and well-documented Letter (with numbered footnotes, in square brackets, below the text) will find it difficult to avoid the obvious conclusion – that Whitby Town (Parish) Council, in its present incarnation, is NOT FIT FOR PURPOSE.

Democracy: a system of government by the whole population or all the eligible members of a state, typically through elected representatives

and that an elected representative must place integrity before all else.

If the electorate do not have the trust in their representatives to be able to freely to express their opinions in the language of their choosing then how can their elected representatives represent them?

Equally, if the electorate are uninformed, how can they recognise what they need to be conveying to their elected representative? Without knowledge and understanding all systems crumble and without accountability then we are left with autocracy.

So do Whitby Town Council encourage freedom of speech? Perhaps this can be best expressed in the minutes of council:

Or perhaps the reported words of the Town Mayor: [2]

The reported thoughts of the Chair of Human Resources – the Council body responsible for hearing all complaints:

It appears clear, then, that Whitby Town Council is convinced that Elector A has over-exercised the right to free speech.

But if the right to communicate is curtailed, what happens when the elector wishes to notify the Council of a breach of Data Protection which may have placed a child in danger? Should this languish in a junk file or be ignored?

Enshrined as a founding principle of democracy is the right of free speech.

It is not just Elector A whose freedom to speak has been denied. On February 9, 2015 Whitby Town Council received an email asking a series of questions relating to an article published by the Gazette. The correspondent was told the matter would be referred to members and the email was circulated to all Councillors. At least two councillors replied going to considerable length to make clear they were talking as individuals. The Mayor responded by circulating a letter reminding Councillors that they should not speak for the Council and asking for an apology.

On hearing of the decision, Councillor Amanda Smith wrote to all Councillors asking which part of her communication they believed portrayed a corporate view point. She received the response below which indicates that not only is one Councillor required to apologise for exercising her freedom of speech, but free speech is also being removed from all other Councillors, as a whole:

One is left wondering under what circumstances Whitby Town Council would endorse, let alone encourage, interaction of the electorate with its democratic representatives.

So how about transparency and openness?

This example of a failure to be transparent and open is not an exception.

In this instance, the Councillors comprising a whole Committee are being “dealt with” for being open and transparent with a Whitby Parishioner.

If the Town Council do believe in openness and transparency perhaps they will pass a motion to commend the outstanding work of the North Yorkshire Enquirer in bringing into the open the appalling crimes of ex Scarborough Mayor Peter Jaconelli.

Perhaps then the second foundation stone (transparency and openness) examined, which currently appears to be cracked at its centre, may be restored.

Currently there are thirteen objectors against the plans for a construction village; there are no supporters.

A petition against the site stands at eighty two; there is no petition to support the site.

The third foundation stone (knowledge and understanding) when examined showed signs of failure.

If a Council is not accountable through the ballot-box, then its Complaints Procedure must stand in its stead [12]. Whitby Town Council does have a Complaints Procedure, administrated by the Human Resources Committee – anecdotally, always under an exclusion of public and press. I have been unsuccessful in finding an example of a Complaint being upheld.

The final foundation stone (accountability) would appear to be severely flawed.

To reiterate; Whitby Town Council is at the base of the bureaucratic pyramid that is our democracy. The base of the pyramid must be as solid as a rock if the pyramid is to stand. I wonder how much longer the pyramid will stand? Let us hope that May 7, 2015 sees the start of restoration works, the future of democracy may well depend on it.