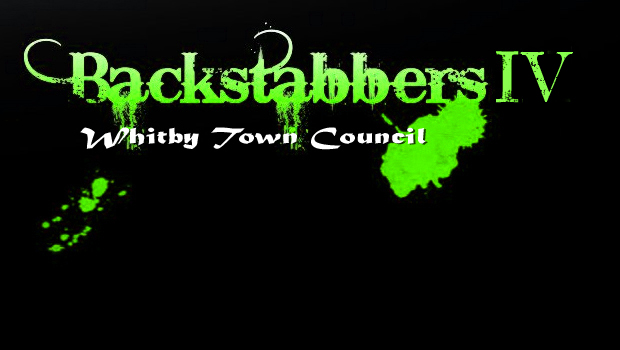 Please do not imagine that this present article – fourth in a series examining a Machiavellian little plot in a Town (Parish) Council on the North Yorkshire coast – concerns matters too trivial to mention.

It will (I hope) offer some insight into the way in which many Councillors, even at the lowest level of local government, fall easy prey to Clerks (often Common Purpose trained and far too sharp for them) who are able to manipulate cliques of malleable Councillors in order to ensure that their Council proceeds in such a way as to present least resistance to the machinations of Officers at the parent District or Borough Council.

The background to this particular episode is documented in considerable detail in the following previously published articles:

For those already familiar with the affair, here follows a very brief synopsis, as an aide memoire.

It stems from a series of reports to me, in autumn 2013, from a total of four Whitby Town (Parish) Councillors, to the effect that they were deeply concerned that the Clerk had been carrying the Council’s back-up digital data off-site on a portable memory device, without authorisation (or, perhaps, insurance) to do so.

I mentioned this information, in passing, in an article about Exelby, Leeming & Newton Parish Council (ELN) published on 29th June 2014, entitled “Equal Under The Law? Parish The Thought”, where the Clerk has been operating in the same way.

For reasons unknown, WTC Clerk Pam DOBSON jumped to the conclusion that information about her transportation of data off-site without authorisation had been discussed at a Finance, Policy & General Purposes Committee (FP&GP) meeting on 17th June 2014 – just ten days before my ELN article – and the further conclusion that, by passing that information to me, the Councillors concerned had breached confidentiality and consequently endangered her by exposing her to the risk of data thieves waylaying her (to steal the portable memory device) during her time away from the office with the data in her possession.

These conclusions were entirely false. The Minutes of that meeting make no reference to any such discussion having taken place. The Clerk’s off-site data peregrinations were actually discussed at a meeting in September or October 2013, nine months before, and the four Councillors shared with me their concerns regarding the security of the data a short time thereafter.

At the FP&GP Committee meeting on 19th August 2014, the Clerk lodged a formal Grievance and seven Standards Complaints against all members of the FP&GP Committee, excluding the Deputy Mayor (who had not been present at the 19th June 2014 meeting), but including Councillor Derek ROBINSON (!), and announced also that she had referred the matter to the North Yorkshire Police for potentially criminal investigation.

These are the Councillors who fell foul of the Clerk’s allegations:

Readers who wish to examine all of the twists and turns of this tortuous affair I now refer to the three articles linked above.

In short, the past two months have seen Mayor  Councillor Heather COUGHLAN and Chair of the Human Resources Committee (HR) Councillor Noreen WILSON stumble their way through a cockamamie Grievance procedure, the outcome of which I can now report in its full absurdity, since the draft Minutes of the HR Committee for the meeting of Friday 10th October 2014 are now available and are due to be received by Full Council next Tuesday 4th December 2014.

Very few Councillors have recognised that the Council may be heading for a major pratfall.

Here is the header of the first page of the Minutes of the HR Committee meeting of 10th October 2014: 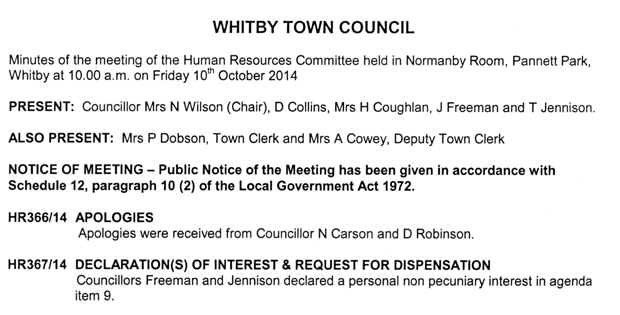 Please note that both the Clerk and the Deputy Clerk were present for a meeting comprising only five Councillors:

Curiously, the HR374/14 Minute is drafted in the style of the Clerk (who was not present), not the Deputy Clerk.

For those who are not conversant with Clerk-speak, a word of explanation is in order.

Firstly, at HR367/14, it is not the case that the interests declared by Councillors John FREEMAN and Terry JENNISON were merely personal and non-pecuniary; quite the reverse. They are certainly personal and prejudicial and almost certainly pecuniary, too, since considerable legal costs may arise from both the civil and the criminal aspects of the allegations raised by the Clerk. No Dispensation should have been granted and indeed according to the Minutes, no Dispensation was granted. Councillors FREEMAN and JENNISON should, therefore, have left the chamber before the relevant Agenda Item.

This view is confirmed by the fact that the Town Clerk did leave the chamber before Agenda Item 9 , precisely because she, too, has a personal and prejudicial as well as a pecuniary interest. What is noteworthy is that the Clerk recognised her own obligation to declare her interest and leave the meeting and did so. However, she did not advise Councillors John FREEMAN and Terry JENNISON to do so.

Both Councillor John FREEMAN and Councillor Terry JENNISON, in taking part in that vote, actually took part in the decision-making process that UPHELD the Clerk’s Grievance.

Regarding the Grievance itself; no witnesses have been interviewed. No documents have been submitted. No evidence has been produced to support the Clerk’s allegations. Nevertheless, the Clerk’s Grievance has been UPHELD. That is to say that the HR Committee has RESOLVED that the members of the FP&GP Committee have failed in their duty of care to the Clerk – which is to say that the Council has failed in its duty of care to the Clerk.

Along with Councillors Noreen WILSON (Chair), Dennis COLLINS and Heather COUGHLAN (Mayor), Councillors John FREEMAN and Terry JENNISON – who both sit on the Finance, Policy & General Purposes Committee (FP&GP), as well as the Human Resources Committee (HR) – have UPHELD the Clerk’s allegation that the members of the FP&GP (with the exception of Deputy Mayor Sean RIXHAM-SMITH – who, readers will recall, was not present at the 19th June 2014 meeting) are ‘guilty’ of having ‘leaked’ information – information that was not confidential, having been disclosed at that open-to-the-public meeting, back in September or October 2013 – and there is no duty to treat information disclosed in a public meeting as confidential.

In short, Councillors John FREEMAN and Terry JENNISON have taken part in the decision to pronounce themselves ‘guilty’ – ‘guilty’ that is, of a non-crime that they anyway did not commit (for I can confirm that neither of these two worthies was amongst the four Councillors who did report the open information about the Clerk’s data indiscretions, in the public interest, over a year ago).

Let me repeat that.

Councillors John FREEMAN and Terry JENNISON have found themselves ‘guilty’ of a non-crime that they did not commit.

Councillors John FREEMAN and Terry JENNISON, despite having, for the past five years, between them held the Mayorship (thereby presenting the public face of the Council, though without ever receiving a single vote at the ballot-box) are obviously incapable of grasping the ramifications of their own actions and are thereby unfit for public service. Readers who rely on the Whitby Gazette for their news of Whitby Town (Parish) Council may believe that they have done sterling work – which probably says more about the Whitby Gazette than it does about these two former Mayors.

Furthermore – and this is far more important – these bumbling blockheads have UPHELD the Clerk’s allegations against all of the members of the FP&GP Committee – barring Councillor Sean RIXHAM-SMITH, but including Councillor Derek ROBINSON, who has not (and, having not been on the Council at the time of the so-called ‘leak’, could not possibly have) committed any breach of confidentiality whatsoever.

Councillor Derek ROBINSON is ‘guilty’ of absolutely nothing. But FREEMAN and JENNISON are ‘guilty’ of having taken part in the bogus process of ‘convicting’ him – without trial, and without any opportunity to defend himself.

The Clerk and the members of the Human Resources Committee – and particularly FREEMAN and JENNISON – owe Councillor Derek ROBINSON a humble and abject apology – and that may not suffice.

Make no mistake; this decision amounts to defamation – and if I were Councillor Derek ROBINSON, I would be looking for redress.

Quite apart from all this being morally unacceptable and, at the same time, side-splittingly farcical, there are nevertheless some deeply ominous potential consequences looming on the horizon.

To his credit, Deputy Mayor Councillor Sean RIXHAM-SMITH (the FP&GP Committee member with least reason to do so) has already apologised to Councillor Derek ROBINSON.

The Clerk has declined, on several occasions.

This time around, the members of the Human Resources Committee have handed the Clerk what amounts to a ‘letter of confession’ in the form of a Recommendation which, barring any intervention, will be unquestioningly ratified by Full Council on Mischief Night -Tuesday 4th November 2014 – and will thereby qualify as testimony beyond challenge in a court of law.

Once ratified, those Minutes will decree that the members of the FP&GP Committee did indeed place the Clerk at risk by disclosing the fact that she carries security copies (back-up digital data) off-site, where she may have been vulnerable to the risk of attack. Those Minutes will decree that the Council has failed in its duty of care to an employee – the Clerk. Yet Derek ROBINSON was not a member of the Council at the time of the disclosure of the Clerk’s unauthorised actions, and has played no part in the entire fiasco.

In short, the Council will be putting its head in a noose by rendering itself unable to mount a credible defence to any putative claim for Constructive Dismissal by the Clerk (should she ever wish to pursue that course), having already accepted culpability for breaching the terms of the Clerk’s Employment Contract.

At our £¼-million-a-year Council, the turkeys have voted for Christmas. 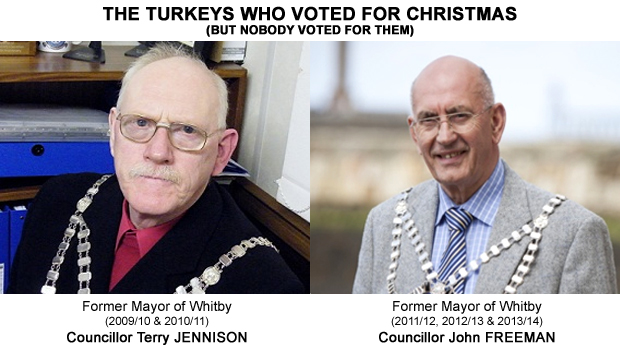 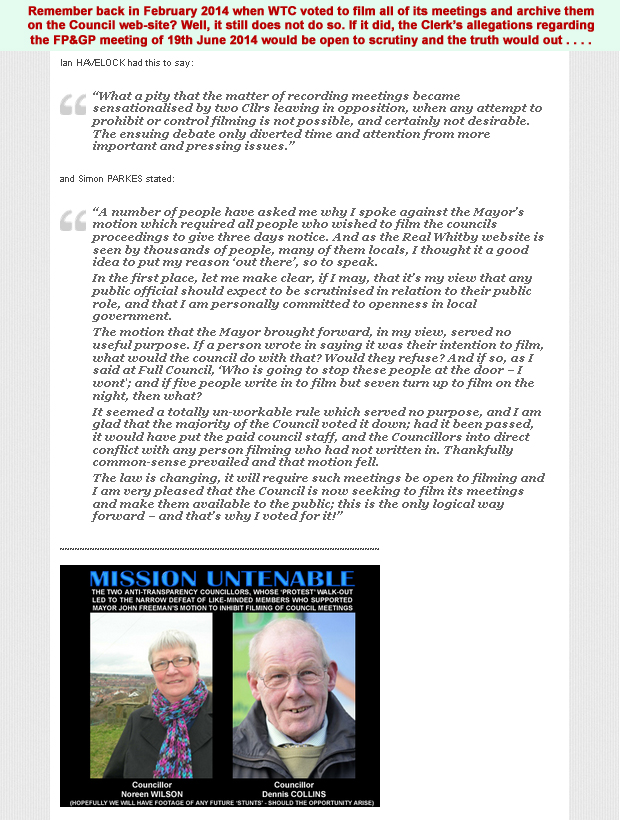