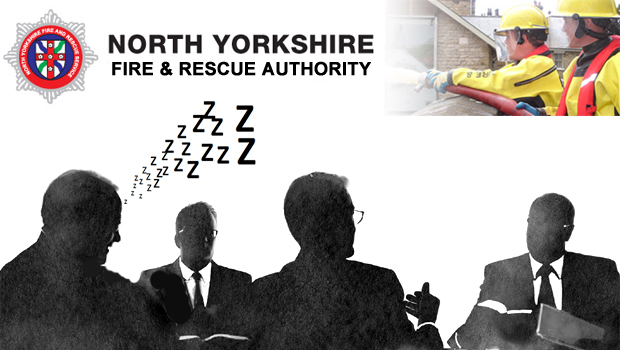 On 24th June 2015, the North Yorkshire Fire & Rescue Authority (NYF&RA) met at the NYF Training Centre in Easingwold in the District of Hambleton.

The Agenda for the meeting included a number of important annual reviews, many of them relating to austerity measures. Unsurprisingly, the public gallery included a strong Fire Brigades Union (FBU) presence with deep concerns regarding potential cuts in service delivery and working conditions. Naturally, they followed proceedings with the keenest interest.

Unfortunately, their presence was rewarded by the astonishing sight of two Authority members whose own interest was conspicuous by its absence. They fell asleep.

This was compounded by the even more astonishing spectacle of one of the meeting’s Support Officers approaching the somnolent duo ostensibly to pass them written information – in fact, a farcically inept subterfuge designed to wake the snoozers in time to vote without betraying their woeful condition to the FBU members, who were (of course) were neither fooled nor amused.

One of them had the presence of mind to capture photographic evidence of County Councillor Chris PEARSON [Con.] (pictured on the left) sleeping the sleep of the damned. 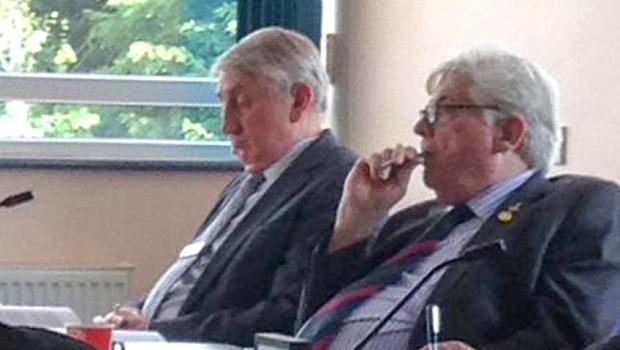 Just wide of the photographer’s line-of-sight, County Councillor Michael HESELTINE was also lost to the world, snoring gently and wearing a beatific smile.

But County Councillor Chris PEARSON has strenuously denied having fallen asleep. He told the Ripon Gazette that he was hot in his suit, that was all. Yeah. Right. Then get out of the kitchen.

Beginning, presumably, with preserving a state of wakefulness during the decision-making process.

Retired fireman Ian WATKINS has approached NYCC Monitoring Officer (present at the meeting as legal advisor) to ascertain whether or not it is acceptable – or even legal – for NYF&RA members to vote on issues of vital importance (which County Councillors PEARSON and HESELTINE did) having taken no conscious part in the preceding debate.

Would it be appropriate (or even legal) for Councillors to draw Attendance Allowance and Travel Expenses (around £4K p.a. on top of their NYCC Allowances) for presence at a meeting throughout a significant part of which they were sound asleep, for heaven’s sake?

What will be the view of Monitoring Officer Barry KHAN (who witnessed this sorry episode personally)?

Will Barry KHAN raise a Standards Complaint? Would it stick? (Do they ever?).

Is there even an appropriate article of the Code of Conduct to cover the scarcely imaginable contingency of decision-makers falling asleep on the job – a job which entails the disposition of circa £35M per annum of taxpayers’ money, at a time when budgetary cuts are expected to “put lives at risk”?

The Enquirer approached Brigade Secretary of the North Yorkshire Fire Brigade Union Steve HOWLEY to summarise his response to the sleeping Councillors. He stated:

It is very disappointing that some members of the Fire Authority continue to snub the FBU and refuse to meet us outside the formal meetings in order for us to discuss our concerns around managements proposals, offering them a balanced view prior to making very important decisions such as down-grading fire cover. These people are elected to decide what is best for the communities they represent.

It is therefore an absolute disgrace to witness 2 members of the Authority sleeping through the entire debate on the proposed changes, included in the Fire Cover Review, and then vote in favour to increase response times across North Yorkshire which will place the Public and Firefighters at greater risk – and this is without going to public consultation. These are very serious issues which will change the level of service the public of North Yorkshire will receive in the future. It just goes to show the total disregard these Tory Councillors have for the FBU as the major stakeholder, the voice of professional firefighters and the democratic process. It is clear they already have a fixed agenda and are being instructed which way to vote prior to any meeting. Otherwise, how else can you sleep through the debate, then wake up only to vote!

It is also disgraceful that the Chair of the meeting did not allow us to answer genuine questions of concerns that some non-Tory councillors attempted to raise.

These people constantly tell us that, as firefighters, we need to do more with less as austerity is biting hard, and things need to change. Maybe they should look closer to home when proposing changes in the interests of the taxpaying public of North Yorkshire, rather than just slashing frontline services, which will put both the Public and Firefighters of North Yorkshire at greater risk.

Is it actually legal to sleep through the debate and then vote, is this predetermination at its best?

So when we have all finished taking the well-deserve mick out of County Councillor Chris PEARSON [Con.] and County Councillor Michael HESELTINE [Con.] (no – not ‘Tarzan’), let us remember that the paramount issue here is one of safety.

There is no conceivable excuse for decision-makers sleeping whilst North Yorkshire burns. They say that there is honour amongst thieves. Perhaps. But I doubt that there will honour enough amongst our North Yorkshire Toxic Tories to ensure that these two indolent twerps resign – as they most certainly should.