A number of other local people also commented on the Jaconelli/Savile/North Yorkshire Police controversy, either by posting on Real Whitby or the Scarborough News, or by contacting Nigel Ward confidentially by PM through the Corruption Busters FaceBook Page.

This has given rise to further evidence of abuse and official cover up.

Fletcher was known by the girls as “Fletch the letch” and “Bananaman” from his habit of walking around openly in tracksuit bottoms with a banana in them to make him appear well-endowed. So if the school girls all knew, why didn’t the school or the Police?

Although it must be said that North Yorkshire Police did mount an effective prosecution in 2009 and Fletcher received two years and nine months in prison, it was only the courage of one of his victims who made a determined complaint as an adult to protect children from any further abuse, that brought his activities to a halt. For thirty years it appears the authorities were completely ineffectual, as in the Jaconelli and Savile cases.

Councillor Geoff Evans has courageously come forward and alleged that Jaconelli was protected by the Police and the Council because of his status as Mayor. This gave Jaconelli and his associates a safe environment in which to operate.

Jaconelli is the key figure. He established at the Ippon Judo Club in 1955, long before Savile came to live in Scarborough. We know Savile rewarded Jaconelli by taking him to the BBC on two or three occasions (where abuse is known to have taken place) and also provided Jaconelli with access to victims at one of his icecream parlours (where abuse is also known to have taken place). We also know that Savile visited Raincliffe School and it must surely now be a grave concern that Jaconelli abused his position as Governor to reward Savile with access to local school children.

It appears obvious that knowledge of Jaconelli’s perverted sexual preferences were well known to people locally, school teachers, school children and the North Yorkshire Police. He is even alleged to have had convictions for sexual offences. Yet nothing was done and he was allowed to have access to children without restriction.

Yet when the Force Intelligence Bureau received an enquiry from Surrey Police as part of their investigation into Savile – arguably the best opportunity of arresting and convicting him – he was given a ‘clean bill of health’, thereby ensuring he escaped prosecution and that North Yorkshire Police escaped any embarrassing questions about how they had failed to detect Jaconelli.

Had North Yorkshire Police acted on the information that was available to them and questioned Jaconelli, it could well have led them to Savile – and to Savile’s arrest.  It would certainly have protected generations of young people from his abuse. 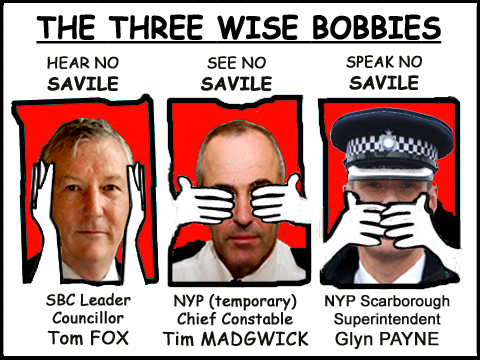 After four months of silence and evading the question “What did he know?” about Jimmy Savile, Councillor Tom Fox, the Conservative Leader of Scarborough Borough Council and former acting Chief Inspector of Scarborough Police finally responded. Real Whitby reported his remarks in full and they can be seen here.

However, Nigel has had no response to his email dated 18th February 2013:

Nor, as of yesterday, has Mr Trevor Harrington had any response from SBC to his Formal Complaint about Jaconelli .

North Yorkshire Police has also been notified in advance of our intention to publish these allegations and been offered the opportunity to comment. It has declined to do so. It appears that Councillor Tom Fox has been abandoned to field the criticism alone.

In short, everyone has put their umbrellas up and is maintaining their right to silence.