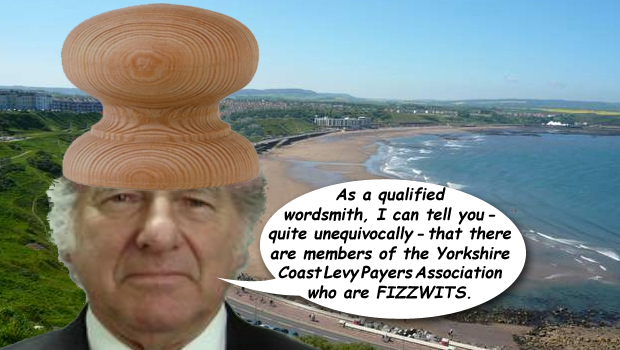 By all accounts, it was fraught meeting.

Amongst attendees, co-opted Whitby Town Councillor John “Hebo” NOCK (readers who do not know how he acquired his nickname can find out here) was conspicuous not only on account of his rather unconventional Showaddywaddy ‘look’, but also the duality of his position.

As the former Cabinet Portfolio Holder for Governance in Councillor BASTIMAN’s Tory administration, “Hebo” was in at the beginning of first overtures to the Council by Mosaic Ltd – the company running the Yorkshire Coast DBID. The Tories were always in favour of the DBID. Then then-Leader, Councillor BASTIMAN, with advice and guidance from his then Finance Portfolio Holder, Councillor Helen MALLORY [Con.], and Commercial Director Richard BRADLEY cast 38 votes in favour in the ballot.

At the same time, Councillor John “Hebo” NOCK represents the electors of Whitby, who are virtually unanimous in their opposition to the DBID.

How does he resolve this dichotomy?

Apparently by writing (see below) to one of the organisers of the Yorkshire Coast Levy Payers Association, in the style of former SBC Councillor and Cabinet Portfolio Holder Andrew JENKINSON [Con.] who, infamously, told Scarborough residents that they were “thick”. Priceless, coming from him.

Yes, “Hebo” blasted off one of his “wordsmith” masterpieces  culminating in the opinion that the attendees of the meeting are (and I quote his bizarre turn of phrase) “fizzwits”.

In the interests of clarity, I have interpolated my own comments in blue type:

It is very difficult to contain oneself when some of the people in the room are talking bollocks.

[A rather surprising, but refreshingly honest, admission of anger-management issues, coupled with inappropriate language.]

[REDACTED] was so wrong that he made a fool of himself.

[Disrespectful, in breach of the terms of the Councillors’ Code of Conduct, and certainly susceptible to a Formal Complaint. Not that “Hebo” will give a flying flock; last time, he was sentenced to a cup of coffee with the then Tory Chair, Councillor Andrew BACKHOUSE.]

The chap who tried to invoke GDPR was clutching at straws.

[This in reference to a legitimate concern regarding personal data passed by SBC to Mosaic Ltd.]

Those who said they would  not pay at all do not know the process of debt collection and the damage that will be done to their reputations.

[I would be amazed if “Hebo” knows the process either. For his information, I refer him to http://nyenquirer.uk/sbc-council-tax-summonses-junkmail/.]

Turning up mob handed at a County Court will not be viewed kindly by the judiciary.

[County Hall is the seat of NYCC; it is SBC who is administering the levy, as “Hebo” well knows.]

The best bet is to follow [REDACTED]’s initiative, and Cllr Alf Abbott is now the person most able to help.  He has access to data that [REDACTED] and I no longer have.  Quite frankly this is the only sensible course of action that you have.  Signing a petition will not help.  As I have explained in the past,  SBC must act within the confines of the BID Act 2004 and to date they have.  The appeal has been refused and in law, the BID must proceed and SBC must collect the levy.  If the new appeal succeeds any payments will be returned. Business owners should  consider the ways in which they can benefit from the BID rather than expend energy thinking about ways not to pay.  Mosaic promised, at a meeting at Green Lane, to help with  parking congestion, to improve signage and to improve waste collection facilities, and, if I recall correctly, fund an extra dog warden.

[Parking congestion is a ramification of visitor numbers already in excess of the town’s capacity; enhancing tourism can only exacerbate the problem. The DBID’s contribution to the renaissance/re-branding of the A171/A165 is a risible irrelevance. And “Hebo” should be aware that waste collection is a statutory duty of the Borough Council, already funded via Council Tax and Non-Domestic Business Rates – no place for DBID in that scenario. Conversely, an extra dog warden will benefit every tourism-related business immeasurably – i.e. negligibly, if at all.]

It is disappointing that the new administration chose not to honour the pledge to consult with businesses that I read out tonight but that is their prerogative and there is nothing that can be done about it.  Also disappointing is the reduction in attendees compared with the first meeting, and based on the turnout at the meeting held in  in Scarborough, most of whom were from Whitby anyway, I am disinclined to burn a gallon of petrol listening to the same crap from the same fizzwits.

[“Hebo” is obviously less ‘disinclined’ to be abusive about his electors – well, not really his electors, since not one of them voted him onto his booby prize seat on WTC. Yet he calls them “FIZZWITS”. being a non-word, “fizzwit” is not offensive per se; the intention is, however, manifest.]

I remain opposed to this DBID for the reasons I have already given but cannot be party to the actions that were proposed tonight.

For the avoidance of doubt, the email is not signed off “Pompous MacPisswhistle”.

This sorry email from Councillor NOCK prompted the following response from a former Portfolio Holder:

“How nice of John Nock to give you his feedback.

Just wondering why it was he lost the election?”
Could it be that, in his delusion, he expects electors to represent his views, and not he theirs?