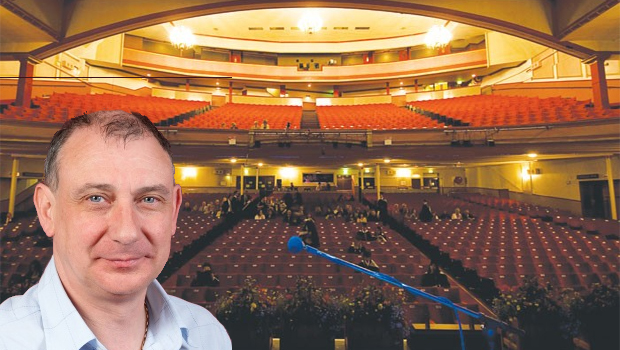 A Letter to the Editor from Councillor Norman MURPHY [UKIP], who writes to offer readers a clear account of the ill-conceived SBC strategy to destroy The Futurist Theatre – and a clear vision for its renaissance. The Enquirer salutes any Councillor with the nous and the cojones to denounce the folly and the fiction of the Emperor’s New Clothes.

As the Town Hall’s plans to demolish the Futurist Theatre move towards their final conclusion, with the inevitable death sentence being delivered in a no doubt one-sided report to Full Council in January, it seems odd that a Council who think they know the cost of everything, but actually know the value of nothing, should be so keen to spend millions of pounds destroying a valuable asset when they could spend less money to save it. Indeed even the most ruthless Attila the Hun in the Town Hall must know that, as things stand now, saving the Futurist is the most financially beneficial option.

Looking back to where we were in 2013, when the first serious moves were made by the Council to knock the Futurist down, and where we are now; the situation could not be more different. It is true that in 2013 it was easy for the Town Hall to make the case for demolition. The Town Hall’s finances, through local mismanagement and Government cuts, were desperate. With regard to theatre provision in the town, the Open Air Theatre was a financial car crash, the future of the Spa looked bleak and the operator of the Futurist was clamouring for more Council subsidy to keep it open.

The Futurist theatre was stuck in the vicious circle of lack of investment, going back decades, which had resulted in the fabric of the building literally falling apart. The ever-higher running costs resulting from the out dated facilities within the theatre were adding further financial burdens. Moreover, because the Council had failed to buy the property on the Blands Cliff side of the building the access needed to allow props and staging, which big west end touring shows need, could not enter the building – thus debarring this lucrative form of entertainment.

With all these problems, it is not difficult to understand that the Futurist was unable to attract big name acts, could not facilitate popular shows and, because it was cold and damp in the winter, even had difficulty attracting customers to block buster films. Therefore, with no hope of the Town Hall paying for renovation, no Council subsidy, no chance of obtaining the property next door and no one willing to step in and save the old girl, demolition was seen as the only answer to the Council’s Futurist problem. However, how things can change.

As mentioned not owning the property attached to the theatre on Blands Cliff, the old Mermaid pub (as was), was a major stumbling block and ruled out the possibility of staging the very profitable big touring shows such as Cats, Lion King and War Horse. Fortunately, however, this obstacle has now been removed. In 2015 the Council bought the property next door, using £500,000 of our money, and so now we own the whole site.

With regard to finding money to renovate the theatre, this is now also not a problem. In 2014, the operators of Flamingo Land offered to buy the cleared site for £600,000 to put a ride on it. This idea appealed to the Town Hall; consultants and engineers were hired, at huge cost which has still not been revealed to even Councillors, to see if the theatre could be pulled down without bringing down all the property behind it and how much it would cost. Their report on the stability of the ground has not, as yet, been made public and the contents are a cloesly-guarded secret within the Town Hall. However, what we do know is that our finance department, at Cabinet’s request, included in this year’s budget borrowing of £4 million to demolish the Futurist (yes I know borrowing £4 million to get back £600,000 is the economics of the mad house but this is Scarborough Borough Council).

Anyway, we now know that £4 million is available exclusively for the Futurist; this money can of course be used as the Town Hall wants, which is to demolish the Futurist; but equally it can be used to renovate the Futurist, it is going to be borrowed either way. So where, I hear you ask, does the saving come in. Well as anyone who has done up an old property will know you can spend and spend; renovation has virtually no limit, however, the cost of sorting out the Futurist’s major defects, that is knocking through from Blands Cliff, replacing the roof, removing the 1970’s cladding and repairing the facia, installing insulation and a new heating boiler is estimated to be about £3 million, or, in simple terms, about £1 million less than demolition.

However, with regard to finance doing the renovation does not just save money it also opens the door to new ways of running the theatre and attracting extra money. The establishment of a Futurist Theatre Trust; which several groups would like to create, allows applications to be made to various funding bodies. Once a project like the restoration of the Futurist gets underway then these funds can be applied for by the Trust and £3 million can quickly become many millions. Moreover, there are many friends of the Futurist who given the opportunity would be more than willing to help both financially and materially.

So we may see that both the financial and structural arguments in favour of demolition are overcome and restoration is perfectly affordable and feasible. However, there are, of course, two further cards the Council could play to justify their desire to demolish the Futurist and these are the questions of usage and long term viability. The very reason, they argue, that the Futurist must go is that when it was operational too few people were using it. But would this be the case now if the Futurist were renovated?

It cannot have escaped the notice of those in power in the Town Hall that in the last 10 years the popularity of all forms of live entertainment has grown hugely. Towns and cities up and down the country are reaping the rewards of large audiences using their theatres. Venues such as the Spa in Bridlington, theatres in Harrogate, Blackpool, and many other places, are hosting huge concerts, putting on spectacular shows, laughing at hilarious comedians and staging vibrant pantomimes.

Indeed, so financially beneficial is live entertainment that many local authorities are actively looking to either create or renovate theatres. The producers and performers, now, because of the internet and their inability to earn money from recorded performance now crave, and are thankful for, large theatres where they can actually make a good living. We are now in a new era of popular mass live entertainment and there is no doubt that, if the Futurist were restored, the public would willingly pay for their pleasure.

While we may be sure of the present day demand for live entertainment the argument of long term sustainability, which the Town Hall will inevitably use as an excuse to demolish the theatre, cannot be answered with such certainty. However, it should be remembered in the corridors of power that once the theatre is transferred to a trust responsibility for the present and future viability of the theatre is no longer the Council’s concern. The theatre, once restored, would be managed independently like the Spa and Open Air Theatre is now; free of Council incompetency.

Furthermore, the advance of modern technology, which has created the current environment and made it almost impossible for performers to make a living from studio recording, is not going to go away anytime soon. The public love live performance, and performers love performing, there is therefore every reason to be confident that the long term future of venues like the Futurist, should it be saved, is pretty much guaranteed.