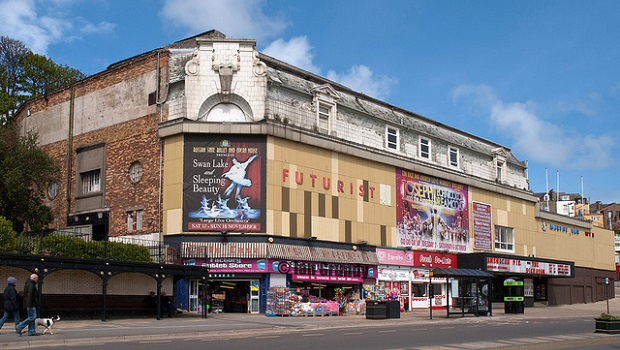 The North Yorks Enquirer has obtained a copy of a business plan for the Futurist Theatre in Scarborough. The plan has been created by the Save The Futurist Campaign has been sent to all Councillors.

The plan indicates that the group responsible for the business plan wish to retain, restore and regenerate the Foreshore Road theatre. The group aims to create a charitable trust and acquire a long term lease for the theatre from Scarborough Borough Council, possibly even with the council becoming a shareholder in the project.

Tory-dominated Scarborough Borough Council has previously awarded Flamingo Land Ltd preferred developer status for the Futurist site. It has since been revealed that Flamingo Land Ltd have recently donated £100,000 to the Conservative Party.

Geophysical reports suggest the method of construction of the Futurist Theatre is such that the theatre is actually holding Bland’s Cliff and King Street in place. Flamingo Land wish to demolish the theatre, build an attraction on the Futurist site and acquire public land, part of St Nicholas Gardens, as part of the deal.

The cost of the Futurist demolition and cliff stabilisation is thought to be at least £4million and it appears the millionaires at Flamingo Land and the Tory Councillors want we taxpayer’s to pick up the hefty bill. It is anticipated that the council may vote on those proposals on May 9th, but no agenda has appeared for the meeting as yet.

A copy of the business plan in displayed below.