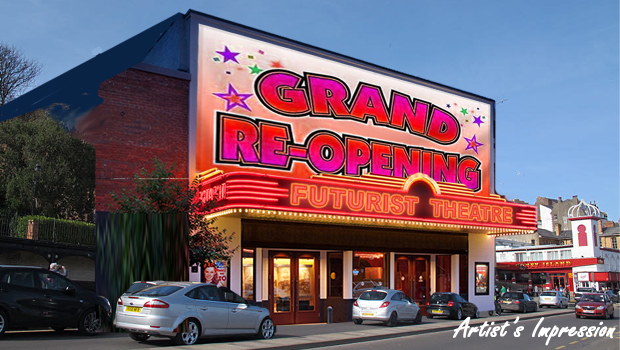 Scarborough Borough Council, in an unprecedented U-turn, has announced that, having secured eleventh-hour unsecured funding from the European Union Cultural Regeneration Initiative (EUCRI), a £9M 21st Century state-of-the-art, brand-new, singing-‘n’-dancing, humming-‘n’-toe-tapping Futurist Theatre is to rise from the sodden ashes of the town’s greatest tragedy – and comedy.

Widely decried by Opposition Councillors as facetious click-bait and a shameless Tory electioneering gambit, breaching both purdah and common decency, the announcement has yet to appear on the Council’s web-site.

Defending the decision, Alderman Enoch Wordsmith [Con.] told the Enquirer that this negative reaction was always to be anticipated from what he described as “the semi-literate churls and useless-eaters on the paupers’ benches across the Chamber”.

The future Futurist will include the CinéTech Multi-Media Complex, the ‘Viktor/Viktoria’ VIP Lounge and a ground-breaking ‘All You Can Eat For £100’ Gourmet Restaurant named (appropriately) ‘Les Champs-Élysses’, with its revolving whirlpool bar – ‘Le Salon Montmartre’.

Goodbye to Yorkshire supremo Sir Gerry Vanity, inventor of the Côte de Yorcques Heritage Egg-et-Spoon Race, has applauded the initiative, stating “Fantabulous location! Handy for VIPs who want to go for a quick dip. Erm, if you know what I mean?”

Work is to begin today, 1st April 2019 (known to all English-speakers as “All Fool’s Day”) – the forty-fifth anniversary of Scarborough Borough Council’s inception (will it ever see the big five-o?) – and is scheduled to open on Independence Day, 24th June 2020.