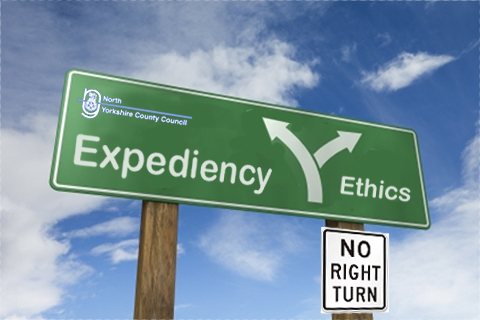 For the benefit of our many new readers, I should perhaps begin by explaining that I have been, for some years now, attempting to persuade our local Councils – Scarborough Borough Council (SBC) and North Yorkshire County Council (NYCC) – to address a series of apparent breaches of their respective Councillors’ Codes of Conduct. These Codes have been amended (with effect from 1st July 2012) in accordance with the terms of the Localism Act 2011, based (in theory) on the Seven Nolan Principles of Public Life (which have been amended, earlier this year). Under these revised terms, some breaches constitute criminal offences, addressable by the courts. The Nolan Principles are entirely reasonable in their aims:

(Readers who are familiar with the details of following recent examples of alleged breaches of the Code of Conduct may wish to proceed directly to the next section – Comparisons are Odious).

In a recent article of mine (”4,000 Hole In Blackburn Cover-Up” – 21/07/2013), I had occasion to mention in passing that, in the past five years, a grand total of thirty-five Formal Complaints against elected members of North Yorkshire County Councillor (NYCC) in respect alleged breaches of the Councillors’ Code of Conduct have come under the purview of the Council’s Standards regime. This information was provided to me by NYCC in a response to a FOIA request (FOIA).

The response also indicated that, of these thirty-five, only two were fully upheld – a ‘hit rate’ of only 5.7%.

I was not able, at that time, to furnish details of those two ‘successful’ Complaints, but thanks to NYCC Senior Lawyer (Governance) Moira BEIGHTON, I am now able to provide further details. I had asked her for clarification, thus:

Moira BEIGHTON has responded with the following:

Keep in mind that the Complainant was himself an elected member of a Parish Council.

Of particular interest in this second case is that the Investigating Officer was NYCC Deputy Monitoring Officer Stephen KNIGHT. Remember the name. We shall be returning to Stephen KNIGHT when we have dealt with the present matters.

I would be curious to know exactly how much of the taxpayers’ money has been squandered in pursuit of these 35 Formal Complaints that have boiled down to just 2 apologies and a chat. Perhaps I should ask?

It may be true that comparisons are odious; nevertheless, they can be instructive.

The cases outlined above concern relatively low-level breaches of the Code – ill-considered remarks, in emails or in person, that gave a degree of offence to the recipients. In comparison to some of the issues raised by the Real Whitby Magazine (and other publications) recently, involving the receipt of inappropriate payments from the public purse and use of privilege of position for personal gain, it is surprising (to say the least) that the two above complaints have actually been successful at all – and yet have resulted in such minimal and ineffectual sanctions.

But even on the topic of ill-chosen words, the above cases do not begin to approach the seriousness of (then) County Councillor Bill CHATT’s offensive email to Real Whitby investigative-journalist Tim HICKS:

I hate bully’s who pick, and pick. in my life in my circles people don’t make life difficult because they can, life is hard enough with out Internet trolls

In my view, those remarks go far beyond the “disparaging comment” attributed to the defendants in the cases outlined above. They are deeply insulting and ominously threatening. Coming from an elected member of (at that time) two Councils, they were incontrovertibly unacceptable in trhe extreme.

And yet NYCC refused even to address County Councillor Bill CHATT’s conduct (the language, the personal references to Tim’s mother, the threats of Police action) based on the untenable grounds provided by NYCC Monitoring Officer Carole DUNN – that his email was not sent from his NYCC email client and, therefore outside of NYCC’s area of concern. By that reckoning, County Councillor Bill CHATT could send similarly offensive emails to the Her Majesty the Queen from a Hotmail account, or similar, with total impunity as far as his position as a County Councillor was concerned. How does that sit with the Seven Nolan Principles of Public Life?

The case of the Formal Complaints against County Councillor John BLACKBURN is of a far more serious complexion. Initially, two independent witnesses maintained that County Councillor John BLACKBURN had claimed that he had subverted his Stamp Allowances over a period of several years, apparently in part to cover his electoral campaigns at the taxpayers’ expense – a criminal offence. He was exonerated by NYCC on the sole ground that he could not recall any such circumstance and maintained that he would anyway never have done such a thing. To make matters worse, NYCC Chief Exec Richard FLINTON appears to have wittingly prevented two further witnesses from being considered at all during Investigating Officer Catriona GATTRELL’s superficial investigation. And since then, another witness has come to light. How does all that sit with the Seven Nolan Principles of Public Life?

And then we have the on-going case against County Councillor Carl LES, Chair of the North Yorkshire Police & Crime Panel (and formerly Vice Chair of the North Yorkshire Police Authority, of which [then] County Councillor Jane KENYON was Chair), whose signed Mileage Claim Forms include claims for “impossible journeys”. This seemingly straightforward allegation, amounting to an offence under the terms of the Fraud Act 2006 (and therefore a Police matter), is apparently being “investigated” internally by NYCC’s own auditors Veritau Ltd (on whose Board of Directors we also find SBC’s Director of Business Support and s.151 Officer Nick Edwards – of Open Air Theatre fame). County Councillor Carl LES is himself a Director of Veritau Ltd. And so is NYCC CEO Richard FLINTON. But Richard FLINTON asserts that there is no conflict of interests here. How does that sit with the Seven Nolan Principles?

And speaking of Mileage Claims, County Councillor David JEFFELS who, having fraudulently claimed for travelling expenses to Conservative “Away Day” junkets, has now been obliged to repay his overclaim – thanks to Real Whitby’s Tim THORNE. No sanctions. No prosecution. And County Councillor David JEFFELS is just one of 45 Conservative County Councillors who, for all we are allowed to know (the data having been withheld, despite an FOIA request to NYCC), may well have done the same. How does that sit with the Seven Nolan Principles of Public Life?

In fairness, my remark was directed towards some purely hypothetical scenario more akin to the “Me Too!” scandal. But the principle remains the same.

And how prophetic that article turned out to be, at least in the case of Councillor Tim LAWN – currently under investigation by the North Yorkshire Police (NYP), following information provided by Corruption Buster Tim THORNE (again) to SBC and NYMNPA Monitoring Officer Lisa DIXON, ever “economical with the truth”, who, without Tim THORNE’s timely intervention, had previously contrived to take no action. How does that sit with the Seven Nolan Principles of Public Life?

According to a source intimately connected with York Potash Ltd, three additional referrals have since been made to the NYP, although no confirmation has been forthcoming from them, and NYMNPA Monitoring Officer Lisa DIXON has yet to respond to a request for confirmation. How does such conduct sit with the Seven Nolan Principles?

The conclusion to be drawn from the foregoing résumé is that ‘Expediency’ would appear to have all but eliminated ‘Ethics’ from the equation in North Yorkshire. The Seven Nolan Principles of Public Life, though admirable in intent, form no practical part of the ethical framework under which our Local Authorities actually operate – though they are, of course, required by law to do so. But the North Yorkshire Police assert that they will intervene only at the request of the Council.

So the ‘policing’ is left to the Monitoring Officers – all too ready to interpret the regulations in favour of elected members, with whom a symbiotic relationship appears to have evolved, thus establishing a sense of invulnerability in elected members amounting to an almost impenetrable carapace of secrecy and cover-up. They are confident that, if challenged on their conduct, they will be vigorously defended by the Council legal staff whose true duty is to police them. And even when ‘convicted’ (only two out of every thirty-five times, remember), they face nothing more daunting in the way of sanctions than having to write an apology (of questionable sincerity) and receive a few words of ‘guidance’ from the Monitoring Officer. Then they are free to go back out into the world and behave like feudal barons all over again.

The truth is that public servants, paid or elected, are apparently above the law in this country.

Surely, Lord NOLAN would turn in his grave . . .

But let us not despair; the scrutiny continues.

I now notice that I have forgotten to return to NYCC Deputy Monitoring Officer Stephen KNIGHT. My apologies; I will address that topic in another article. 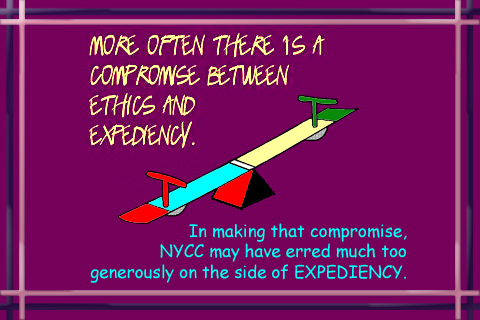