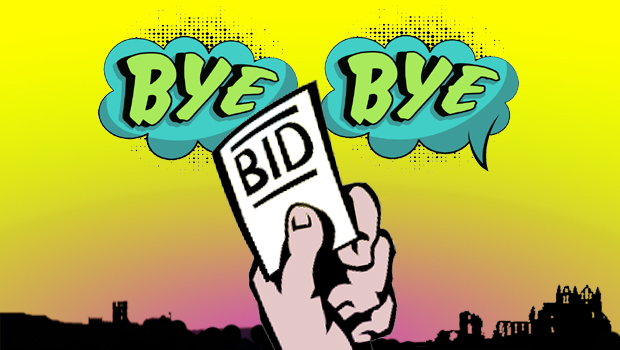 A Letter to the Editor from a Scarborough Borough businessman typical of several received, but perhaps the most clearly articulated, on the controversial subject of the Yorkshire Coast D-BID. Councillors would do well to read and digest with great care and attention.

Mindful of then-Leader Cllr Tom Fox’s ominous remarks about the Council’s capacity to deliver “threat and retaliation”, the writer’s name has been withheld.

When I was given a presentation by the Yorkshire Coast BID Team last July, I said it would not work as the span of control was too big and no one can work for 7 master’s (areas on the coast). Also, the requirements for each of the main towns, including Redcar are different to the others or anywhere else on the coast.

After the vote, I found out that Redcar & Cleveland dropped out and this was not pointed out in the final Business Plan unless you studied the map against the previous version.  Redcar had worked out that the BID was not value for money and states the same in their official minutes. This change from the September Business Plan (i.e. Redcar have pulled out) should have been pointed out to Voters, as opposed to sneaking it through unmentioned.

With other businesses, I voted ‘NO’ on the basis it would not work and it might as well be culled at birth, as I too had worked out there would be massive inefficiency, and as said before, the BID leaders cannot answer to 7 areas at the same time.

However, I did remain luke warm as it was a way of funding a Tourist Information presence in Scarborough and Whitby via a Pop up stall/shop in the towns during the peak season and I should get back some of my enforced investment through additional visits to my attractions.

The inefficiency of the organisation and inability to be able to deliver is clearly shown before it even gets off the ground in that the first time I heard it had been successful was on Yorkshire Coast Radio in late December/January that the successful vote was being challenged. Prior to that, I just assumed it had passed.  As of today, on their website the most up to date news is June 2018 http://yorkshirecoastbid.co.uk/news/ . Also, re-reading the aims in the final Business Plan , there is nothing that is specific and measurable, just nice flowery woolly talk. When I worked in Industry, if I had submitted that as a five year plan for a £1m+ a year turnover business, I would have been sacked on the spot.

Being told that this is going to be the best thing since the Vikings invaded the area and to endorse the forthcoming success they will be delivering, I would have thought a circular letter would have been emailed out immediately after the Vote endorsing the success and those involved thanking all who took the time to vote. The first correspondence received was four days ago, inviting me to join the group.

However, this has issues and is clearly written by someone who does not understand how business works or how to sell an idea.

In the rules it states

Yorkshire Coast Business Improvement District is a company limited by guarantee. As such, it has members rather than shareholders, who are each entitled to: • Receive a copy of the company’s annual accounts; • Attend general meetings and cast a vote; • Elect directors by voting at the members’ meeting.

Members must work in the best interests of the company and its objectives and in supporting and ensuring the delivery of the agreed Business Plan. Rules set out in the BID Company Articles of Association and those of Companies House relating to the conduct of members/directors will also apply.

Also, you must confirm that you are not employed by a Local Authority.

As a Business that is going to have 1.5% of rateable value taken I would expect that financial information, successes, failures, voting and election of the top brass would be automatic. The second part is basically saying that you must be a ‘YES’ person and you cannot challenge anything.  Sounds like this was written by a SBC Officer and if it wasn’t I hope they do not pay their bill.

I do not understand why this paragraph is in the rules

10) By signing this form members will also confirm that they have not been disqualified from standing as a Director of a Company or been have convictions relating to financial or company wrongdoing.

What has my financial standing or whether I can stand as a Director got to do with membership? It is nothing to do with them. As it happens, I run a number of Companies/Businesses and have no problem, but someone may have an issue and cannot join.

Members are required to treat all communications and discussions of and relating to Company business, verbal and written as confidential and not to be discussed, distributed or used in any way unless agreed by the Company Board.

So they want the cash and then if you disagree with the proposals you cannot challenge or talk to anyone about it!  If the 100 or so Whitby Business people and any others are unhappy decide to join, the letter explaining the reason they cannot is going to be interesting.

This is backed up in the Articles of Association

2.3. No person shall be admitted as a Member unless he supports the aims and objects of the Company and wishes to take an active part in the support and furtherance thereof and his application for membership is approved by resolution of the Board. The Board shall not be required or obliged to give reasons for refusal of any application for membership which shall be at the Board’s absolute discretion.

Again, you must not challenge what is proposed.  Also, it does not allow for meeting number 1 for anyone to comment on the ‘cock up’ and propose a Vote of No Confidence in the process. It is in to avoid all disgruntled members turning up at a meeting to propose the closure of the business with a Quorum present.

This is an ineffective paragraph as anyone who wants to join the company cannot if they are employed by a Local Authority.

This adds a further question as to why the Council can vote in the first place – the 71 votes, if they cannot send a representative other than the ‘Official’ one. This is being sold as a Business-to-Business benefit, not a Business/Public Authority initiative.

For the Council to pause the vote and allow the debate to happen at a full Council Meeting next Friday, they must consider that someone is on dodgy ground and the success of the vote is going to be tarnished for the next 5 years with attendant criticism of anything that takes place.

Success has many fathers.  Failure is an orphan – and this falls in the latter category.

All the very best,

Since writing this, I have researched Redcar & Cleveland and the reason why they are not on board. Basically, they see that similar things can be delivered more efficiently.  The minutes of their meeting in July and October when it was put on one side are below.

This adds a further potential issue re the validity of the Ballot.

I  receive the Ballot papers between the 7th and 14th November and the blue final document turned up sometime after that. I cannot identify the exact dates.

With the Redcar vote being on the 25th – 5 working days before the month end – to amend the final document, or indeed re-print it (as it must have already been done – or is this another inefficiency) and post it within the 5 days remaining, so it  arrives by the 1st November to make sure everyone has the full facts, would be difficult for most businesses and impossible for the Council. On the basis that the only information to hand at the beginning of the November was the September printed document, I am sure that, like me, some people have voted on the wrong information – i.e. Redcar & Cleveland are not on board.

Also, as mentioned before, I see this as a cover-up as the problem with the documentation not being to hand at the beginning point of the vote should make it invalid. Also, someone is responsible if there is a cover up to presumably protect themselves. On my behalf, as both a Business and personal Ratepayer to the town and a potential enforces member of the BID, please can you ask for a FOI request to identify him/her as I am sure that members do not want to be in an organisation where there is deceit before it is even formed. Also, within the FOI the exact timetable of events re posting out the Ballot and the final document. I do not know how to submit a FOI, but I know you do. 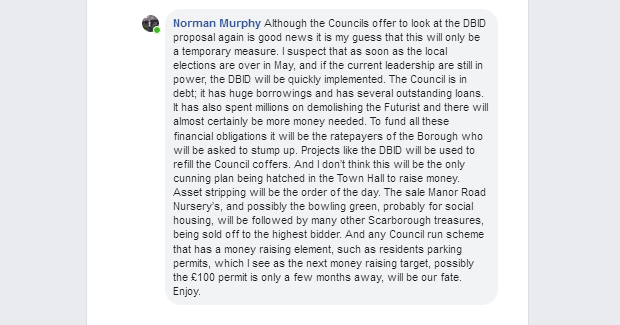 How the D-BID costs/benefit game is intended to pan out:

Which premises were qualified to vote?