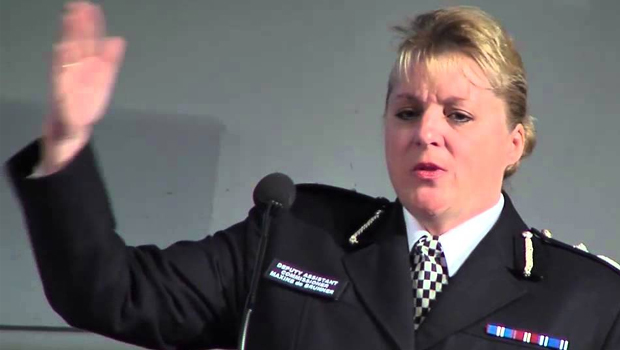 When I wrote my article “‘Leadership by Example’ and Chief Police Officers”, covering the fall from grace of Deputy Assistant Commissioner Maxine De Brunner of the Metropolitan Police (because she is alleged to have benefited personally from misuse of police resources valued at £10,000 for personal purposes in 2014, and tried to do so again in 2015 by diverting specialist Police Officers and vehicles from operational duties, to support her private hobby/interest – membership of the Board of a private school), I thought it would be a one-off article. 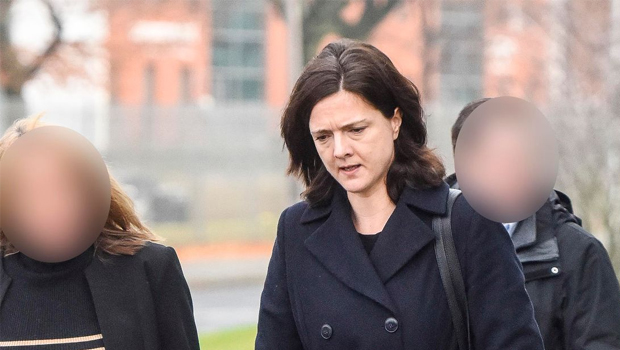 However, even more bizarre goings on have compelled me to write a follow-up. I refer, of course, to the recent case of Assistant Chief Constable Rebekah Sutcliffe of Greater Manchester Police (pictured above), who has just been found guilty of Gross Misconduct by a misconduct hearing for verbally abusing a junior colleague and flashing her breasts in public at the Manchester Hilton Hotel, whilst drunk at an official function she was hosting. According to the Daily Telegraph, the cause of this altercation was Assistant Chief Constable Sutcliffe’s views on another officer, Superintendent Sarah Jackson (pictured below), who had recently undergone breast enhancement surgery. 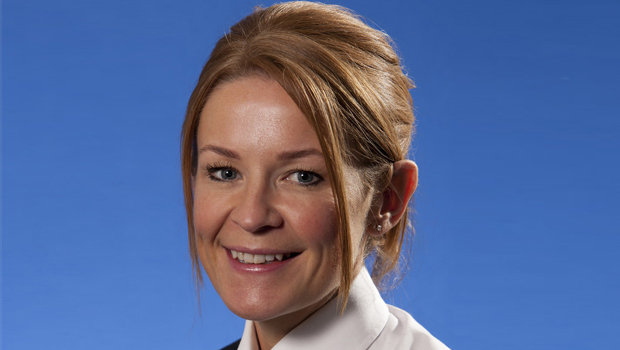 Clearly a sensitive and personal decision which was nothing to do with anyone else.  ACC Sutcliffe gave her a tirade of abuse over this, ridiculed her, stated she would not support Superintendent Jackson’s future promotion, ridiculed her body and then exposed her own breasts in the bar of the Manchester Hilton Hotel.

Incredibly, ACC Sutcliffe admitted bringing discredit on the police service but asserted in the hearing that her behaviour was misconduct, not gross misconduct. Nevertheless, she was found guilty of gross misconduct by the panel. It recommended that she receive a written warning, rather than summary dismissal from the service.

So far as I am aware, ACC Sutcliffe is the most senior officer to face a public hearing since they were introduced.  For lower ranking officers a misconduct hearing’s ruling is final, but for a Chief Police Officer, the Chief Constable can overrule it.

There are a number of things that cause me some concern with this case.  Gross misconduct as usually referred to in the private sector means an act so outrageous that it is sufficient to justify being summarily dismissed and marched off the premises.  In this case, the panel has found ACC Sutcliffe guilty of gross misconduct but she has not been dismissed.  Certainly, if any employee of a bank or insurance company got drunk at an official function, discussed a colleagues personal medical details in public, or revealed confidential information on recommendations on promotion in public, abused a member of staff, and then topped it all by exposing him or herself, she would lose her job.

The police arrest people for exposing themselves in public with great force, as shown in the photo below.  (These are protesters against countries that prevent women from participating in sport, not Chief Police Officers – full story here). Yet the panel has recommended that ACC Sutcliffe will, at worst, get only a written warning.

The case will be determined by the Deputy Chief Constable of Greater Manchester Police and I will report on the outcome in due course. 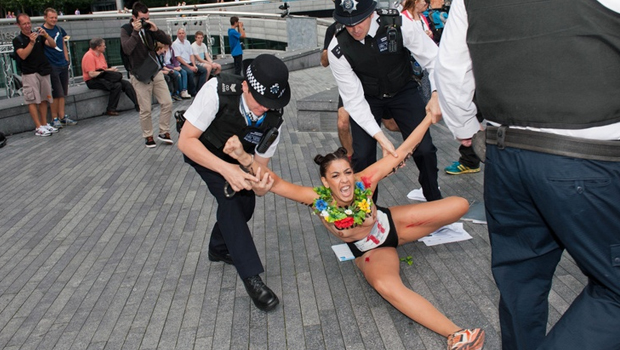