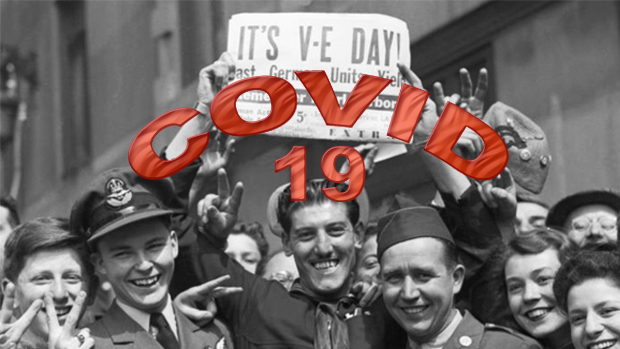 A Letter to the Editor from IAN DIXON, expressing his concerns regarding the nature of “the new normal”.

Who would have predicted a year ago that our country would be in the state it is in now?

We now face the greatest threat to freedom since WW2, after just celebrating VE75.

The Coronavirus has meant our civil liberties have now been taken away and we are living under Police Enforcement, with the threat of being shopped by neighbours to the Police. Is this not what our forefathers fought to stop and thus ensure our freedom?

Now we live in a world with various forms of media and news it is not always possible to know what to believe. Of course, the mainstream media and government are telling you that a lot of stories on the internet are conspiracy theories and fake news, but are they telling the truth?

Is the Corona threat really as bad as they say, or is it a trial to see how far they can control us.

A point I would like to ask is how long can so-called social distancing go on for? If distancing is going to be long term, it means – to name just a few things – no spectated shows, fairgrounds, sports events, marches and rallies.

Conveniently, no protests as well!

How are new personal relationships going to happen if you have to stay 2 metres apart from strangers?

I go to a shop and have to stand 2 metres apart in a queue, yet people jump into taxis and sit next to the driver?

I keep getting emails about holidays. Who the hell is going to be able to go to Spain for a holiday in the near future. 2 weeks holiday followed by 2 weeks quarantine. I don’t know of many jobs where you can take four weeks off in one go.

There are only 2 real options I can see with this Coronavirus; allowing it to run its course or vaccination. They are the only options to resolve it. Social distancing can’t be enforced for ever and is not practical in large population centres.

Another big question is what happens next winter? We all get coughs and colds, some people 2 or 3 times over winter. How do you know whether it is just a normal cold or flu?

Are we being told the truth about how long this virus has been about for? I have spoken to lots of people who in the New Year had a very bad cold/flu with a terrible cough and chest pains.

I myself was in Edinburgh for Christmas. The place was packed with Chinese tourists. A few days after Christmas, I had a cold/flu, my coughing was so bad I was having to take pain killers in the night for severe chest pain. I never went to the doctors so was never diagnosed.

The whole handling of Coronavirus has been a total shambles from the start – or was it planned that way? I remember driving home from work in the early stages of the Epidemic and hearing on the news there were somewhere in the region of (I think) 51 cases. Well, why was nothing done then instead of letting things get out of control?

Tens of thousands of people kept flying into the country without testing from all parts of the globe. Now we will be having to go into quarantine after returning from abroad. A bit late now, I think. Nigel Farage was correct in one of his posts in saying we were flying the disease into the country.

Of course, the Media and Police condemned him recently about making a film about migrants coming into the country. They said he flouted lockdown rules. He posts broadcasts, stories in papers, etc, so as a part-time journalist, he had valued reason to not go along with rules regarding travel. BBC and other channel’s send reporters all over the country.

No, the problem is the establishment don’t like being confronted with the real facts or truths. The real question who is going to pay for all this?

This will also mean with Coronavirus distancing no car sharing, so more cars on the road.

At the start of the year we were all looking forward to a reasonably secure future, now we face a  possible depression and massive job losses. No way is the economy going to bounce back, some people are that terrified of the Coronavirus threat they won’t be going to places with lots of people, even if lockdown is eased.

Some people have been furloughed, but a lot have actually lost their jobs and many self-employed have ended up with nothing. One of my friends has cashed his pension in, just to survive. People are going to be careful about money after the lockdown. Many people have an uncertain future.

But the final question or point is why nobody is really getting to the bottom of the real truth behind the Coronavirus, or don’t they want us to know the real facts, or who is really behind it?

Whatever the outcome, our lives and civil liberties will never be the same again.

We have human rights courts and bills, yet in a stroke our liberty has been taken away. What price democracy?