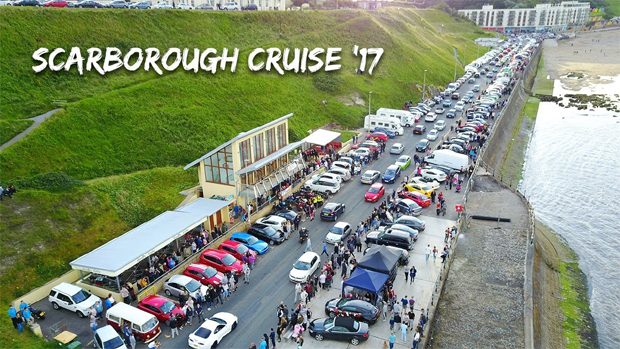 A Letter to the Editor from popular Scarborough contributor Ali WILKINS, commenting on Scarborough Borough Council’s Public Space Protection Order policy (PSPO) in relation to the Scarborough Car Cruise – and other (wisely unspecified) organised events in the Borough.

I was shocked to hear, at the recent Cabinet meeting, that the annual Car Cruise is being blocked by SBC/Police and NYCC with application to the next full Council for a PSPO which would incur fines of £100 and possibly up to £1,000 for anyone daring to participate without Council approval. I know this has come about mainly because a sad individual did damage to the tune of £47.5k (Council figure) last year by performing a ‘burn out’ on the new tarmac. He was taken into custody by the police and subsequently successfully prosecuted. I wonder how popular his performance is now.

I am disgusted by his ‘performance’ – but this has been an annual event without issue for many years. Thousands come to enjoy the amazing cars proudly displayed. But because the event is unregulated there is nothing to stop an idiot showing off like this. I would have liked to have seen authorities working together with car clubs to enable these events, rather than hurriedly slapping a PSPO on it.

There has been no talk of the publicity. A look on the internet shows how high this annual event is on their calendar and how much Scarborough has been appreciated. It has been praised highly over the years and is eagerly anticipated.  After all, it does attract thousands and publicity on social media by enthusiasts is priceless.

Instead we have comments from Councillors like Cllr Andrew (“I aren’t bothered”) Jenkinson, who leapt in with:

“They don’t bring any money here, they just turn up, make a mess then leave. I’d fine them £1,000 personally.”

He was backed by Cllr Bill (Mr Hospitality) Chatt who added:

“It is time to tell these people that they are not welcome here.”

Apart from this being very rude, it is totally uncalled for and very wrong of the Council to tar all participants and supporters with the same brush.

If owners can afford to spend £1,000’s on their cars then of course they will spend elsewhere – they have to eat. Enthusiasts bring their families and if they like what they see they will come again. I believe they will explore the town – if only in search of toilets!

‘We want to stop the anti-social behaviour that takes place around this event. The Public Space Protection Order is for the whole of the borough so that we’re ensuring that this doesn’t take place anywhere within our area. It really is the danger to the public that we’re concerned about.’

Isn’t this a bit hypocritical?

Other events attract anti-social behaviour to our town, yet despite numerous incidents there have been no concerns about the safety of the public to rush to impose PSPO orders on them.

Instead, there is increased Police presence, we pay for security etc., and there are strict timings on the length of the events. As a result, there has been an improvement. Cannot a similar model be applied to car events?

Arguments in support of the Car Cruise were extremely well put in the 50+ letters against the PSPO in the documents for the Cabinet meeting:

I was delighted to read in the press that despite the rude remarks and accusations by Councillors, the event did take place on 19th June and, as stated by a supporter, went without a hitch – and there were long queues for food and no litter. Well done to them for taking this stand! It is very sad that it was billed as the last one.

If this PSPO is passed by full Council then it is only right and fair that PSPO’s are implemented, and enforced with similar fines, for ALL events which bring anti-social behaviour to the Borough.

I hope Council will look at the bigger picture, take a big slice of humble pie, and communicate with car clubs to find a way forward.

At the end of the day, we are a tourist-based town. Please – let’s attract tourists, not ‘drive’ them away.