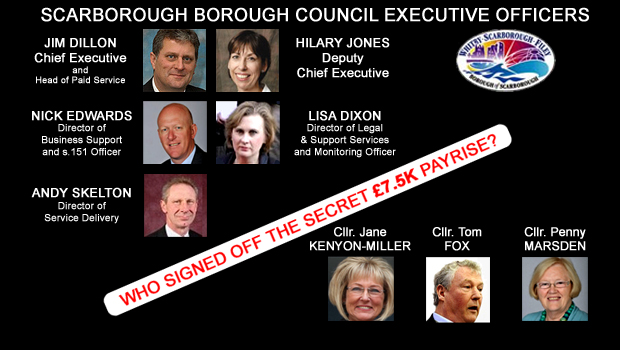 The North Yorks Enquirer has had an anonymous tip off that all five senior officers at Scarborough Borough Council (SBC) have received a large pay rise around the start of the year. The pay rise is reputed to be worth £7,500 to each of the senior officers.

The news will likely be greeted with dismay by many at the council. The rest of the workforce has been in protracted negotiations regarding an annual rise for the year, with industrial action currently being balloted by their union.

The senior SBC officers said to have received the large pay rise around the start of the year are:

Did A Committee Decide?

Under normal circumstances, and according the SBC Constitution, pay rises for senior council officers are decided upon by elected members at full council.

The Constitution states that ‘Only the Council will exercise‘ the matter of the ‘appointment, dismissal and terms and conditions of the Chief Executive (Head of Paid Service), the Deputy Chief Executive and Directors‘. Given that the matter of chief officers pay for 2014/15 has not been on the agenda, full council appears not to be responsible for the pay rises.

Did A Person Decide?

SBC uses the cabinet system. Elected members that are part of the cabinet are given a portfolio to manage. It is well known that cabinet members can decide upon certain matters without consulting the council, providing the cost of the expenditure is less than £140,000.

Although it is doubtful that the Constitution can be interpreted in such a way as to give a cabinet member the power to decide upon senior officer pay, perhaps a cabinet member has been advised by an officer they do have the power as it is part of their portfolio. If that is the case, then whose portfolio could it fall under?

Tom Fox, as leader of the council, appears to be able to decide upon most things, but was he responsible for signing off the pay rises for senior officers?

Jane Kenyon-Miller, as the cabinet member responsible for Finance, could be perceived to have the remit to decide upon financial matters, but was she responsible for signing off pay rises for senior officers?